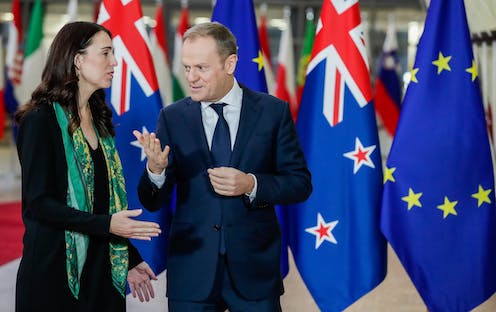 Last year, the European Union (EU) launched negotiations for a comprehensive free trade agreement (FTA[1]) with New Zealand. This was seen as a bold step that may significantly boost trade and investment between the two parties.

Two rounds of negotiations have since been concluded[2] successfully, but talks could take two to three years.

The EU is one of New Zealand’s major trading partners with which it has no FTA. Partnering with the EU represents an opportunity for New Zealand exporters and access to the world’s largest single market with transparent rules and regulations, with almost 500 million consumers.

Here I explore the trade issues[3] the partners are likely to face during the negotiation process.

In 2016, New Zealand’s two-way trade with the EU accounted for around NZ$8.8 billion of exports and NZ$12.1 billion of imports in goods and services.

Traditionally, New Zealand largely exports agricultural products to the EU, while manufactured goods dominate EU exports to New Zealand. There is a clear difference in the types of products that dominate imports and exports between the two parties.

In 2016, New Zealand’s top exports to the EU were sheep meat, wine, fruits and wool. In the same year, the EU primarily exported industrial or mechanical goods such as cars, aircraft, medication, tractors, trucks and vans into New Zealand.

As New Zealand and the EU have no bilateral trade agreement but are both members of the World Trade Organisation (WTO[6]), they trade on the most-favoured-nation (MFN) principle. This was mostly established through a series of negotiations in the General Agreement on Tariffs and Trade (GATT[7]). With regards to a free trade agreement, New Zealand and the EU both face issues that may prove stumbling blocks. In particular, this could affect trade in agricultural products.

New Zealand is a small and open economy, dependent on international trade and market access to key trading partners. The EU provides a stable market for New Zealand’s exporters. As New Zealand agriculture experiences minimal government intervention, it is market oriented. Measures such as export subsidies for agricultural goods do not exist.

New Zealand has relatively low tariffs for most products, making market access easy for the EU. In particular, New Zealand’s tariffs on imported agricultural products[9] are considered to be the lowest in the world. Import quotas and licensing as a method of protectionism do not exist. Conversely, in the EU, agriculture is heavily protected and subsidised and as such the EU has relatively high tariffs and other trade restrictions, especially for agricultural commodities.

Furthermore, in the EU the share of other types of tariff rates (such as compound and specific tariffs) is high, providing a greater degree of protection. Tariff quota is one of the border protection methods used in the EU to limit the quantity of agricultural products imported. For New Zealand, this means access to the EU market is currently limited.

Prospects for the FTA

By trading with the EU on the MFN principle, New Zealand faces relatively high tariffs on its agricultural products in the EU market in comparison to some of its competitors. If New Zealand were to gain free access and liberalise trade in agricultural products, it would stimulate more exports to the EU, resulting in an increase in producer returns.

EU farmers fear that once agriculture is liberalised, New Zealand dairy and meat products will flood the EU market. But this is unlikely to happen based on the economic modelling results[10]. My research[11] suggests the EU might import more of some agricultural products from New Zealand than before. But regarding total trade, the EU would stay a net exporter of the same products, and EU production and consumption would not be negatively affected by the FTA.