Christmas trees in the aisles. Baubles hanging from the ceiling. Carols playing on the in-store speakers. Tinsel around the cash register.

Shops put a lot of effort into Christmas decorations. It’s in their interest to associate themselves with the celebration, and to encourage shoppers to think spending up big is part and parcel of its enjoyment.

Is this overt commercialisation of Christmas drowning out its true spirit?

Read more: Five tricks retailers will use to make you shop this Christmas[1]

Not necessarily, according to research[2] by myself, Jimmy Wong from the Singapore University of Social Sciences and Riza Casidy from Deakin University.

We have found that seeing Christmas symbols – even a secular one – can evoke religious values in service contexts. Customers who had a Christian upbringing become more forgiving of poor service they personally receive but also more judgemental of any poor service they observe being meted out to vulnerable others.

The religious spirit of Christmas

Our research adds to a small but growing body of research on how Christmas affects attitudes and behaviour. Previous research has suggested that mere exposure to the word “Christmas” can evoke charitable behaviour[3], that Christmas displays improve the mood[4] of those who celebrate Christmas, and that displaying outdoor Christmas decorations can make a household appear more welcoming[5].

Our results reinforce these findings. They show the strength of Christmas’s religious roots despite commercial and secular interest in de-emphasising the connection to Christianity.

For people brought up in a household where Christmas was primarily a religious celebration, encountering a Christmas symbol reminds them of religious meanings and values.

This effect did not depend on them still being a Christian. This shows the associations that children in Christian households develop between Christmas and religion remain potent long after childhood. 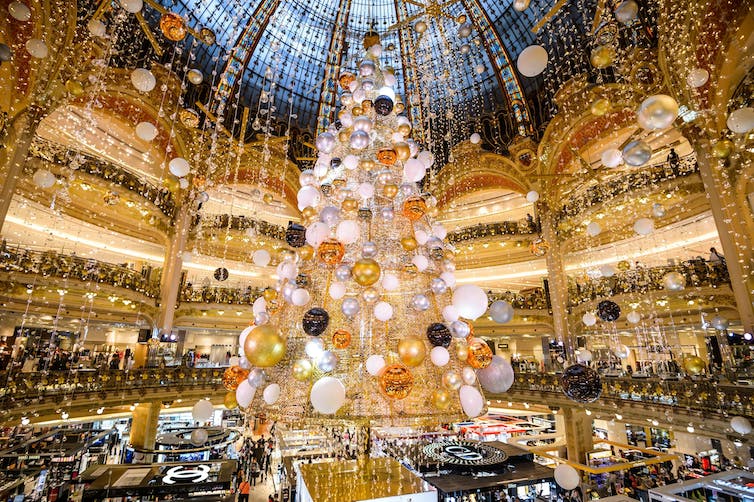 Across seven experiments, we presented more than 1,500 participants with scenarios describing various types of poor service.

Accompanying these scenarios were various Christmas symbols. In one experiment, we had participants listen to Christmas carols or nursery rhymes. In other experiments, participants were shown images of where the poor service took place. Included in the background of some of these images was a Christmas tree.

We found that the mere presence of these Christmas symbols was enough for people with a Christian upbringing to judge the poor service less harshly, become less likely to warn others about it, and be less likely to switch to another business.

In our research, people with a Christian upbringing also became more concerned about the welfare of others after seeing a Christmas symbol. In particular, they more critically judged poor service involving someone they regarded as vulnerable (an older person, for example). They were also more likely to warn others about that poor service and to switch to another business. 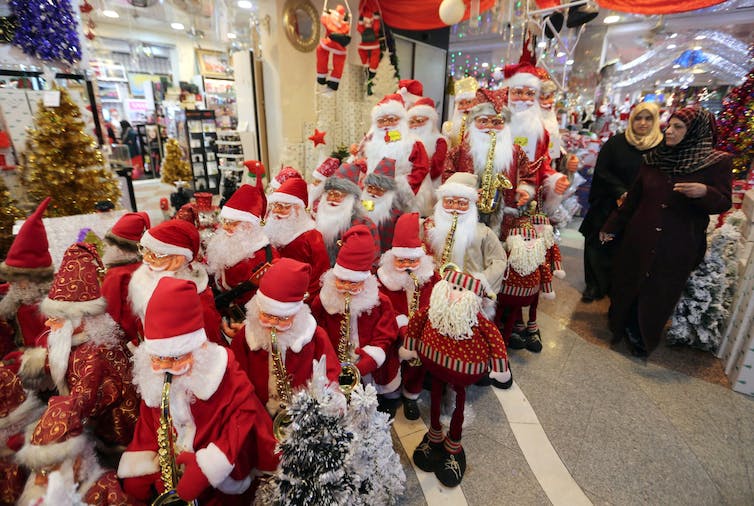 Christmas decorations for sale in a shop in Baghdad. Christians form about 5% of the population in Iraq. Ali Abbas/EPA

Read more: The psychology of Christmas shopping: how marketers nudge you to buy[6]

These findings point to some interesting conclusions.

Although stores may try to co-opt Christmas symbolism for commercial gain, it seems these symbols can not be completely disconnected from associations established by Christianity.

Sometimes, such as the negative responses that occur after seeing a vulnerable person experiencing poor service, they can lead to outcomes where the true spirit of Christmas really does undercut a firm’s self-interest.