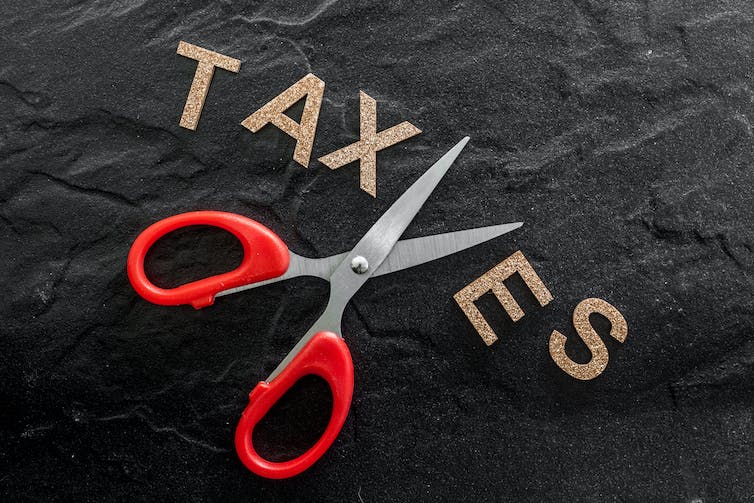 The recent U-turn[1] on cutting the top rate of income tax has shown that even a government willing to “do unpopular things[2]” to grow the UK economy is constrained by the need for public support.

The negative public reaction to chancellor Kwasi Kwarteng’s September 23 mini-budget came in part from its impact on Britain’s economy[3]. But even before the financial market reaction, the design of the Conservative fiscal plan shows Truss believes that getting the right set of economic policies for growth means paying less attention to public opinion[4] about taxes.

Certainly, governments need to raise revenues, and cutting taxes is often politically advantageous. But the popularity payoff in terms of “bang for buck” varies because some taxes are more popular among voters[5] as a way to raise revenue than others. Cutting the most hated taxes, therefore, should deliver more of an electoral boost than cutting those that are more popular.

UK prime minister Liz Truss has said she is prepared to “do unpopular things” to boost economic growth.

It is hard to compare which taxes are more unpopular, however. This is because they take different amounts of money, as well as being different types of tax. So, to work out which are the most or least popular ways for the government to raise revenues, asking people to compare tax increases or decreases with the same impact on revenues is useful. For example, you might ask someone: “If you could choose, which tax would you cut to reduce government revenue by £1 billion?”

As part of our ongoing research[6] into attitudes towards government budgets, we conducted a survey[7] last year among a representative sample of the UK public that asked such questions, based on tax rate and threshold changes that would lead to the same revenue increase or decrease. We gave people a choice between two specific options. This let us measure the relative popularity of different taxes as a means of raising revenue, and the reverse – the relative support for different types of cuts (that is, changes that reduce the overall tax take).

We found that people were not keen on cuts to corporation tax, alcohol and tobacco duties, and the higher and additional rates of personal income tax.

But these were almost exactly the same as those the government chose to cut (or cancelled proposed raises for) in September’s mini-budget. The abolition of the 45p rate of income tax was the fourth most unpopular way to cut taxes out of the 23 options we presented.

Not all of the changes announced in the mini-budget were unappealing to our survey respondents, however. Reversing the changes to National Insurance and cutting the basic rate of income taxation have more support among the members of the public that we surveyed. But more of the public would prefer increases to the personal allowance and the higher rate threshold as ways to reduce the income tax burden.

The fact that the government chose otherwise is not simply a case of trying to appeal to Conservative voters either. The evidence indicates that these preferences are widely shared across the population, as well as among Conservative voters.

This is also not a case of the government simply appealing to the better off. Those with incomes above £45,000 hold very similar views to those with incomes below that amount, our research shows. And, if anything, they are more supportive of maintaining higher rates of tax on corporations and higher personal incomes.

These findings indicate that preferences over the composition of taxation are not especially driven by a “tax someone other than me” dynamic. Rather, there is widespread support for the broadest shoulders to bear the heaviest loads – even among those likely to bear the brunt.

So, what taxes could the government have suggested cutting if it wanted to align with popular preferences? We already noted that increasing the personal income tax threshold would be a more popular giveaway. Equally popular, according to our survey, and widely recognised as necessary[10], are reforms and reductions in council tax. Indeed, when pitted against corporation tax, our research shows the public prefer cuts to council tax 68% to 32%.

These patterns suggest that we should take Truss’s stated desire to pursue unpopular policies to achieve economic growth seriously. Truss and Kwarteng clearly believe the public are wrong about tax policy because the cuts they have chosen to make are relatively unpopular among the public at large, Conservative voters and even higher earners, who will benefit most directly from them. So these are the tax cuts to choose when you do not feel constrained by public opinion.

Unfortunately for the government, since concerns about its tax policy are shared by its own voters and its MPs, it may not be able to continue ignoring the constraints imposed by public opinion.