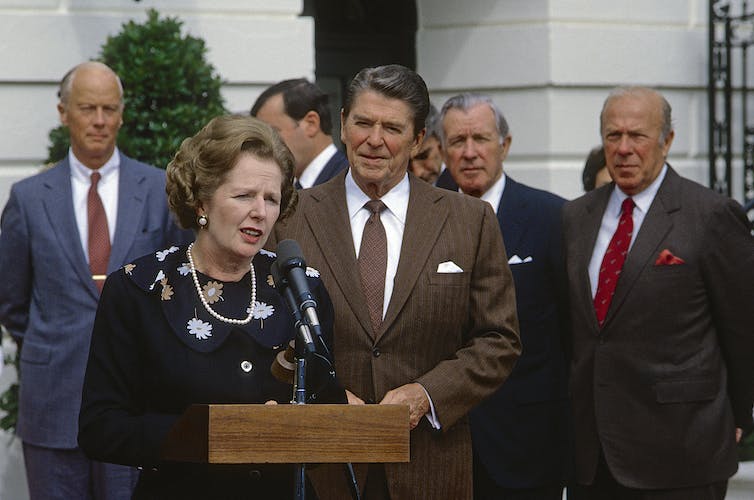 So what is the prime minister thinking exactly? Is she an economic outlier, or are her ideas a modern interpretation of tried and tested policies of the past?

There has been much discussion for instance, of “trickle-down” economics, where the idea is that increased wealth for the richest is eventually passed on to the poorest. Plenty of talk too of “supply-side” economics, and the theory that decreased regulation and lower taxes leads to lower prices and more jobs.

At first glance then, Truss has aligned herself with some of the core ideas introduced to British politics by her predecessor, Margaret Thatcher, which have dominated the Conservative party’s economic thinking for the past 43 years.

Back in the 1970s, Thatcher and her close adviser Keith Joseph had sought to persuade people that Britain needed a “social market economy”. The think tank they founded together (in 1974) describes this as one in which[4] “responsible policies work with and through the market to achieve wider social market aims”.

Thatcher and Joseph’s reappraisal (in opposition) of economic and social policies, and their delivery (in power) of privatisation and market deregulation, were designed to deliver a “sea-change in Britain’s political economy[5]”.

Her proposal (before it was dramatically ditched) to cut taxes for top income earners, stems from a belief that such moves will encourage innovation and investment. The theory is that the newly created wealth would then improve the lives of everyone else.

But is there any evidence that such ideas and policies will work?

Supply-side and trickle-down economics have indeed been tried before, notably by the US president (and Thatcher ally) Ronald Reagan. He promised[9] “sound money, lower tax rates, and a vast curtailment of federal spending, welfare, and subsidies” in what he described as the “only recipe for sustained economic growth and social progress”.

In political terms, Reagan’s policies could be described as successful for the Republican Party. He was re-elected in November 1984, and his vice-president, George H.W. Bush, became president in 1988. In terms of economic growth though, they were a failure.

Reagan and Thatcher at the White House in 1983. Shutterstock/mark reinstein[10]

For while Reagan had promised to cut federal government spending, over two terms of office, he actually increased the United States’ historic national debt by 186%, from US$907 billion to US$2.6 trillion[11].

One of Reagan’s advisers, David Stockman, wrote a memoir[13] setting out the demise of supply-side and trickle-down economics, and concluded that the “Reagan revolution” was “radical, imprudent, and arrogant”.

He added that the policy failed because “the spending reductions needed to pay for the tax cuts had turned out to be even bigger and tougher than I had originally thought”. They would, he said, have required “a full-frontal assault on the American welfare state”.

Back in the UK, research[14] into the impact of tax cuts and deregulation on UK growth performance, shows that every United Kingdom government since Thatcher’s first term (1970-1983) has delivered a slower rate of economic growth.

Separate research[15] on the impact of trickle-down economics from 1965 to 2015 in 18 wealthy countries revealed that cutting taxes for the rich does not have any significant effect on growth performance or levels of employment. But it does lead to higher income inequality.

Reagan’s adviser Stockman has warned that what he calls[17] the “abortive Reagan revolution” eventually “proved that the American electorate wants a moderate social democracy to shield it from capitalism’s rougher edges”.

This verdict appears to be shared by the British public. A recent survey reported that[18] 52% (including 46% of Conservative supporters) thought government should increase taxes and spend more on health, education and social benefits. And polls[19] confirm that Truss should be wary of a very hostile response to her economic ambitions.