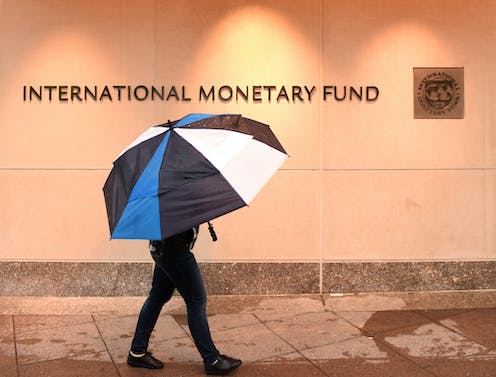 Everyone from political pundits to people on the street have issued forth on the new UK government’s tax cut-laden growth plan recently. But it was a rare public rebuke[1] from the International Monetary Fund (IMF) that really impacted financial markets.

Days after the government made its mini-budget announcement, the IMF warned[2] that “large and untargeted fiscal packages” could work at “cross purposes” to monetary policy, referring to current efforts by central banks around the world to fight rampant inflation[3]. It also suggested the government should reevaluate its tax measures and provide more targeted energy crisis support at its next budget, currently scheduled for November 23.

Investors responded[4] by beating an even hastier exit from government bond markets and sending the pound plummeting. Within hours of the IMF statement, the Bank of England had announced a plan[5] to try to calm the markets.

The IMF’s decision to comment on UK tax policy was significant and clearly had an impact on traders and investors. And while the uninitiated may be blissfully unaware of the IMF’s existence, it has played a key role in supporting economies in trouble since the middle of the last century.

The IMF was established in 1944 at the Bretton Woods Conference, which sought to stabilise global finances after the second world war. Based in Washington D.C., it is an international organisation with 190 member states[6] – from Afghanistan to the UK and US, right through to Zimbabwe.

Its mandate is to uphold international financial stability, which it tries to do by monitoring global macroeconomic developments and providing governments with advice and training[7] on economic policy management.

Most importantly, perhaps, the IMF frequently acts as a “lender of last resort” for its members. This means it provides countries in dire financial straits with much-needed money in the form of loans.

In return, these countries must agree to certain austerity measures. Depending on the situation, this can include tax[8] hikes and drastic spending cuts[9], alongside other substantial economic reforms[10].

In the last few years, governments in Ecuador[11] and Pakistan[12], among others, have hiked interest rates, cut back on public spending programmes, and reduced subsidies on household essentials such as fuel and food to meet the IMF’s performance criteria. As a result, the IMF has become one of the world’s most controversial[13] organisations.

Since the performance criteria it uses are based on the IMF’s worldview, the question of whether its advice is adequate, proportionate, and effective is often subject to debate.

For IMF advocates[14], the sometimes draconian measures it mandates are necessary to restore investor confidence, boost economic growth and help countries become more competitive in the long run. As such, the IMF can work like a seal of approval[15] for a country’s policy plans, helping governments to shore up international confidence in their economies.

To its critics, the IMF has used its policy leverage to advance reforms that have increased poverty[16] and inequality[17], leaving countries with deep social and political scars for years after accepting its help. For example, during the Ebola crisis in 2014-15, the IMF was criticised[18] for contributing to underfunded health systems that prevented effective government responses to the epidemic.

Regardless, as the recent case of the UK shows, an IMF verdict on government policy proposals can significantly affect[19] financial markets. For countries with immediate financing needs – typically developing economies – restoring investor confidence with an IMF intervention can be critical[20] to the successful resolution of financial crises.

But the IMF has also used its “magic shield” to rescue UK governments from global financial woes in the past. In fact, since the Fund’s creation, the UK has called upon the IMF 11 times.

Its last IMF rescue[21] happened in 1976 when stagflation and political stalemate forced the UK government to ask for a loan to halt speculative pressures on the British pound. The IMF provided not only financial relief, but also stability to a newly elected British administration by helping to calm market nerves about the UK economy.

Labour prime minister Jim Callaghan was forced to ask the IMF for a loan to support the UK economy in 1976. Sally and Richard Greenhill / Alamy Stock Photo[22]

This time, the IMF offered up its thoughts on the current economic situation in Britain, rather than being invited to intervene. But instead of curbing speculation about the UK’s financial viability, the statement had the opposite effect: markets panicked.

Mortgage lenders continued to pull their offerings[23] and investors kept unloading government bonds[24], forcing up yields and the cost of government borrowing. Add the plummeting British pound[25] in the mix and the current situation is in danger of becoming a textbook financial crisis.

But the IMF’s assessment is in line with international experts[26] and ratings agencies[27] in doubting that tax cuts will help reignite UK economic growth. Instead, it argues that the cuts will further expand the budget deficit.

Without a sound fiscal plan, this will increase the need for new government debt. At a time of rampant inflation, deteriorating global economic conditions and rising interest rates – which affect the cost of financing for the government – such debts may become unsustainable for the UK.

Taking into account the reaction of market participants to the IMF’s statement, and that the Bank of England felt the need to intervene in the bond market afterwards, the IMF assessment seems to have carried weight.

Certainly, the UK in debt distress is the last thing the world needs. Many governments in developing and emerging markets are struggling[28] to keep their own economies afloat right now while awaiting financial relief from western banks and the IMF.