Three years after legal experts laid out their reasons why robodebt was wrong in law and wrong in maths, the government has folded its tent, conceding all points just before trial of the test case conducted in the name of 33 year old local government employee Deanne Amato[1].

Deanna Amato found out about her alleged robodebt in January when her full tax return was intercepted and taken from her, all $1709.87 of it. Centrelink said she owed a debt of $2,754 for Austudy support it said she was overpaid while studying in 2012.

It had sent letters to her old address.

All past debts would be “methodically” reviewed, starting with those where people had not previously made contact.

Why the government caved 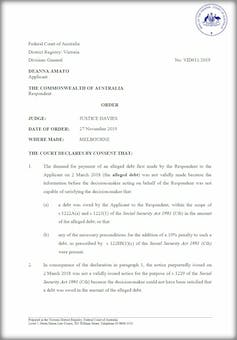 Wednesday's court order[3] Wednesday’s court order[4] makes clear why the government folded. It confirms that averages provide no evidence at all, and that Centrelink cannot “reverse the onus of proof” to require people to prove they do not have a debt. It must itself establish that there is a debt. There are no acceptable half measures on either point, so this should mean that robodebt has ended and all 300,000 or so alleged debts collected on this basis should be refunded with interest, and perhaps also an apology for distress caused by acting unlawfully. With as much as A$660 million of ill-gotten (if not all yet collected) revenue is at stake, there are indications that government is yet properly to understand what the law requires of it. It is talking as if it hasn’t understood Instead of accepting that Wednesday’s court ruling requires that any future or past debt be based on earnings in each and every fortnight, the minister, Stuart Robert, speaks only of needing “additional proof points[5]”, of there being “no change[6]” to the construct of the onus of proof and of this being just another “refinement[7]” which affects a “small cohort”. He has even talked about “continuing to use income averaging as part of a range of options to ask a welfare recipient to engage with the department of human services if there is a discrepancy”. Read more: Robo-debt class action could deliver justice for tens of thousands of Australians instead of mere hundreds[8] The initial script issued to Centrelink call centre staff when fielding calls from people enquiring about past debts in light of the changes brought about by the Federal court test case are also worryingly similar to “business as usual”. They simply invite people to collect payslips and other documents to “prepare for a reassessment[9],” leaving the very clear impression that is is still up to the person to disprove the debt. It acted without outside advice It appears from press reports that the attorney general has confirmed that for over three years the government failed to obtain other than in-house legal advice[10] before belatedly obtaining the external advice that revealed that robodebt was the proverbial Emperor without (legal) clothes. It is to be hoped that it gets it now as it works out what is required to bring debt recovery into compliance with the law. There is an old legal saying that the lawyer who advises and represents themselves “has a fool for a client”. Unfortunately on this occasion robodebt has not only made the government look foolish – the kind of failures of program design, basic mathematical reasoning and legal research that would leave a failed third world state feeling embarrassed – but in the course of its life has imposed untold hardship on and trauma on some hundreds of thousands of the most vulnerable members of Australia’s community. Read more: Danger! Election 2016 delivered us Robodebt. Promises can have consequences[11] Less than six weeks ago the UN Special Rapporteur on Extreme Poverty and Human Rights (the expat Australian Philip Alston), in a report to the UN General Assembly, warned of the risk of a “digital welfare dystopia[12],” citing robodebt as one of the leading examples of how much human and reputational damage can be caused by bad design. The Amato ruling exposes the flagrant breach of the rule of law at the heart of the welfare dystopia that robodebt created. Government must as a matter of urgency establish an open and fully representative oversight body to ensure justice is fully and quickly delivered to its past victims and that no future debts are asserted other than in proper compliance with Centrelink’s legal obligations, now so clearly laid out for all to see.