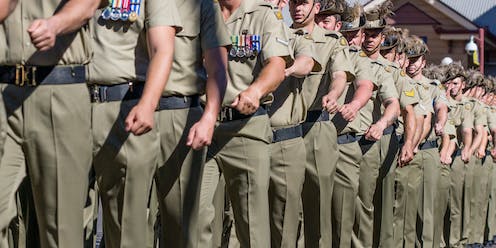 Since the beginning of the Afghanistan War in 2001, 41 Australian military personnel have been killed in combat, while more than 600 veterans[1] have killed themselves.

This week the House of Representatives affirmed a resolution from the Senate calling on the Morrison government to establish a royal commission into the suicide rate among both current and former military personnel.

Calling a royal commission would certainly signal this is an issue of national concern, but whether it can achieve what previous inquiries have not is a real question.

Veteran suicides (and associated mental health issues) have been investigated by the Australian Defence Force[2], Department of Defence and Department of Veteran Affairs, as well as a Senate select committee[3], the Productivity Commission[4] and the Australian Institute of Health and Welfare[5]. Yet the suicide rate among veterans appears to be rising.

The complexity of the problem is hinted at by the big difference between rates for those serving and veterans. As the resolution passed by parliament notes, the rate among serving military is less than half that of the general population, while among veterans it is now nearly double.

There are obvious causes, such as the trauma of past battlefield experiences. But there are more nuanced drivers, to do with the very nature of military life, a culture developed over hundreds (indeed thousands) of years to create effective fighting forces, and the difficulties many experience in leaving this life.

Read more: One veteran on average dies by suicide every 2 weeks. This is what a royal commission needs to look at[6]

The challenge of transitioning from military to civilian life is highlighted by our research involving interviews with 31 men and women who had recently left military service.

They came from all three services (navy, army, air force). Twenty-five were men, six women. Their ages ranged from 25 to 56, with their length of service ranging from five to 37 years (16 years was the average).

Mental health was not our focus. In fact, we chose subjects without significant physical or psychological impairment due to their service. But almost every one told us about the culture shock of leaving military life, finding a new job and working in the civilian world.

They spoke of feeling anxious and frustrated; of not understanding others’ motives and behaviours, and of feeling misunderstood; of struggling to translate their military service to civilian jobs; of being cut off from their previous support networks; and of feeling, at times, very alone.

If this is the experience even of healthy, well-adjusted veterans, it seems hardly surprising those with mental health issues could be pushed to breaking point.

It’s not just another job

For those not personally connected to the military or a veteran, it can be easy to underestimate just how different military life is, and much of a culture shock leaving that life can be. It’s not just like changing jobs.

Most join the military straight out of school. They enter a highly regimented world where almost every aspect of their life is tightly controlled. Their training is designed to encourage thinking and acting alike. It emphasises values such as loyalty, courage, commitment to the collective good, and discipline. Military effectiveness relies on these attributes.

As the suicide statistics suggest, those who make it through basic training can adapt well to the life. The challenge comes when it is time to leave this culture behind.

One of our subjects likened it to “peeling an onion”. It starts with losing the uniform and expectations of presentation. But it eventually requires changing some deeply held beliefs, values and behaviours that may not fit in civilian life. They work at a rapid pace, focus on a clear and shared mission, don’t stop till the job is done and always put the team first. These are not necessarily things they find in a civilian workplace.

Making this change is more complex and stressful than most imagine. In the words of one veteran, who served in the navy for five years:

“I’ve had to learn how to wind back, because warship mentality does not work in a civilian workplace.”

Many mentioned a sense of a loss of identity – military work wasn’t what they did, it was who they were. As another who served in the navy for 26 years, explained:

“All your friends are in uniform […] Something’s lost. It’s like you’re not in the club.”

Even participants who found jobs in organisations with explicit programs to support veterans still reported feeling stress and unease as they adapted to civilian work.

Five veterans we spoke to mentioned, unprompted, that they knew veterans who had killed themselves and understood how those individuals had reached that point.

So if the struggle is real for those in our study who had made it into employment, imagine what it is like for those who struggle to find work or those have been diagnosed with a mental illness trying to cope with integration into a world that is foreign to them and who are unlikely to easily find a new path into employment.

We are not advocating for any particular mechanism to inquire into veteran suicide. But we are adamant there must be an increased focus on the struggle veterans face when transitioning to a civilian world.