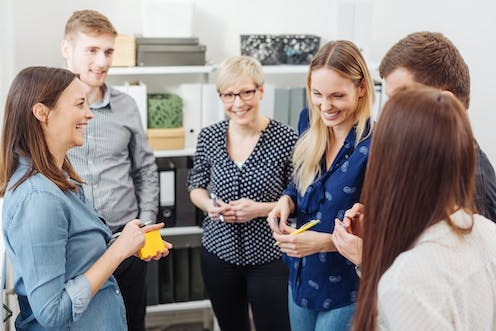 Is it enough to throw a group of people together, give them a name badge and hope for the best? Research suggests it isn’t.

Strong networks provide a range of benefits[3] including learning, sources of information, salary growth[4], innovation and a means of getting things done. Research[5] shows that people with diverse contacts are able to access information that helps them generate better ideas.

Building professional relationships improves[6] both quality of work and job satisfaction. As the landscape of work changes rapidly, employees are making more frequent career moves, which means that networking is a critical competency[7].

Despite intending to meet new people in networking settings, we often don’t act on these plans. A study[8] of MBA students at a specially organised networking event found that while 95% of attendees wanted to meet new contacts, they spent over half of the time with people they already knew.

For many, the prospect of networking is as appealing as public speaking or a trip to the dentist. In fact, research[9] has shown that networking for the purpose of advancing our professional goals can make us actually feel dirty.

And trying to make new connections isn’t easy. Studies[10] have shown that we tend to gravitate to people we already know, see often, or who are similar to us. This can be challenging for people trying to create new networks. It also explains why some employees feel isolated when trying to join established networks.

A recent study[11] demonstrated that traditional networking in science, technology, engineering and mathematics fields can be gendered. Women make 42% fewer contacts, spend 48% less time talking to them and make 25% fewer LinkedIn connections than their male counterparts.

So what can be done to increase the value and success of networking? The benefits of networking are influenced by the dynamics and nature[12] of the network.

Emerging research[13] is highlighting the interaction of the role of trust, the place and space where these events occur, and the role of hosts, to increase the effectiveness of networking. Previous studies[14] show physical proximity to others is important in building new relationships. Employees are often encouraged to relocate to regional economic clusters (Silicon Valley, for example), join incubators and coworking spaces, and find ways to be close to other entrepreneurs, investors and customers.

But for people to form new connections, research[15] indicates that social, not just physical barriers, need to be reduced.

One of the solutions to this are structured events to reduce these barriers and decrease search efforts to find new networks and opportunities. A recent example of this was a chartered flight[16] from Silicon Valley to the Myriad entrepreneurship festival in Brisbane. The idea of the mid-air networking flight was to create opportunities for established entrepreneurs, investors and business leaders to network with emerging entrepreneurs, students and business people.

But for networking to succeed it needs to be more than one-off events. Studies[17] show that individuals who receive organised introductions make a far greater number of new contacts, and make far stronger connections with these contacts, than those who received no introduction.

These findings emphasise the importance of creating opportunities for both employees and entrepreneurs to connect, beyond just bringing them together in a particular setting or event. In my research[18], I found that the role of a host in business incubators and coworking spaces was critical in helping to identify and create opportunities to form new and diverse networks.

The hosts of these spaces appear to play a pivotal role in a network. They identify not only those who should connect, but also ensure they are at the right stage to take advantage of the introduction. The host is also able to connect people to the right information and resources.

The success of this role appears to rest heavily on the trust embedded in these established networks. The person who is being asked to connect is more open to the meeting, knowing that the host will have determined that the meeting will be worthwhile for both parties.

Entrepreneurs rely on social ties in building new ventures, and employees rely on effective workplace networks to be innovative and perform better. These new studies show that if the physical setting as well as clear strategies to facilitate new connections and networks are right, then networking wouldn’t be such a pain.