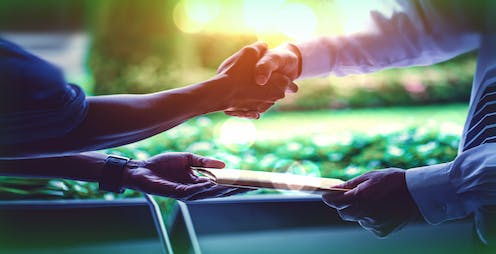 As JobKeeper is wound back[1], businesses are tentatively preparing to stand on their own feet.

What follows is a simple proposal to help them share the risk (and rewards) with their workers.

It has features in common with the government’s Higher Education Contributions Scheme[2] (HECS) in which university students get help with fees in return for making their own contribution when (and if) circumstances allow.

Recently a variant has been suggested for farms, whose income is notoriously variable and unsuited to conventional loans with regular repayment schedules.

What’s proposed is an arrangement contingent on business revenue[3] rather than personal income as with HECS.

Farm businesses would borrow from the government or banks and make repayments when conditions permitted. It would cost taxpayers much less than subsidies or grants.

Employers could ‘borrow’ from workers

We are proposing the same sort of arrangement between employers and employees.

Universities, for example, might consider revenue-contingent salary reductions as an alternative to redundancies.

All staff or staff at risk of being made redundant might be offered a 10% salary reduction that would be refunded by the university when (and only if) its revenue bounced back by a agreed amount in the future.

Read more: Bowing out gracefully: how they'll wind down JobKeeper[4]

If the university’s fortunes did bounce back, the staff affected would be repaid the income they lost.

It ought to work in all sorts of enterprises.

For many, jobs matter more than income

Wellbeing and life satisfaction are often more dependent on job security than they are on salary, suggesting that many people would be willing to trade-off one for the other.

Introduced through enterprise bargaining and policed by Fair Work Australia, such an arrangement might well be a win-win for workers and the enterprises they work in.

It ought to be added to the menu of possibilities[5] being considered to support businesses and workers when JobKeeper ends on March 28[6].