As a second COVID-19 lockdown looms in New South Wales, there is much discussion about the economic costs of doing so.

It should come as no surprise that having a highly contagious virus with a significant fatality rate running through the community is bad for the economy.

People are afraid to congregate in public or catch public transport or taxis. People don’t want to spend much money when they have debts to pay and their job might be at risk.

This leads to what I have called a “self-lockdown”. No matter what the government mandates, people cut back on economic activity.

Of course, government-coordinated lockdowns entail an extra short-term cost to the economy. Closing pubs and restaurants means those businesses, for a time, have zero revenue.

Read more: Vital Signs: The evidence that lockdowns work may not be gold standard, but it's good[1]

But how much of the reduction in economic activity is due to the virus, and how much to government lockdowns?

It is crucial to understand this. Because it is the incremental cost of the lockdowns that represents the investment we make in the economy of the future by getting the virus under control. If we think the cost of lockdowns is higher than it really is, we won’t enact them in cases where on balance we should.

Evidence from the United States

The best evidence to date on this matter comes from a remarkable paper[2] circulated in June by University of Chicago economists Austan Goolsbee and Chad Syverson.

To analyse the causal effect of government policy on the US economy during the initial spread of COVID-19, they used mobile phone data to measure foot traffic at 2.25 million individual businesses across 110 industries in the US.

To estimate what proportion of lower foot traffic was due to self-lockdown rather than government-imposed lockdown, they looked at differences between businesses with customer “commuting zones[3]” spanning state or county jurisdictions with different legal restrictions. As they put it:

This leverages two related types of variation: businesses in border-spanning commuting zones where jurisdictions impose shelter-in-place orders at different times (e.g., northern Illinois when Illinois placed a sheltering order on March 20th while Wisconsin waited until the following week), and businesses in commuting zones where a jurisdiction never imposed an order (e.g., the Quad Cities area, where the Illinois towns of Moline and Rock Island faced stay-at-home orders but bordering Davenport and Bettendorf, Iowa, did not). 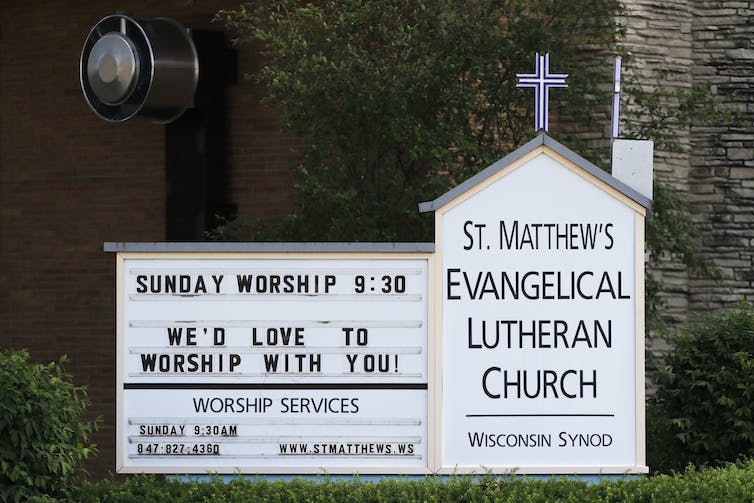 St Matthew’s Lutheran Church in Niles, Illinois, invites worshippers back on June 25 2020 as gatherings of up to 50 people are allowed under the state’s reopening plan. Nam Y. Huh/AP

Goolsbee and Syverson found total consumer traffic fell by 60 percentage points, but legal restrictions accounted for just 7 percentage points of this. That is, it caused less than 12% of the total effect.

In fact, foot traffic “started dropping before the legal orders were in place; was highly influenced by the number of COVID deaths reported in the county; and showed a clear shift by consumers away from busier, more crowded stores toward smaller, less busy stores in the same industry”.

Strikingly, US states that decided to repeal shutdown orders witnessed recoveries of a similar, symmetric size. This is further evidence of the modest incremental impact of lockdowns relative to the larger impact of the virus itself.

We need to stop thinking about lockdowns as representing the total economic hit we take from COVID-19. The virus itself is hugely damaging. Lockdowns add to that, but come with an important benefit – getting the virus under control.

Early in the pandemic, the Australian Treasury estimated Australia’s GDP would fall 10-12% in the June quarter.

Since Treasurer Josh Frydenberg cited this estimate in his National Press Club address[4] on May 5, many have used it to calculate the the cost of a national lockdown at A$4 billion a week.

But is this really the cost of the lockdown? How much of the estimated 10% drop in GDP for the June quarter is due to the virus and self-lockdown, not government lockdowns?

Read more: The costs of the shutdown are overestimated -- they're outweighed by its $1 trillion benefit[5]

If the Goolsbee-Syverson numbers translate to Australia, then the lockdown cost is closer to A$450 million a week.

That’s still a lot, but a six-week nationwide investment of $2.7 billion to get the virus under control and boost consumer and business confidence was money well spent. 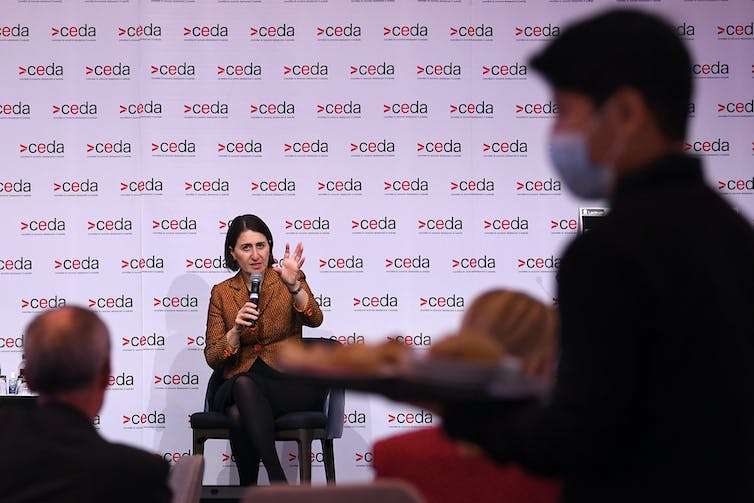 NSW Premier Gladys Berejiklian has said she doesn’t want to enact a second lockdown because of the hit to economy.

If the current outbreak can be dealt with through rapid contract tracing, testing and isolation, this may be wise.

But if the number of daily cases gets beyond a manageable point, a lockdown might be the only way to stop the spread of the virus.

The best evidence to date shows we cannot have a well-functioning economy with COVID-19 running rampant. That leads to a very costly self-lockdown, regardless of what the government does.