This week the leaders of India and Australia reaffirmed their mutual interest in closer diplomatic and economic ties.

India is committed to expanding its relations with Australia on a wider and faster pace. This is important not only for our two countries, but also for the Indo-Pacific region and the world.

But I will not say that I am satisfied with this pace. When a leader like you is leading our friend country, then the criteria for the pace of development in our relations should also be ambitious.

Australia should be ambitious for its friendship with India. We have a long-term interest in India developing as another prosperous, harmonious democracy.

Standing in the way of that is India’s chaotic web of labour laws. There are hundreds at both national and state levels. They’ve long been a disincentive to trade and investment because of the compliance challenges for law-abiding foreign businesses.

Yet those same laws are so loosely enforced domestically that dodgy and unlawful working conditions are rife.

Indeed of India’s workforce of 500 million, it is estimated about 450 million[2] are in the “informal sector”, with no minimum pay rates, let alone other benefits.

So there are good reasons for Australia to support India reducing its sheer number of labour laws. But there are also good reasons to encourage it to enforce the commitments required of both nations under international labour conventions.

In the shadows of the agenda to accelerate trade and investment is the risk of pushing more Indian workers into slave conditions.

In truth, no one knows the exact size[3] of India’s informal sector. Statistics are unreliable for work defined as “disorganised”.

As in other countries, India’s COVID-19 response has hit these workers in lowly paid, insecure manual labour hardest. This was amplified by the severity and swiftness of measures.

Modi’s March 24 orders for “a complete lockdown[4]” were issued at 8:58pm, and took effect at midnight.

Shops, markets, factories and construction sites were shut down. All public transport services were stopped. India’s population of more than 1.3 billion people was told to stay home. 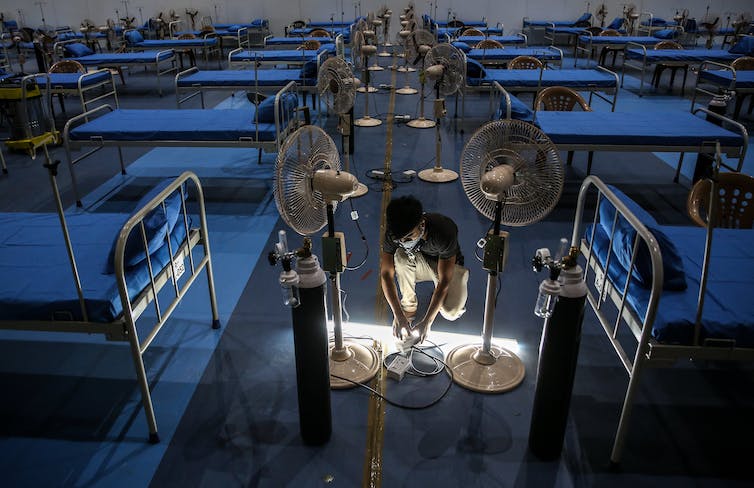 But hundred of thousands had to get home first.

India has an estimated 139 million[5] internal “migrant workers”. They come from poor regions all across India to find work in the wealthiest cities[6] such as Mumbai, Delhi and Surat. Typical jobs are in building and manufacturing, where the average daily pay rate is about US$4.60[7].

With no work, no money, in fear of having no food and of catching the coronavirus, migrant workers have for weeks queued at train and bus stations for restricted services to get home. 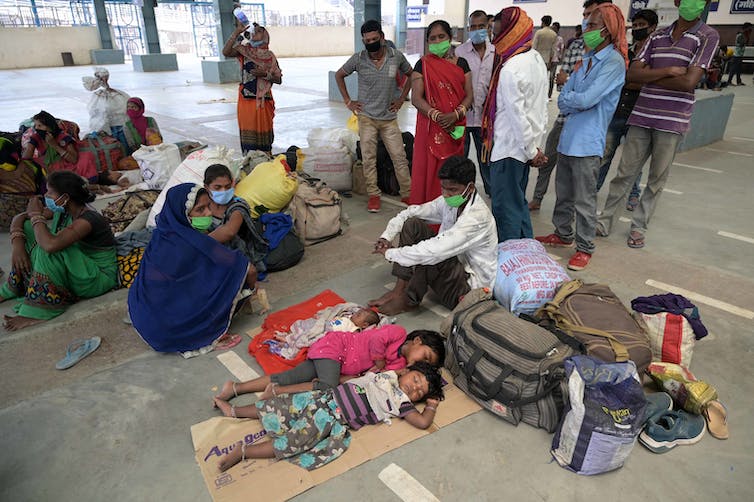 ‘Migrants’ wait to board buses at Prayagraj Junction in Allahabad, a city of about 1.1 milion in the northern Indian state of Uttar Pradesh, on May 29 2020. They are going home to their native villages. They have come from Surat, about 1,000 km to the southwest, on a train journey taking about 23 hours. Prabhat Kumar Verma/Pacific Press/Sipa USA

A survey of about 3,200 of these walkers in early April found nearly a third were in debt, usually to money lenders from their communities.

Bhagwan Das, who walked for three days to get back to his village after losing his job as a construction worker in Delhi, told his story to the Thomson Reuters Foundation[9]

Unable to maintain repayments on the 60,000 rupee (US$787) loan he took out in 2017 for his daughter’s wedding, Das had no choice but to offer his son’s labour to service the rising debt.

The Global Slavery Index 2018 estimates about 8 million[10] Indians are in some form of modern slavery – in situations were they are forced to work under threat; are owned or controlled by another; are dehumanised or treated as a commodity; and are not free to leave.

Globally there is an estimated 40 million[11] modern slaves. About 25 million are in forced labour. This may be through use or threats of violence, physical or emotional restraints, or bonded labour – also known as debt bondage, forcing people to work to pay off a debt.

Debt bondage is the most prevalent[13] form of forced labour. In India, a 2016 investigation[14] in the southern state of Tamil Nadu (India’s largest producer of cotton yarn) found 351 of 743 spinning mills used so-called “Sumangali” schemes to lure young women with the promise of lump sums for use as a dowry.

In practice this lump sum is made up of withheld wages, and used as a means to bind workers to the mill. Girls only receive the lump sum if they fulfil their three to five years contract period, under exploitative and unhealthy conditions. Girls who fail to do so, and many do because of health problems, abuse and exhaustion, most often do not receive the withheld wages.

This despite bonded labour being outlawed since 1976, and dowries since 1961.

So clearly law enforcement in India needs work. As things stand, however, the push is on to do even less. Half a dozen of India’s 28 states have already signalled their desire to suspend labour laws[15].

The northern state of Uttar Pradesh, for example, summarily suspended most laws including its minimum wage act. It reportedly plans to maintain most suspensions for three years[16]. 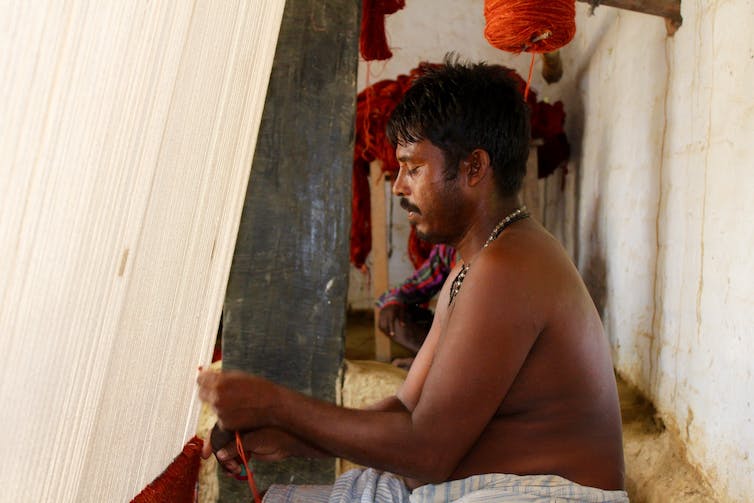 An image from the Walk Free Foundation on April 30 2020, of a carpet weaver in Varanasi, Uttar Pradesh. His community wove carpets and kept livestock for their landlord without pay before intervention by Freedom Fund local partners. AAP Image/Supplied by Minderoo, Grace Forrest)

As Radhicka Kapoor, of the Indian Council for Research on International Economic Relations, has put it, these policies are “creating an enabling environment for exploitation”.

Both India and Australia are signatories to the International Labour Organsiation’s Declaration on the Fundamental Principles and Rights at Work, which states[19] “these rights are universal” and apply “to all people in all states - regardless of the level of economic development”.

Ensuring they apply to all of Australia’s supply chains is crucial for the Morrison government to continue to be “a world leader in eradicating modern slavery” – as Home Affairs Minister Jason Woods declared just three days before[20] the Modi-Morrison meeting.