Scrutiny of the national security implications of infrastructure has been upgraded[3]. The new Critical Infrastructure Centre[4] is assisting the Foreign Investment Review Board in this. Though not made explicit, the main focus is China.

Read more: Explainer: why Chinese telecoms participating in Australia's 5G network could be a problem[5]

Greater scrutiny of investment projects is welcome, especially if community and environmental concerns are also considered. However, Australia could benefit from the availability of Chinese infrastructure financing.

Australia’s north has significant infrastructure needs[6]. And in the major Australian cities, public transport systems are inadequate[7], leading to ever-longer commuting times[8]. China also possesses world-class expertise in high-speed rail[9], which could be harnessed to better connect cities on the eastern seaboard.

Given the state of relations with China[10] and Australia’s pressing infrastructure needs, the Australian government must develop a clear strategy for Chinese infrastructure investment. Instead of passively scrutinising bids, the government should proactively identify worthwhile projects and engage Chinese counterparts to finance and implement them.

Read more: Australia risks missing out on China's One Belt One Road[11] 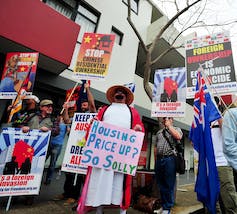 Rejecting Chinese investment outright carries huge costs for Australia, which should instead be highly selective in identifying projects that clearly benefit the country. Sam Mooy/AAP

A proactive approach could benefit Australia because Chinese infrastructure investment is not as strategically directed as many assume. This is clear if we examine the Belt and Road Initiative[12] (BRI) – the centrepiece of China’s global infrastructure financing spree.

The Australian government, on security officials’ advice, has not joined the BRI. However, Belt and Road is not a carefully planned “grand strategy”[13]. It is largely driven by the diverse activities of state-owned enterprises competing for projects and financing.

President Xi Jinping has undoubtedly used the BRI to signal China’s rise to “great power” status. But its main drivers are domestic and commercial. At its core, the BRI is an effort to alleviate China’s industrial overcapacity problem[14] in key sectors, such as steel, glass, cement and aluminium.

Read more: As its economy changes, China is starting to export its real estate ideas too[16]

Early statements suggested a BRI focus on Central and Southeast Asia. But since 2015 the initiative has been formally opened to all countries[18]. This was again due to intense lobbying from provinces, SOEs and some foreign governments. All are keen to get some of the action, suggesting little strategic direction.

The vague and loose Belt and Road plan has enabled considerable scope for interests within the Chinese party-state to use it for their own, economically motivated, agendas, with little consideration for Beijing’s wider diplomatic objectives. This has generated a rather chaotic, “bottom-up” process for selecting and funding projects.

Belt and Road project ideas usually emerge from state-owned enterprises’ in-country subsidiaries. After spotting an opportunity, they try to build support in the recipient government. Occasionally, this includes bribing officials[19]. They also often seek to obtain the local Chinese embassy’s support to improve lobbying back home.

Chinese infrastructure projects are not risk-free. The potential for misuse of key infrastructure to serve Chinese strategic agendas is clearly the Australian government’s foremost concern. But there are more immediate issues too.

Chinese banks’ lending standards are well below world “best practice”. They give limited consideration to social, environmental and labour protections when awarding financing to projects.

Tough competition between Chinese companies means they have strong incentives to cut corners and promote projects that recipients do not need. The latter can be saddled with unnecessary infrastructure and potentially unsustainable debt. Furthermore, Chinese central agencies’ capacity to regulate SOEs’ offshore activities is weak, so they cannot be relied upon to manage these problems.

The fragmented nature of Chinese investments provides opportunities, however, for selective engagement that could serve the wider public interest. This should form part of a clear Australian strategy towards China based on a nuanced analysis of both the threats and opportunities of this multifaceted relationship.

Read more: Canada's disturbing lack of vision on dealing with a rising China[22]