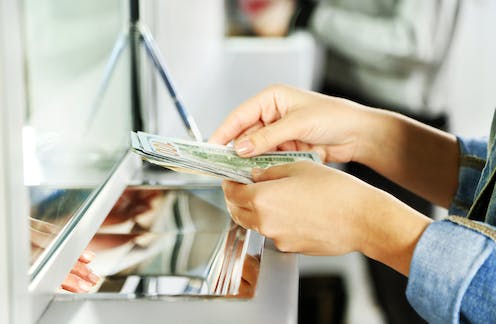 Worldwide, 143 countries have deposit insurance schemes, and New Zealand has long been an outlier. It is high time one was introduced.

Read more: 'Do no harm' isn't enough. Why the banking royal commission will ultimately achieve little[2]

According to Reserve Bank data, New Zealand households store about NZ$177.98 billion of their cash resources in banks[4]. The proposed plan is important for all New Zealanders. Most people with a bank account are retail depositors and may be unaware of the vulnerable position they could find themselves in.

Under the Reserve Bank’s controversial open bank resolution policy[5], if a bank is distressed and under statutory management, part of a retail depositor’s savings may be frozen and used to recapitalise the bank, if shareholder and subordinated creditor funds prove insufficient. Essentially, New Zealand retail depositors would have to bail out their banks, unlike retail depositors in other countries who are protected by deposit insurance up to a set limit.

Apart from protecting depositors, the insurance helps to maintain stability in the financial system. It operates primarily to stop bank runs where depositors, afraid that they will lose their money, all demand repayment at once. Images of people lining up outside banks and at ATM machines all trying to get their money out were a feature of the 2007-2008 Global Financial Crisis (GFC[6]). If people are confident that they will get their money back quickly from deposit insurance, they do not need to “run” on their banks.

Banks own the money you deposit

Depositors are vulnerable because once their money is with a bank, it no longer legally belongs to them. It belongs to the bank which can use it for its own commercial purposes. Typically, banks will lend this money to individuals and businesses (for example, through mortgages), making a profit by charging interest. In return, depositors get the right to repayment of their savings on demand.

Banks have fragile business models because they borrow short (through deposits which are repayable on demand) and lend long (through mortgages and other loans that are repayable at a fixed date in the future). Banks do not hold sufficient funds to repay all, or even most, of their depositors at once. Bank regulation provides some protection because banks are required to maintain certain levels of capital and liquidity, but if depositors panic and enough of them demand repayment, a bank can very quickly become insolvent.

Problems in one bank can pass to other banks and from banks to other types of businesses like a virus (this process is known as contagion). Eventually, this can build up to a financial crisis and lead to a recession, just as the GFC did in New Zealand and in many other countries. In a recession, almost everyone suffers, but the burden often falls most heavily on the poorest in society who have few assets to fall back on.

Retail depositors provide the bulk of bank funding in New Zealand (more than 60% of bank funding comes from households[7]) and they currently carry a degree of risk of bank failure but are not properly protected by the law.

The Reserve Bank has traditionally opposed deposit insurance because of “moral hazard[8]”. Their argument has been that protecting retail depositors from bank failure would discourage depositors from monitoring and disciplining their banks by withdrawing their savings if banks engage in overly risky activities.

This argument is based on the premise that retail depositors are capable of monitoring their banks, which requires a high level of financial literacy. The weakness in this argument was exposed during the GFC when New Zealand was forced to establish a temporary deposit guarantee scheme[9] to reassure depositors that their savings were safe. Other countries, like the UK, recognise this vulnerability and provide an appropriate level of deposit insurance.

Read more: Vital Signs. If we fall into a recession (and we might) we'll have ourselves to blame[10]

If the limit is too low, the risk is that the deposit insurance scheme will not stop bank runs and not protect financial stability and the economy. It could even cause pre-emptive bank runs. If that happened, the government would need to urgently increase the deposit insurance limit and take other extraordinary measures, but this can lead to other difficulties, including increased overall costs, which ultimately fall back on the taxpayer.

The government should be given credit for raising the issue of deposit insurance – a scheme should have been introduced years ago. But the low limit was proposed without public consultation. That is wrong.

The deposit insurance limit should not be decided solely by the Reserve Bank and Treasury. Other stakeholders have an important and valuable contribution to make. The debate should be transparent and well informed.

The second phase of the current review of the Reserve Bank Act[13] will look at how a deposit insurance scheme should be funded. It should also include public consultation on the optimal level of deposit insurance. Having finally got the issue on the table, we should not squander the opportunity to do something important for New Zealanders.