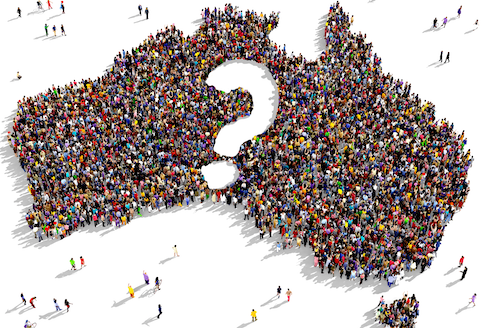 More than 25 million people Australians sat down on (or around) Tuesday August 20 last year to complete their census.

Despite our borders still largely being closed, that was an 8.6% increase in the number of people completing the census in 2021 compared to the last time we broke the internet[1] to do it (in 2016).

And the population has been steadily increasing, largely thanks to migration, over the past 25 years.

Millennials and Boomers battle it out

This census saw a generational shift in who was filling out the census.

While there has been little change in the total size of the Boomer population, the proportion of the population has dropped since 2016 – making way for their traditional generational rivals.

Millennials are now on equal footing, which could tells us something about recent (and future) elections[3], as well as potential culture wars.

More than half of Australians (51.5%) reported either being born overseas or having a parent who was.

This is the first time since the question was added to the census this has been the case, and it will be interesting to see if this number continues to increase given the impact border closures have had over the past two years.

While England remains the number one source of new Australians, India, New Zealand and China were not far behind – and growing – as the most common countries of birth.

Since 2016 there’s been a 25% increase in the number of Australians who identify as Aboriginal and/or Torres Strait Islander, with 812,728 people (or 3.2% of the population) indicating it on their census form.

Read more: Aboriginal and Torres Strait Islander population has increased, but the census lacks detail in other facets of Indigenous lives[4]

While Christians as a whole remained the number one religious group – with 43.9% of the population identify with some form of Christianity – “no religion” was the number one individual religious affiliation, with Catholic a distant second.

Read more: 'No religion' is Australia's second-largest religious group – and it's having a profound effect on our laws[6]

A population-wide look at our long-term health

For the first time, the Australian Bureau of Statistics asked Australians about long-term health conditions, which gives us a population-level view of the self-reported health of the nation.

While just under 15.3 million (60.1%) Australians reported no conditions, 2.2 million reported having some kind of long-term mental health condition (including depression or anxiety), with arthritis and asthma not far behind.

An ageing population, as well as reports of the impact of COVID and lockdowns on mental health[7] across multiple[8] populations[9], suggest it’s unlikely the number of people with a long-term health condition is going to decrease over time.

The data also show that women are more likely than men to have multiple long-term conditions.

Women are still doing (much) more housework than men

Finally, the census showed – again – that women are doing the lion’s share of unpaid domestic work[10].

Women were much more likely than men to be doing more than 30 hours of unpaid domestic work in the week prior to census night, and men were more likely to have done none at all.

Our first – and hopefully last – COVID census shows that we still have a lot of progress to make in the way labour is shared in the home.