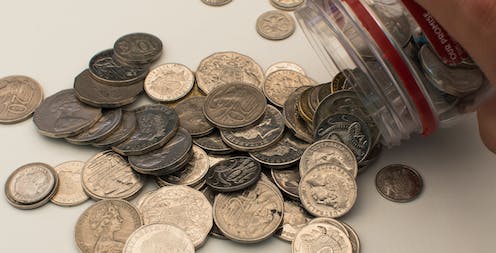 The Australian Greens have lobbed a large rock into the placid pool of economic policy by announcing a proposal for a “Liveable Income Guarantee[1]”.

The policy would increase all income support payments – for those looking for work, studying full-time or unable to work because of age, disability or caring responsibilities – to A$88 a day (about $32,000 a year) from July 2023.

This payment level is based on the poverty line calculated by the Melbourne Institute[2]. Increases to all payments would be indexed to changes to the poverty line. The policy would also scrap mutual obligation programs such as “work for the dole” and relax eligibility restrictions.

Currently welfare payments vary widely, with the age pension for a single person being about $70 a day, while JobSeeker is about $44 a day.

Source: Ben Phillips ANU, Services Australia[3] This is the first significant economic policy in the undeclared campaign for the next federal election campaign. Up to to this point it looked like there wouldn’t be much to talk about. Apart from some sweeteners carefully targeted at marginal seats and voting blocs, and small-scale initiatives like Labor’s social housing program[4], the only significant new policy from either major party likely to follow the election is the “Stage 3” tax cuts legislated under the Turnbull government. These cuts are supported by both the government and the opposition. Both major parties have also committed to “budget repair”, a euphemism for expenditure cuts, but are unlikely to provide any details until after the election. COVID-19 changed the landscape The Greens’ plan shares its name, and many of its design features, with a proposal[5] put forward in July 2020 by Tim Dunlop, Elise Klein and myself. We proposed this after the massive expansion of the JobSeeker program to deal with COVID-19 demonstrated Australia did have the resources to eliminate most sources of poverty when it was considered necessary to do so. We argued a liveable income guarantee would be an ideal way to make the achievements of JobSeeker permanent. Read more: Forget JobSeeker. In our post-COVID economy, Australia needs a 'liveable income guarantee' instead[6] The Greens’ policy differs from our 2020 proposal in two main respects. First, it is more generous, raising all benefits. The Parliamentary Budget Office has calculated this will cost about $43.7 billion in the first year, and $44.9 billion in the second. On the other hand, we proposed expanding payment eligibility to people engaged in volunteering, community projects and artistic and creative activity. The Greens’ proposal maintains the existing set of benefit categories.

People queuing outside a Centrelink office in Melbourne in March 2020. Stefan Postles/AAP How to pay for liveable welfare payments As debt and deficits have faded as a political point-scoring issue, the idea that all new spending programs need to be matched with other cuts or extra revenue has become less compelling. But resources used for one public program can’t be used for other programs, or for private expenditure. So it’s important to ask what kinds of measures could offset the call on public resources proposed in the liveable income guarantee. The option with the biggest impact would be to cancel or defer the Stage 3 tax cuts, which will cost an estimated $18-20 billion a year. That would offset nearly half the money spent on the liveable income guarantee. The Greens have also pointed to tax measures they have previously proposed, including a billionaires tax and a corporate super-profits tax. Read more: How to camouflage $150 billion in spending: call it 'tax expenditure'[7] It has always hard to estimate how much revenue such measures would collect, given the capacity of wealthy individuals and corporations to rearrange tax affairs. On the other hand, with improved global cooperation on tax, thanks mainly to initiatives from the OECD, there is more capacity to make billionaires and large corporations pay a fairer share of the costs of the society that supports them. Another source of offsets could arise from what used to be called “tax expenditures[8]” and are now referred to more obscurely as tax benchmark variations. These are tax concessions or exemptions applying to particular activities or classes of taxpayer. These total about $150 billion a year[9] according to the latest Treasury estimates. The biggest elements are concessions on capital gains tax and superannuation. A policy for serious debate The Greens proposal would greatly improve the position of millions of Australians on low incomes at the expense of reducing the disposable incomes and wealth of the well-off, with a particular impact on the very rich. Barring a complete revolution in Australian politics, there’s no chance the next election will lead to such a result, or even a serious move in that direction. It is a striking commentary that the Greens’ Liveable Income Guarantee will be rejected by a government led by Scott Morrison, a self-declared conservative, and also by Anthony Albanese, a leader from the Labor Party faction still sometimes called the “socialist left”. Read more: What happens when you free unemployed Australians from 'mutual obligations' and boost their benefits? We just found out[10] Based on current polls, the most that millions of Australians living in poverty can hope for is a Labor government in need of Green support raising benefits a little, and softening some of the most oppressive features of the current system. But the point of an election is to debate and decide on the future direction of the country. By putting forward this bold initiative, the Greens are providing us the chance to have such a debate. Other Greens proposals, like phasing out the use of coal, once seen as outside the realm of possibility, are now widely accepted. Similarly, the liveable income guarantee may make its way on to the policy agenda for the future. References^ Liveable Income Guarantee (www.aap.com.au)^ Melbourne Institute (melbourneinstitute.unimelb.edu.au)^ Source: Ben Phillips ANU, Services Australia (www.servicesaustralia.gov.au)^ social housing program (theconversation.com)^ with a proposal (theconversation.com)^ Forget JobSeeker. In our post-COVID economy, Australia needs a 'liveable income guarantee' instead (theconversation.com)^ How to camouflage $150 billion in spending: call it 'tax expenditure' (theconversation.com)^ tax expenditures (theconversation.com)^ $150 billion a year (theconversation.com)^ What happens when you free unemployed Australians from 'mutual obligations' and boost their benefits? We just found out (theconversation.com)Authors: John Quiggin, Professor, School of Economics, The University of Queensland