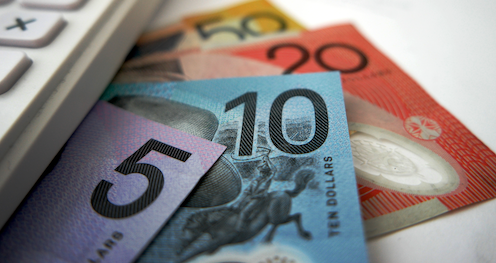 A curious feature of the Australian tax system is “bracket creep”. Taxpayers whose income climbs by no more than prices (inflation) get no increase in their living standards. Instead, they see more and more of their income pushed into their highest tax brackets, or to even higher tax brackets.

It means the government’s income from income tax keeps climbing, even if there are no more people paying it and the value of what they earn hasn’t climbed.

What each extra dollar of income is taxed at, excluding Medicare levy and offsets

Australian Tax Office[1] It means that as someone’s income climbs from, say, $80,000 to $90,000, a greater proportion of it is taxed at 32.5% and a lower proportion of it is either taxed less or untaxed. This happens even if rising prices mean what that person can buy hasn’t changed – or at the moment, with prices[2] climbing faster than wages[3], means their buying power has shrunk. Bracket creep is increased tax by stealth It’s why every few years the government trumpets a tax cut, which in reality is often no more than giving back some of the proceeds of bracket creep. It could all be ended if the thresholds at which each tax rate cut in were indexed to inflation, climbing each year in line with price increases. Read more: The budget's dirty secret is the tax hikes you're not meant to know about[4] Prime Minister Malcolm Fraser briefly introduced tax indexation in 1976[5] but abandoned it partially in 1979 and fully in 1982, finding himself not thanked for it. This week in the Australian Financial Review, economics professor Steven Hamilton made a persuasive case[6] for indexation based on “starving the beast.” As he put it, indexing brackets to inflation at this year’s budget may be the Liberals’ last chance this decade to put some brakes on the relentless creep of the state and the sapping of hard work and entrepreneurship, having spent a decade enabling it This argument has a degree of truth to it, for sure. An ever-expanding government is bound to become lazier and spend money less efficiently than a government that is income constrained. And it certainly doesn’t suggest that there is no role for government, as is suggested by US anti-tax campaigners such Grover Norquist[7]: I don’t want to abolish government. I simply want to reduce it to the size where I can drag it into the bathroom and drown it in the bathtub But there is also a progressive case for indexation. The progressive case for indexation If governments had go to voters and ask for a tax increase to fund additional spending (for any given budget surplus or deficit) then the link between tax and spending decisions would become clear. If voters wanted more services, such as better hospitals or a better national disability insurance scheme, they would have to vote for higher taxes. Bracket creep means the link is effectively hidden from them, as it shrouds the funding of spending. Read more: A simpler tax system should spark joy. Sadly, this one doesn’t[8] It sounds like a subtle shift, but it would be a significant one. Instead of the debate being about “we can get what we want without increasing taxes”, it would become “tax is worthwhile because unless we increase it we won’t get what we want”. Progressives ought to support the shift. The bottom line is that whatever your politics, there’s a strong case for indexing tax thresholds to inflation. It would make our tax and our political system more honest, ensuring politicians actually acted in our interests. References^ Australian Tax Office (www.ato.gov.au)^ prices (www.abs.gov.au)^ wages (www.abs.gov.au)^ The budget's dirty secret is the tax hikes you're not meant to know about (theconversation.com)^ 1976 (taxpolicy.crawford.anu.edu.au)^ persuasive case (www.afr.com)^ Grover Norquist (diehealthy.org)^ A simpler tax system should spark joy. Sadly, this one doesn’t (theconversation.com)Authors: Richard Holden, Professor of Economics, UNSW Sydney