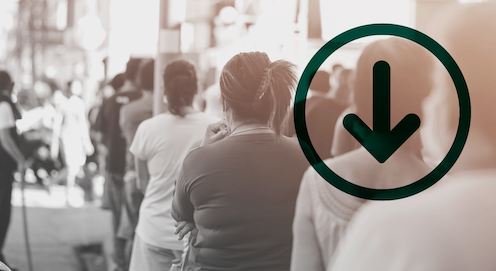 If you told someone a year ago unemployment was about to dive below 5%, to just above 4%, they wouldn’t have believed you.

If that person was an expert, and you said it would happen despite a Delta outbreak and lockdowns in our two biggest states, they might have said you had little idea of how the economy worked.

At the beginning of last year, The Conversation[1] asked 21 of Australia’s leading economists what would happen in 2021 and 2022. At the time, the published unemployment rate was 6.6%.

Asked when the unemployment rate might eventually even touch 5%, none nominated 2021. Only two nominated 2022. The rest picked dates years into the future. Three picked “not for the foreseeable future”.

And yet many experts – many of whom use the models that failed to foresee how quickly unemployment would fall – are now using the same models to warn against doing too much to push it down further.

They are worried about absurdly high inflation along the lines of the 7.5%[3] now being experienced in the United States and the danger that authorities will push up interest rates too late and too hard to crush it, bringing on a recession.

In their sights are the Reserve Bank’s ultra-low cash rate and the government’s A$7 billion per year tax offset[4], introduced in 2018 to provide tax relief ahead of the more comprehensive tax cuts now in effect, then extended twice to support the economy during COVID.

Removing them – removing the economic support set to push it down to where it hasn’t been in half a century[5] – is said to be essential in order to bring down government debt and avoid disastrous inflation.

He told a parliamentary committee that while this was an option “conceptually”, a better idea would be to use government spending to grow national income quickly so the debt-to-income ratio shrank.

That’s the way the debt-to-income ratio has been shrunk in the past – by expanding national income through, among other things, putting more people into jobs[7].

Dr Lowe also has ideas about tightening settings to stymie inflation, which don’t accord with those of the experts who warn of a US-style takeoff in inflation if we eat further into unemployment.

The case for caution was summed up this way by economist Andrew Charlton on Radio National’s Saturday Extra[8] a few weeks back:

Running the economy is a bit like driving a car around a racetrack. You want to go as fast as you can, but you don’t want to go too fast or you will crash.

Go too fast and you’ll get rising inflation, authorities will be forced to lift interest rates quickly, and you’ll bring on a recession. Ease off on boosting employment – be less ambitious – and you won’t crash.

Dr Lowe told parliament last week that Australia was not the United States.

Australia is not the US

In Australia wage growth is no higher (at 2.2%) than it was before COVID, even though unemployment is dramatically lower. That’s because, unlike the US, Australia kept workers in their jobs through JobKeeper and measures to keep jobs safe. Employers haven’t had to offer more to get workers back.

Reserve Bank chief economist Luci Ellis.[9] The Reserve Bank’s model says inflation should be climbing much higher than it is with unemployment as low as it is. That that hasn’t happened suggests the model is wrong. On Friday[10], Reserve Bank chief economist Luci Ellis said if there was a floor under unemployment that couldn’t be breached without setting off an inflationary spiral, that floor was not “set in stone”. One of the reasons is that as people previously unemployed become employed, the floor of people employers regard as unemployable sinks. The longer the Reserve Bank and the government’s budget keeps supporting the economy, the lower the floor will sink and the fewer Australians will be kept unemployed. Dr Ellis said while her model was telling her the floor under unemployment was 5%, it was not “the right way to think about it”. The floor might be four-point something, it might be three-point something. Until we get there, we won’t know. Read more: A myth that won't die: stopping migration did not kickstart the economy[11] Given that we are in uncharted territory we owe it to ourselves to chart it. This is the Reserve Bank’s view, and it might well be the government’s view. We owe it to ourselves to see just how low unemployment can be. References^ The Conversation (theconversation.com)^ 4.157% (theconversation.com)^ 7.5% (tradingeconomics.com)^ tax offset (www.smh.com.au)^ half a century (theconversation.com)^ on Friday (parlinfo.aph.gov.au)^ putting more people into jobs (theconversation.com)^ Saturday Extra (www.abc.net.au)^ Reserve Bank chief economist Luci Ellis. (www.rba.gov.au)^ On Friday (parlinfo.aph.gov.au)^ A myth that won't die: stopping migration did not kickstart the economy (theconversation.com)Authors: Peter Martin, Visiting Fellow, Crawford School of Public Policy, Australian National University