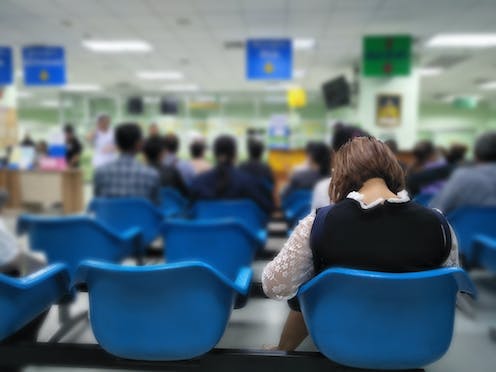 While chairing the National Mental Health Commission I pushed hard for an all-encompassing review of mental health, and I have welcomed the recent announcement that the Productivity Commission will conduct one.

But I’ve been distressed to hear commentators dismiss it as just another inquiry[1], or one conducted through a narrow economic lens.

Its strength is that it won’t be limited to a narrow health lens.

Instead it will take into account the broader impacts[2] of mental illness across the entire economy on things such as workforce participation, education, productivity, justice, housing and lost production.

It is of course true there there are health, social and moral imperatives to improve mental health.

But, sadly, those arguments are not always enough to spur governments into action.

To convince key decision-makers in departments such as Treasury and Finance, we need to present an economic case that extends beyond the health system to the broader benefits available from investing in services to keep people well and out hospital.

Earlier reports have laid the groundwork

It is also true that we have had many mental health inquiries and reports over the past decade or more.

But each has added to the other, taking us forward a step at a time toward recognising the scale of the problem and putting it on the public agenda.

We should bear in mind that it has only been relatively recently that our society has openly discussed mental health. The nature of the constitution also limits how much the federal government can do.

The Productivity Commission inquiry has the potential to be the capstone of all of those previous reports.

The scale of the challenge is enormous. The cost of mental illness to the economy is around 4% of GDP.

Nationally we spend about A$9 billion out of a total health budget of A$170 billion to treat and escape it. That’s less than 1% of GDP.

If we spent more and cut mental illness by 25%, we would be rewarded by an ongoing boost to the Australian economy of 1%, each and every year.

Four in every ten Australians aged 16 to 85 will have a common mental disorder at some point in their life; that’s around 8.6 million people.

People with mental illness typically die younger and are more likely to be unemployed and face homelessness.

Read more: People with mental illness still die a decade earlier than those without[4]

Mental and substance use disorders account for more than 12% of the burden of disease in Australia. This makes them the third-biggest cause of ill health behind cancer and cardiovascular diseases.

It clogs up emergency departments

We know that there are few places to go for people experiencing mental ill health apart from general practitioners and the emergency departments.

Read more: What causes schizophrenia? What we know, don't know and suspect[5]

The Institute of Health and Welfare reports there were a staggering 276,954 mental-health-related emergency department presentations across Australia in 2016-17.

Previous reports and inquiries have pointed out it is the lack of investment in cheaper treatment and recovery services in the community that is leading to people getting so unwell that they need to present to expensive emergency departments.

This inquiry will be the one we’ll need

The 18-month Productivity Commission inquiry is an opportunity to quantify the extent of new investment we need and benefits it could bring to the broader economy.

Read more: Three charts on: why rates of mental illness aren't going down despite higher spending[6]

Those who argue that Productivity Commission reports don’t achieve anything need to be reminded of the role of the commission in bringing about tariff reform and presenting the case for the National Disability Insurance Scheme and exposing the appalling state of the retail superannuation industry, now on display at the financial services royal commission.

The commission’s record suggests its examination will be more than just another inquiry. It’ll be the one we need.