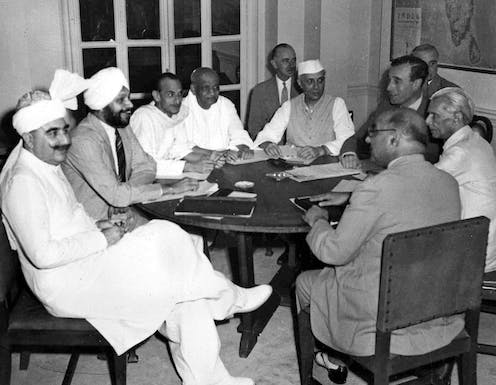 India and Pakistan inherited the same economic legacy of underinvestment and neglect[1] from Britain when they became independent states following the Partition[2] on Aug. 15, 1947. Their colonial economies were among the poorest in the world[3].

For both nations, independence almost immediately led to strong growth and fueled significant gains in education, health care and other areas of development. But it was Pakistan that saw faster growth rates[4] during the first four decades or so, while India lagged behind.

Something began to change around the 1990s as their roles reversed and India vaulted ahead of Pakistan[5], eventually becoming the world’s third-biggest economy by purchasing power[6] and the “I” in BRICS – an acronym referring to a bloc of five key emerging market[7] countries.

What accounts for India’s growth spurt?

As a scholar of international political economy[8], I believe India’s stronger embrace of democracy – at the same time that Pakistan experienced frequent military dictatorships and changes in government – has a lot to do with it.

From 1857 to 1947, Britain ruled directly[9] over most of the territory that became the independent states of India and Pakistan.

Economic growth under British rule was minimal[10], averaging just 0.9% a year from 1900 to 1947. This happened largely because the colonial Indian economy was mostly agricultural, and yet the British made little investment[11] in improving farm productivity.

Additionally, Great Britain made limited investments in the well-being of the people of India, notably by underfunding their education and health care[12]. As a result, colonial India had one of the lowest literacy rates in the world at about 17%[13], and life expectancy was in the mid-30s[14]. Britain’s neglect of the plight of Indians is perhaps best illustrated by the 1943 famine in Bengal in eastern India[15], in which over 1.5 million people died as result of policy failure.

Britain decided to give up[16] its “jewel in the crown” and partition the region into Hindu-dominated India and Muslim Pakistan after facing mounting pressure from the local population and a growing nationalist movement.

This led to one of the largest forced migrations[17] of the 20th century: Nearly 9 million Hindus and Sikhs moved into India and about 5 million Muslims to a geographically separated East and West Pakistan over the next two decades. An estimated 1 million people died amid mass violence.

Economic growth, however, took off, with both new[18] countries growing[19] at 3% to 4% in the first decade or so of independence as the respective governments invested more into their economies. But soon, differences emerged.

While both economies were largely state controlled, India’s government curtailed exports[20] and adopted a protectionist trading policy in the 1960s that limited growth.

Pakistan, on the other hand, benefited from significant trade[21] from its East Pakistan region. The newly created Pakistan was geographically separated by India – on one side of it was West and the other side East Pakistan. Each was carved out by the British due to its Muslim majority. Pakistan lost its growth engine[22] in 1971, when East Pakistan became Bangladesh following a war of independence.

Pakistan also received billions of dollars in military aid[23] from the U.S. Fellow oil-rich Muslim countries in the Middle East have also given aid to Pakistan[24]. As a result, Pakistan’s growth accelerated to about 6% a year from 1961 to 1980, compared with 4% for India.

What explains the role reversal? Economics and politics both played a part.

Pakistan has long relied on external sources of funding more than India has, receiving $73 billion in foreign aid[26] from 1960 to 2002. And even today, it frequently relies on institutions[27] such as the International Monetary Fund for crisis lending and on foreign governments like China for aid and infrastructure development.

The aid has allowed Pakistan to postpone much-needed but painful reforms[28], such as expanding the tax base and addressing energy and infrastructure problems, while the loans have saddled the country with a large debt. Such reforms, in my view, would have put Pakistan on a more sustainable growth path and encouraged more foreign investment.

While India also got a fair amount[29] of support from international aid groups and a few countries[30] such as the U.S. earlier in its existence, it never depended upon it – and has relied less on it in recent decades. In addition, in 1991, India liberalized trade[31], lowered tariffs, made it easier for domestic companies to operate and grow, and opened the door to more foreign investment.

India has become a major exporter of advanced goods such as software and vaccines in recent years. AP Photo/Rafiq Maqbool[32]

These reforms paid off[33]: By integrating India’s economy to the rest of the world, the reforms created market opportunities for Indian companies, made them more competitive, and that, in turn, led to higher growth rates for the overall economy.

Another way to measure the different paths is in gross domestic product per person. In 1990, India and Pakistan had almost identical per-capita GDPs[34], a little under $370 per person. But by 2021, India’s had surged to $2,277, about 50% higher than Pakistan’s.

The reasons for their different choices have a lot to do with politics.

Pakistan has suffered from near-constant political instability[35]. From 1988 to 1998 alone, it had seven different governments as it alternated between civilian and military governments following coups. This discouraged foreign investment[36] and made it much harder to make reforms and follow through on them. Through all these changes, Pakistan’s military spending as a share of its GDP[37] remained higher than India’s during the entire post-independence period.

India, on the other hand, has managed to maintain a steady democracy. Though it’s far from perfect, it has kept leaders more accountable to the people and led to more inclusive growth and less reliance on foreign institutions or governments. In one decade alone, India lifted over 270 million people[38] out of poverty.

At a time when democracy is under threat[39] in so many parts of the world, this history, in my view, reminds us of the value of democratic institutions.