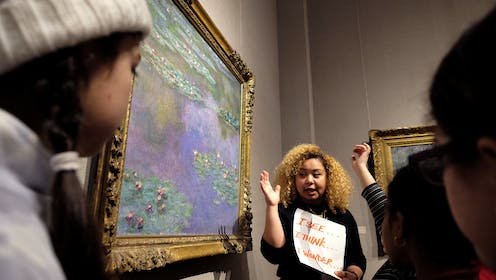 Nonprofits that spend more[1] on information technology, facilities, equipment, staff training, program development and fundraising tend to be more successful than those that scrimp on these"overhead expenses[2].“ But many donors are reluctant to support groups that spend heavily on those priorities because they associate high overhead costs with wasted money and bad management.

Because this problem is of concern to donors and charities alike, we – two scholars[3] of public administration[4] – set out to identify the point beyond which spending more on overhead stops enhancing an organization’s operations. That is, how much overhead spending is enough, and how much is too much? And since we reasoned that the point that strikes the right balance might be different for, say, a homeless shelter than an art gallery, we focused on one broad category.

We analyzed data derived from 22,328 U.S. arts and cultural nonprofits[5] – largely museums and theaters – from 2008 through 2018. We looked at what share of their budget covered overhead and how many people attended their events and exhibitions. More people going to a museum or seeing a play over those 11 years served as our proxy for success.

As we explained in the academic journal Nonprofit and Voluntary Sector Quarterly[6], we found that when arts nonprofits devoted 35% of their budget to overhead, they fared best in terms of attendance.

Our findings cast doubt on a common rule of thumb, embraced by some prominent groups[7] that monitor and evaluate charities[8], that nonprofits with lower overhead ratios[9] are better than those with higher ratios.

This research also adds to[10] a growing body of evidence[11] that spending too little on overhead[12] deprives nonprofits[13] of the competitive salaries, staff training, equipment and other resources they need for long-term success.

Nonprofit scholars have been warning for nearly two decades[14] about the dangers of pressure from donors to keep overhead spending low.

Conforming to expectations about keeping overhead expenses down can cause what’s known as the ”starvation cycle[15].“

In response, nonprofits feel pressured to meet those expectations to attract funding. They may then spend too little on overhead by paying low and noncompetitive salaries, replacing paid staff with volunteers and using outdated facilities and equipment. Alternatively, they may distort the way they report on their expenditures to satisfy their donors’ demands.

Either response can feed donors’ unrealistic assumptions, creating a cycle that slowly but steadily starves nonprofits and weakens their infrastructure.

Problems with any rule of thumb

We also found evidence supporting donors’ fears that spending too much on overhead is unwise.

But while the data analysis suggests that arts nonprofits hit the sweet spot by spending a bit more than one-third of their budget on these costs, we are not trying to recommend a new benchmark for overhead spending in the sector.

That’s because optimal overhead levels vary depending on several factors. For example, programs that charge admission may have to spend more on overhead than free programs to attract an audience.

In short, we are not recommending a new rule of thumb for all nonprofits.

They also contribute to the ongoing efforts[20] of nonprofit leaders, scholars, certain foundations[21] and some charity monitors[22] to adjust donor demands and expectations.

To aid those efforts, we encourage nonprofit leaders and funders to find more meaningful ways to assess whether a nonprofit is worthy of a donor’s dollars than calculating the share of their budget spent on overhead.