Not long ago it seemed as if the future was going to get better and better — not long ago at all.

For me the high point was around 2005, fifteen years ago.

I don’t know if you can remember how you felt at the time, but for me the surge in living standards, driven by an ever-building surge in output per working hour (“productivity”) suggested things were building on themselves: each new innovation was making use of the ones that had come before to the point where…. 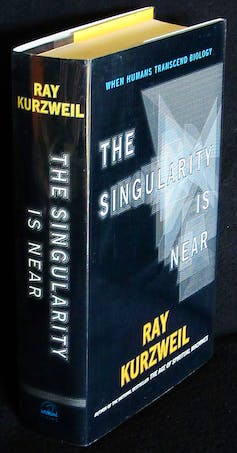 Ray Kurzweil, now the director of research at Google, summed it up in a book released in 2005 itself, titled The Singularity Is Near[1]. Singularity was “a future period during which the pace of technological change will be so rapid, its impact so deep, that human life will be irreversibly transformed”. Changes would build on each other to the point where everything changed at once. Kurzweil dubbed it the “law of accelerating returns[2]”. Year by year in the leadup to 2005, Australia’s productivity growth had accelerated to the point where in the 15 years to 2005 it had grown 37%. If it kept accelerating… In the 1930s economist John Maynard Keynes foresaw “ever larger and larger classes and groups of people from whom problems of economic necessity have been practically removed”. On average the working week might fall to 15 hours[3]. In the 1970s, futurologist Alvin Toffler spoke of a four-hour[4] working day. And then from 2005 on productivity growth collapsed. In the 15 years since, Australia’s output per working hour (productivity) has grown by just 17%. Thirty seven per cent turned out to be the high point. Long-run productivity growth, Australia 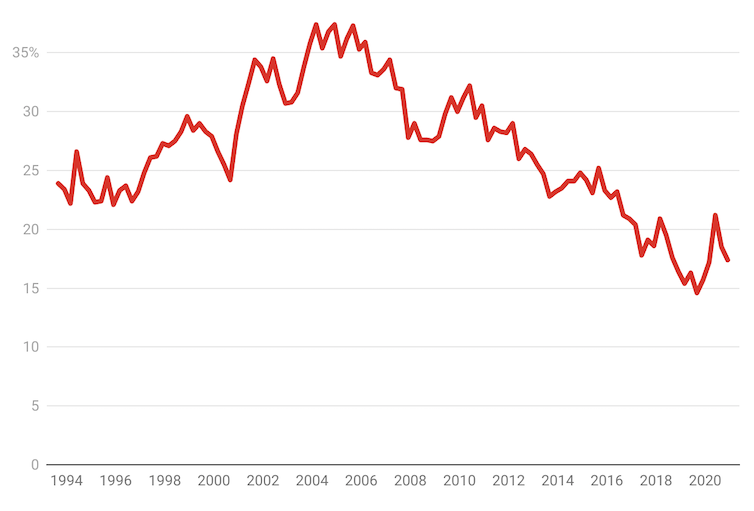 Growth in GDP per hour worked over the previous 15 years. ABS[5] And not only here. In the United States[6] and other developed economies productivity growth is divided into “before 2005” when it was rapid, and “after 2005” when it collapsed. 2005 is when Apple got serious[7] about developing the iPhone. It was when many of our technological innovations really did start building on themselves. 2005 is when things were meant to take off In his impressive book The Rise and Fall of American Growth[8] economist Robert Gordon rightly points out that things like the iPhone are nothing like as genuinely useful as the innovations in the leadup to the 1940s. Gordon says not a single urban home was wired for electricity in 1880, but by 1940 nearly 100% had mains power, 94% had clean piped water, 80% had flush toilets and 56% had refrigerators. He says whereas as all of us could quite happily travel back in time 60 years from today and enjoy a recognisable lifestyle, we couldn’t have done it if we travelled back 60 years from the 1940s. Instead, they stagnated It’s as if the innovation we’ve had has been less useful. As if, in the words of PayPal founder Peter Thiel[9], “we wanted flying cars, instead we got 140 characters”. Or it might be that the things we do these days are harder to automate. A century ago roughly half the Australian workforce worked in service jobs — doing things such as hairdressing and writing reports. Today it’s 80%[10]. Back then, 45% of us worked in farming or manufacturing. Today it’s not even 10% Services such as hairdressing, nursing and aged care are about as productive as they will ever be. It’s possible to cut hair or consult patients faster, but what’s lost is the time and personal attention spent doing it, which is part of the service. We might be reaching hard limits If productivity is output (the service) per unit of input (time spent), it doesn’t make sense to measure it where much of the output is the input. That’s one of the reasons the Bureau of Statistics provides measures of what it calls multi-factor productivity[11] for industries such as agriculture and mining, but not for “health and social assistance” which is Australia’s biggest employer. The Bureau is working on a measure for health, but it thinks it will have to use as the output changed life expectancy or surveys of patient “satisfaction[12]” with their treatment. Read more: Have we just stumbled on the biggest productivity increase of the century?[13] In the US as many as 30% of workers now work in “persuasive industries[14]” including advertising, public relations and the law. It is almost impossible to measure their output — is it success in persuading people to change their minds? For public servants and writers it is possible to measure output in terms of words produced, but deeply unhelpful. It is far from certain these workers would be more productive if they worked faster. Technology might even be sending us backwards Which is a way of saying that we might be coming up against hard limits in the amount we can squeeze out of each hour of paid work. Or perhaps not. The Singularity promises us robots that can talk to dementia patients[15] and bots that can write political news[16]. 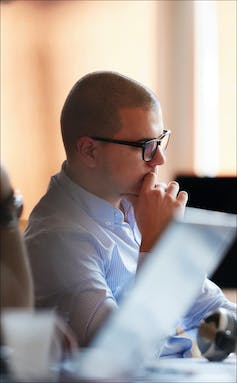 Computers are turning us into generalists. And the application of technology might even be sending productivity backwards. British economics writer Tim Harford points out that what drove the really big advances in productivity in manufacturing was specialisation. The father of capitalist economics Adam Smith famously observed that a pin factory employing 10 specialists could produce 48,000[17] pins a day. An individual who did all of those jobs working without specialised equipment could scarcely “with his utmost industry, make one pin in a day, and certainly could not make twenty”. Harford says technology is turning us into generalists[18]. “Computers have made it easier to create and circulate messages, to book travel, to design web pages,” he says. “Instead of increasing productivity, these tools tempt highly skilled, highly paid people to noodle around making bad slides.” It’ll matter for living standards I could say worse about smartphones and the 140 (now 280) characters in Twitter. They might be taking away more from our work-day output than they add to it. This failure of ever increasing amounts of technology to do anything like what was expected matters because productivity growth is what we were counting on to drive economic growth and the ability of future generations to support increasing numbers of retirees. Over four intergenerational reports[19] the government has revised down its estimates of productivity growth and the size of the economy in four decades time. The next five-yearly report is due later this year.