In August, the communications minister announced a series of changes to copyright laws[1] to “better support the needs of Australians and public institutions to access material in an increasingly digital environment”.

These changes are long overdue. But the year is ending, and we are yet to see the legislation.

The most important change is to ensure access to so-called orphan works[2].

Orphan works are copyrighted works for which the copyright owner can no longer be found.

The Australian Law Reform Commission[3] and the Productivity Commission[4] found that orphan works present a particular problem for public institutions. These include libraries, galleries, archives, museums and broadcasters, whose collections necessarily include items with unclear lineage.

Australia’s national and state libraries say orphan works comprise between 10% and 70% of their collections[5].

The National Film and Sound Archive says they comprise 20%[6] of its collection.

In most circumstances, the existing law requires users to secure the copyright owner’s permission before copying or using a work, meaning that orphan works can’t be used.

The Film and Sound Archive says scores of projects that would have celebrated Australia’s heritage have been shelved[7] because of the expense and impossibility of locating the descendants of copyright holders.

The proposed changes would permit people to use orphan works if they first conducted a “reasonably diligent[8]” search and as far as reasonably possible[9] clearly attributed the works to their authors.

Read more: 10 'lost' Australian literary treasures you should read – and can soon borrow from any library[10]

The standard is high – users would need to show clear evidence of good-faith efforts to identify and locate copyright owners in order to seek permission.

Other proposed changes include a new fair dealing[11] exception for the quoting of copyrighted material for non-commercial purposes.

It’s not always clear what it’s okay to quote

It is not always clear whether quoting from something infringes copyright. The exception will give researchers confidence.

The government says it will be narrowly tailored to reduce uncertainty and the administrative burden for schools, universities, libraries, museums, government agencies, academics and researchers who quote words from a book, passages from a piece of music or visual images taken from works of art.

Read more: How copyright law is holding back Australian creators[12]

As well, the reforms would streamline licensing arrangements and exceptions for libraries, archives and educational and government institutions to allow things including

These reforms are simple, reasonable, and ought not to be in dispute.

Unfortunately, copyright is such a heated topic that even the easiest fixes are hard.

In the past, proposals for more wide-ranging reform have been opposed[13] by organisations representing copyright holders.

They have called instead for iterative, practical enhancements[14]. 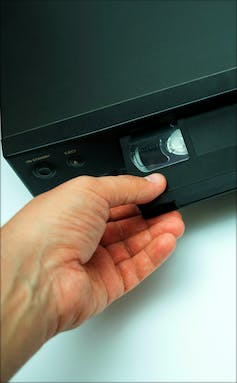 Australia legalised the use of video tape recorders as they became obsolete.

That’s what these changes are. They certainly don’t pose a financial threat to rights holders.

2020 is not the year to expect things to happen quickly. But these reforms are important partly because they respond to problems made apparent by COVID-19.

Proper access to copyrighted materials would enable educational institutions to deliver the same lessons online as they deliver in person. Cultural institutions would be able to service customers unable to visit in person and to people in lockdown.

Hopefully the government will introduce the changes quickly.

But we don’t have a good track record. Australia didn’t get an exception that legalised home use of video tape recorders until 2006[15], the year they began to be replaced by other recording systems[16].

These changes ought to be (and largely are) uncontentious. Researchers, librarians, filmmakers and teachers are waiting.