Australia’s biggest gambling company, Crown Resorts, has been told by the NSW Independent Liquor and Gaming Authority to delay[1] its planned December 14 opening of its A$2 billion Barangaroo casino complex in Sydney.

The authority wants to wait for the completion of the inquiry[2] into Crown Resorts’ fitness and propriety to operate the new casino, before Commissioner Patricia Bergin. Her final report is expected in February 2021.

This is not a surprise. The inquiry has revealed a litany of dodgy behaviour[3] by Crown Resorts. This includes poor governance, management failures, inconsistent and ineffective controls over money laundering, “machine tampering”, misleading public statements and inappropriate special treatment of principal shareholder James Packer[4].

Emblematic of its behaviour are the newspaper advertisements it took out last year attacking whistlebower Jenny Jiang as a “gold digger”, after the former Crown employee went public[5] about money laundering and other illegal activities to lure Chinese high rollers.

Jiang, along with 18 other Crown staff in China, was detained by Chinese authorities in 2016. She was convicted for breaching China’s tough anti-gambling laws.

She told her story again to the ABC’s 7:30 program[6] this week. It epitomises the disarray and avoidance of responsibility that has also characterised Crown’s performance before the inquiry.

The Independent Liquor and Gaming Authority’s decision came after yet more revelations to the inquiry on Tuesday. The company admitted it was “likely” accounts it set up for VIP players had been used for money laundering[7].

This was done via a mechanism known as “cuckoo smurfing[8]”, whereby money is laundered in small amounts not subject to notification (in Australia, less than A$10,000), using the accounts of unwitting legitimate third parties.

Read more: The global war on money laundering is a failed experiment[9]

Commissioner Bergin was reportedly furious[10] about these new admissions, given Crown Resorts officials had already been grilled about the details of bank accounts over the months the inquiry has taken so far. The company claimed its law firm, MinterEllison, had advised it to make no such admissions. The commissioner, unsurprisingly, now wants to see that advice.

Senior counsel assisting the inquiry submitted in early November that Crown Resorts was not a fit and proper person[11] to operate the casino.

This was on the basis of a range of issues, not the least of which were “disgraceful threats[12]” by Packer, when still a director of the company board, that a Melbourne financier said left him fearing for his safety.

Crown Resorts says it will cooperate[13] and open only non-gambling facilities at Barangaroo. 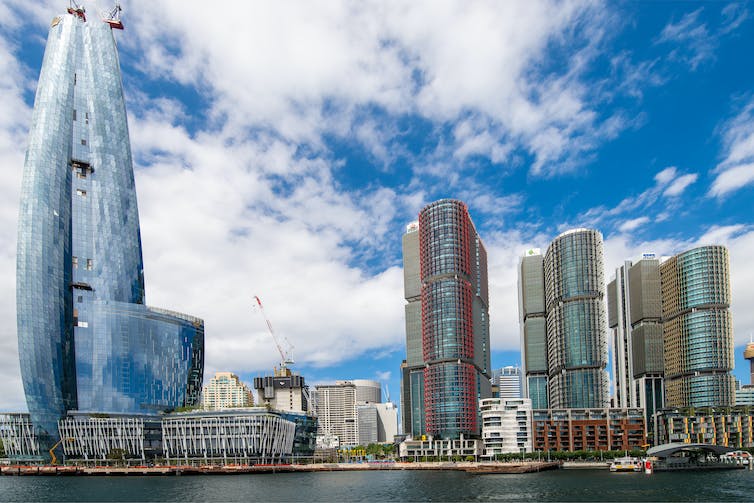 It’s difficult to see how it could do otherwise.

There are now few options for the business. Its well-connected board has been widely castigated. Its management has been revealed to be ineffective and, at the very least, lacking curiosity.

Packer has admitted he might need to substantially reduce[14] his 36% shareholding for the company to survive.

The tenure for chief executive Ken Barton must also be seen as tenuous, given he was Crown Resort’s chief financial officer from 2010 until his promotion this year.

If Crown is found to not be fit and proper

Given all that has been revealed, it is very hard to see how the NSW inquiry can find Crown Resorts is fit and proper hold to hold a casino licence. The secretive — and indeed evasive — manner in which the company seems to have conducted its business is key.

The company’s board may be forced to restructure, and its management replaced or overhauled. Packer may be required to sell down his shareholding. The whole Barangaroo operation might even need to be sold to a new licensee.

Whatever happens will not be a rapid process.

And the high-rollers and tourists who were supposed to patronise the casino will not be flocking to Sydney. In the absence of slot machines, the casino is not going to make a profit any time soon.

There are other very big questions raised from all this.

Not the least of them is the future of Crown’s casinos in Melbourne and Perth, and indeed London. Relevant regulators are watching the inquiry. Relevant governments might want to reflect on these circumstances as well.

Read more: If Crown is unfit to hold a Sydney casino licence, what about Melbourne, and Perth?[16]

The Victorian Commission for Gambling and Liquor Regulation has taken a softly-softly approach to Crown (and other gambling operators). The regulator is under-resourced[17] and does not appear to have the state government’s backing to take a harder line.

The evidence from the NSW inquiry, and its findings, will need decisive responses not just in Sydney but in Melbourne and Perth. It is these casinos, after all, that have profited from the shenanigans revealed by the NSW inquiry.

The Victorian and Western Australian government need to reflect carefully on the appearance of political coverage for the way Crown Resorts has been able to conduct its operations.

To allow business as usual given all we now know would be a major abrogation of responsibility. No government can allow that if it is to retain any semblance of regulatory authority.