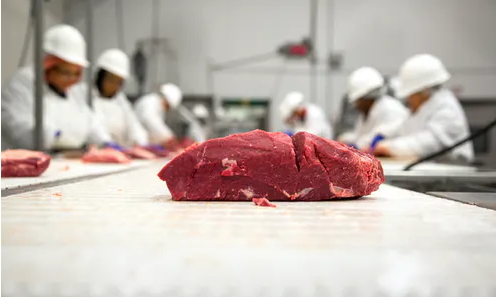 From the United States[1] to Brazil[2], Britain[3], Germany[4] and Australia, meat-processing plants have played a peculiar role in spreading COVID-19.

In Brazil, union officials[5] allege one-fifth of the industry’s employees – about 100,000 meat plant workers – have been infected. In the US, meat-processing facilities have been linked to more than 38,500 cases and at least 180 deaths[6]. Meat works made up almost half [7] of US COVID-19 hotspots in May. They were also the major initial source of infections in Australia’s June “second wave” outbreak in the state of Victoria.

One reason for these transmissions is that meat processing takes place in confined refrigerated spaces. But the fact the industry has not been linked with large viral outbreaks in all countries and regions suggests other, controllable factors have also been instrumental.

The fundamental lesson from these outbreaks is that unhealthy working conditions and precarious work need to be addressed to stop the meat industry acting as an incubator of COVID-19.

Past studies have shown influenza and other coronaviruses (SARS and MERS) are more stable[8] and therefore spread more easily in lower temperatures[9]. Though lower temperatures have not yet been conclusively proven to increase COVID-19 transmissions, Australian researchers have identified an association with lower humidity[10]. 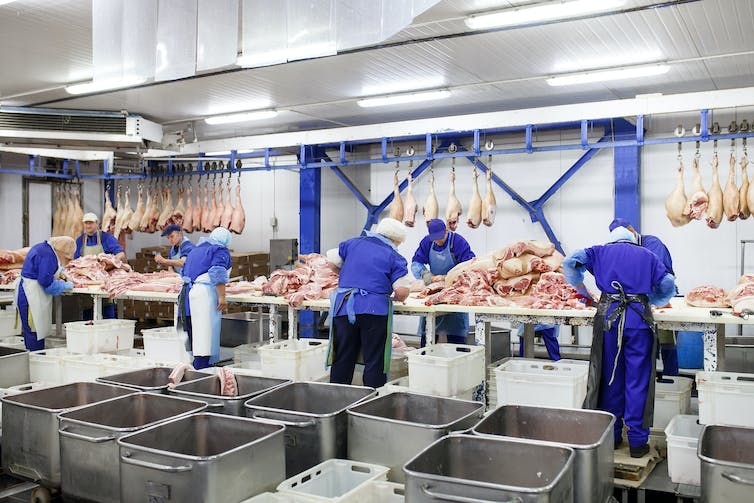 Shutterstock This alone increases the risk to meat-processing workers, who perform strenuous manual labour on a production line in relatively close proximity to others. But that risk is compounded by other factors – particularly poor air quality contributing to respiratory illness, which makes any COVID-19 infection[11] more severe. As noted by the US Occupational Safety and Health Administration[12], among the “many serious safety and health hazards” long associated with meat-processing work are “biological hazards associated with handling live animals or exposures to faeces and blood which can increase their risk for many diseases”. A 2017 study[13] found respiratory disorders such as coughing, breathlessness and wheezing three to four times more prevalent among slaughterhouse workers than office workers. Among poultry workers, a 2013 study found more than 40% had asthmatic symptoms (compared with about 10% of all adults[14]). This was attributed to “poultry dust”, a biologically active combination of chicken residue, feathers and moulds. 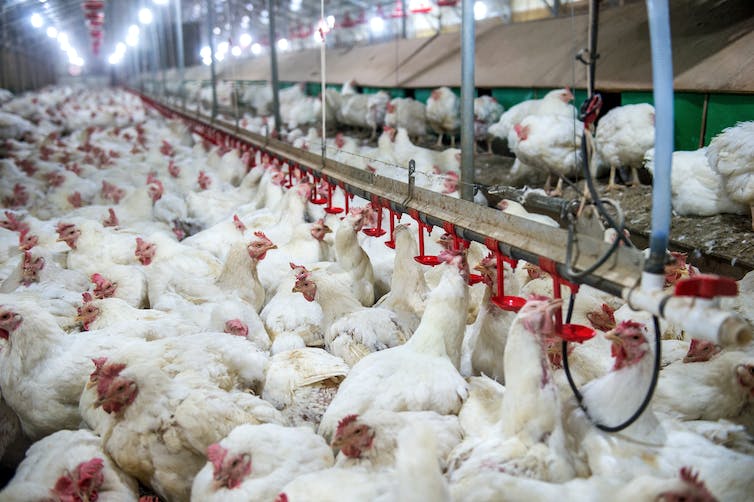 Shutterstock Insufficient ventilation makes the spread of the coronavirus 20 times more likely, according to a report[15] published by the European Federation of Food, Agriculture and Tourism Trade Unions[16] in June. That report lists other factors too, such as inadequate social distancing and a dearth of appropriate personal protective equipment. But ultimately, poor air-quality is symptomatic of the lack of a healthy and safe workplace for many meat-processing workers. It is also pertinent to the rest of us. The American Society for Heating, Refrigeration, and Air‐Conditioning Engineers, for example, has recommended ventilation air intake in all buildings should now be three air changes an hour[17]. That’s three to five times higher than the minimum standard for offices. What this all comes down to is a critical need to improve health and safety standards in abattoirs and meat processing facilities across the board. Read more: The death of the open-plan office? Not quite, but a revolution is in the air[18] Increase job security and sick leave entitlements The other main lesson to be drawn from the meat-processing industry is the risk posed by “precarious work”, where workers lack the rights and protections of being an employee. It is no coincidence, as the European Federation Union report argues, that the vast majority of meat workers testing positive in Europe have been migrant workers, hired through subcontractors, with few employment rights and often living in overcrowded accommodation. An estimated 80% of meat workers[19] in the Netherlands, for example, are from central and eastern Europe, employed through temporary agencies. Workers are typically employed as casuals, or “daily hires” (meaning their jobs technically terminate at the end of every shift) or through subcontracting arrangements that deem them “self-employed”. As the report notes: Employment conditions for many meat workers are extremely precarious. Moreover, the level of sick pay allowances can be very low. This may have determined the fact that in case of experiencing COVID-19 symptoms some workers have not reported the status of their health conditions for fear of losing their job or for not being able to afford a decent living with sick pay allowances. 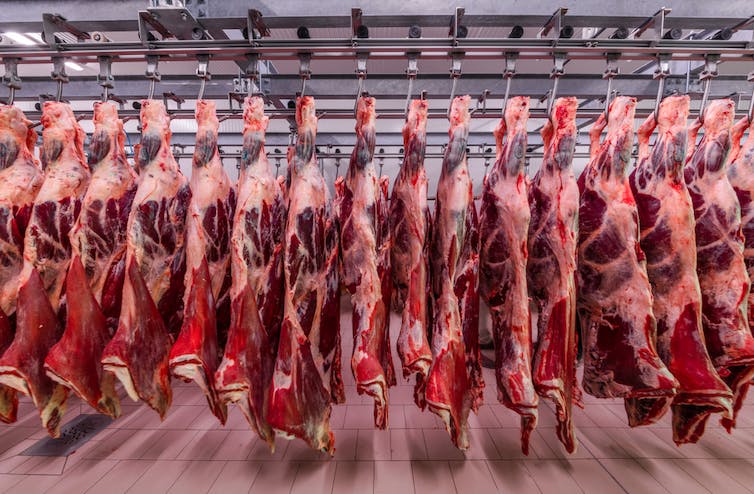 Shutterstock These things can be fixed Evidence from a number of countries shows these things can be fixed. Denmark is the poster-child for the automation of meat processing and decent pay[20], allowing for social distancing within factories and thus low COVID-19 outbreaks. In Spain, a collective agreement[21] that guarantees subcontracted workers the same conditions as other employees has been credited with controlling COVID-19 transmissions. In Germany, transmissions linked to meat processing slowed after abattoirs were banned from hiring temporary workers[22] in May. In Victoria, Australia, ensuring all workers have access to paid pandemic leave (along with other measures including the government mandating strict physical distancing and safety protocols in plants) appears to have proven successful. But many of these responses are only temporary emergency responses. The global pandemic has brought global attention to the longer-term need for systemic reform to eliminate the dangers of unhealthy workplaces and disempowered workers, and ensure that workers can afford to stay home when they are sick. In a sense we are all complicit in a system that has seen working conditions worsen over the last decade. We’ve accepted the rise of complex subcontracting and fake “phoenix” companies designed to strip workers of employee status, and supermarket and fast-food chains pushing cost pressures down supply chains, simply because we like cheap meat. Read more: Workplace transmissions: a predictable result of the class divide in worker rights[23] There are moves in Europe to address this lack of accountability through extending legal liability throughout the whole subcontracting chain[24]. Other countries would do well to learn from these examples. One way or the other, our love of cheap prices shouldn’t see workers getting treated like meat.