More than ever before, auctions shape the economy.

Sites such as eBay have made them an everyday transaction. The placement of every Google ad is priced by an instantaneous mini-auction. Governments use them to allocate radio spectrum[1] and to run emissions trading schemes.

The 2020 Nobel Prize in economics has been awarded to two Americans, Paul Milgrom[2] and Robert Wilson[3], for their work in analysing auctions and how to make them more efficient.

The two professors are close collaborators. They both work at Stanford University in California and also live on the same street.

The economics prize is not one of the original categories endowed from Alfred Nobel’s will. Its formal name is the Sveriges Riksbank Prize in Economic Sciences in memory of Alfred Nobel. The winners are selected by the same Royal Swedish Academy of Sciences that awards the prizes for physics and chemistry[4].

Milgrom and Wilson work in various areas of economics (notably game theory) but are best known for their work in market design. Milgrom was awarded his PhD from Stanford in 1978, where he was one of Wilson’s students.

The American Economics Association has described Milgrom as the world’s leading auction designer[5]. His work has been cited more than 100,000 times[6].

The Royal Swedish Academy of Sciences has emphasised that Milgrom and Wilson have won the award for both their theoretical work and its practical application in auctions.

This is not the first time the economic prize has gone to theory relevant to auctions. William Vickrey and James Mirrlees won in 1996 for their work on incentives.

The 2017 winner, behavioural economist Richard Thaler, has also brought attention to the phenomenon at the heart of the work for which Milgrom and Wilson have been awarded – known as “the winner’s curse”.

The winner’s curse arises from people bidding for something whose value is unknown at the time but will be agreed later. Economists call this a “common value” auction.

An example might be the right to mine for gold in a certain location. If no gold is found, the right will turn out to be worthless. If there is a lot of gold, it will be valuable.

Different bidders may have different opinions about how much gold is in the site. The more optimistic they are, the more they will be willing to bid. The most optimistic bid will win.

But the true value is likely to turn out much closer to the average rather than the highest valuation. So winning bidders are likely to overpay.

Wilson’s work has shown the fear of the winner’s curse leads rational bidders to bid less than their own valuation.

Greater uncertainty, or the belief some participants have more information than others, will make bidders even more cautious. Their final price will therefore be lower.

Milgrom built on this to examine the case of auctions where there is not only a common value but also a private value that differs between bidders.

An example would be a house. A quiet, safe and convenient location is likely to be a common value. But features such as a pool or a large garden might be valued very differently, as some buyers see them only as a chore.

This will give rise to different private values.

The design of the auction matters

The most common type of auction is an “English auction”, where the auctioneer starts with a low price and it is bid up until only one bidder is left.

There are also “Dutch auctions”, where the auctioneer starts with a high price and lowers it until someone buys.

Economists had assumed the format of the auction would make no difference to the outcome. But Milgrom showed the problem of the winner’s curse is greater in the Dutch auction, because bidders do not learn anything from watching other bidders drop out.

The final price is therefore likely to be lower in a Dutch auction.

How have such insights helped society? 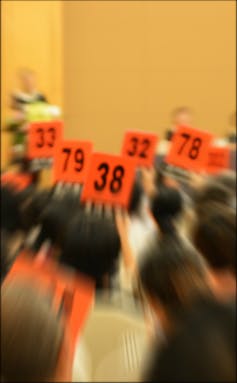 For one thing, Milgrom and Wilson developed a complex form of auction – the “simultaneous multiple round auction”. This allows bidding for more than one thing at the same time and allows repeated bids.

It is useful, for example, if a company wants to bid for a licence in one area only if it can also have the licence in another area.

If the auctions were held sequentially, the uncertainty about winning the second auction would depress bids in the first auction.

This gives governments more money to spend on public services such as health and education.

Economists are often derided as “academic scribblers”. This year’s Nobel economics prize is a clear example of economists having practical outcomes in the public interest.