But you’re unlikely to read about it in next week’s budget.

Instead you’re likely to read about new (male dominated) construction projects and more work in the electricity and gas industries. And tax cuts, which predominantly benefit higher earners and so are of less use to females.

Once, the gender impacts of the budget would have been apparent.

Until the first Abbott-Hockey budget in 2014, a statement of budget measures that disproportionately affect women was published at budget time.

At times given different names, the first was delivered with the Hawke government’s 1984 budget. 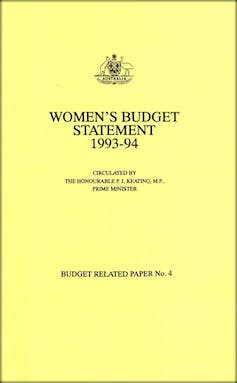 In its foreword, then Prime Minister Hawke promised that “within the overall economic objectives of the government” important budget decisions would from then on be made “with full knowledge of their impact on women”. These women’s budget statements shed light on the impact of decisions that might have been thought to have little to do with gender, such as the Hawke government’s reduction of tariffs on imports of clothing, textiles and footwear. The statement pointed out that two-thirds[1] of the workers in these industries were women and that without special support for retraining (which was given) they would be disproportionately disadvantaged. Increasingly, and especially during the Rudd and Gillard governments, the statements made visible the economic impact of women’s greater responsibility for unpaid care work. At its best, the Women’s Statement improved decisions Much of its success was in raising awareness of the differential impacts of policies on women and men (and on different groups of women and men) which challenged the myth of gender neutral budgets. Because the gender impact of budget decisions had to be reported in the statements, sometimes these decisions were improved. Our analysis[2] of each of the statements finds that in the later years they changed their emphasis from an analysis of budget measures to an account of the measures thought to benefit women. Read more: Gender neutral policies are a myth: why we need a women's budget[3] This is unsurprising as governments like to celebrate their achievements. In 2013 the statement was renamed “women’s budget highlights[4]”. After 2014, the National Foundation of Australian Women has produced its own analysis of the impacts of on women[5] each year as has the Labor opposition. While these analyses are crucial for encouraging accountability, they are not a substitute for the government undertaking its own analysis of the gender impacts of its budgets and policies and ensuring they are improved. Outside analysis isn’t the same For one thing outside analysts don’t have access to the data treasury has[6]. For another, they produce their reports after decisions have been made. After the current six-year program of tax cuts was announced in 2018, the Parliamentary Budget Office[7] found that A$92 billion of the $144 billion was likely to go to men. The then treasurer Scott Morrison belittled[8] the calculation, saying you don’t fill out pink forms and blue forms on your tax return, it doesn’t look at what your gender is any more than it looks at whether you’re left handed or right handed or you barrack for the Sharks or you barrack for the Tigers Rarely have we needed inside analysis more COVID-19 has made the need for gender analyses more apparent. It has increased the care needs of households and demonstrated that the response to these needs, most commonly by women, is critical to maintaining the economy. At times, this need has been acknowledged. The capacity of many parents (most typically mothers) to participate in paid work was undermined when childcare centres and schools shut down. Recognising this, when childcare centres reopened, fees were cut to zero and places were reserved for the children of essential workers. The subsequent rolling back of these measures once again rendered the economic importance of care invisible, with negative gender impacts. Read more: Childcare is critical for COVID-19 recovery. We can't just snap back to 'normal' funding arrangements[9] Gender responsive budgeting could make a substantial contribution, documenting the extent to which investment in childcare and other services is more likely to create jobs[10], and jobs for women, than spending on construction. While the current government appears uninterested, the tide is turning. Almost half of the 37 countries in the Organisation for Economic Co-operation and Development now have some form of gender budgeting. The former head of the International Monetary Fund has declared it good budgeting. [11]