Outraged investors have forced the board of Rio Tinto to sack its chief executive Jean-Sebastien Jacques[1] along with two of the senior executives partially responsible for the destruction of the Juukan Gorge caves[2] in the Pilbara region of Western Australia, which contained evidence of human habitation 46,000 years ago. 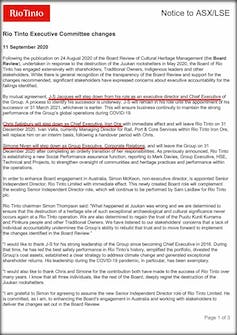 Rio Tinto announcement to ASX[3] Why did the company commit this egregious act of cultural vandalism[4]? There are several layers to the answer. First, Rio Tinto’s iron ore division was under extreme production pressure. The iron ore in the vicinity of the caves was very high grade and the company needed as much of it as possible to mix with other grades so as to supply the market with its trademark Pilbara blend[5]. Its reputation as a reliable supplier depended on it. Rio Tinto was siloed It was authorised under West Australian law to mine the area, even though this would destroy the caves, and it intended to exercise this legal right, regardless of any opposition. Second, Rio has a segmented organisational structure. It’s product divisions – iron ore, aluminium, copper and diamonds, minerals and energy – operate as autonomous business units with relatively little control from the corporate centre. When things go well, such an organisational structure is highly profitable for the corporation as a whole, because it leaves each product division free to take advantage of whatever opportunities there are in its particular market. Read more: Rio Tinto just blasted away an ancient Aboriginal site. Here’s why that was allowed[6] But there is a downside. It leaves the corporation vulnerable to poor decision making by any one of its product divisions, decisions that may have disastrous human and environmental consequences that threaten the social license[7] of the whole corporation. That is what has happened in the Juukan Gorge case. Organisational weakness Of course, Rio was aware of this downside of its organisational structure and had taken steps to deal with it. It had various functional lines – chains of command – external to the product divisions, providing services into the divisions and exercising some degree of control over their decision making. At the lower end of these chains were people working within the product divisions and at the top, an executive sitting on the executive committee of the corporation, that is, at the same level as the heads of the product divisions. These functional executives were thus in a position to challenge the product division heads about the decisions they were making. Read more: Destruction of Juukan Gorge: we need to know the history of artefacts, but it is more important to keep them in place[8] One of these external functions was called communities, or Indigenous relations. It had staff located within Rio Tinto Iron Ore whose job was to assess and manage the company’s impact on indigenous people and where necessary, to negotiate with them for access to land. The chain of command for this function led upwards to an executive for corporate relations, on the executive committee of corporation. Corporate relations had not always had a seat at this table. For decades it had reported to the head of either human resources or legal[9], both of whom sit on the executive committee. Indigenous relations were ‘corporate relations’ When Jacques became chief executive in 2016, he elevated the head of corporate relations to sit on the executive committee, “to ensure that ‘social license’ areas were reflected as an area of specialisation around the executive committee[10].” Theoretically this function should have been able to pass the word up the line about the impending destruction of the Juukan Gorge caves, so that either the executive for corporate relations or the chief executive himself might have intervened. This didn’t happen. The function that should have acted as a watchdog in this situation failed to do so. The explanation lies in part in how the executive committee is structured. It consists of all those who report directly to the chief executive. It would make the job of the chief executive too unwieldy if every area of activity was directly represented on this committee, so only the most important are. Less important areas are grouped together and collectively represented. Structure matters This means the makeup of the executive committee sends a signal about relative importance. It consists of the heads of the four product divisions, plus the head of human resources, the chief legal counsel, a chief commercial officer, a chief financial officer, a single head for a grouping consisting of growth, innovation, and health safety and environment, and the aforementioned London-based head of corporate relations, Simone Niven, who is now departing. 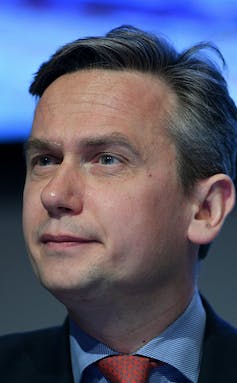 Departing CEO Jean-Sebastien Jacques. This is the team of direct reports to the chief executive. It means that Indigenous relations is not represented directly at this level. It is grouped with several other specialisations in the portfolio managed by corporate relations. That portfolio consists of external affairs, sustainability, communities (Indigenous relations), brand, media, government affairs and employee communications. This is a massive span of concerns, each of which is potentially very demanding. Indigenous relations must compete with all these other concerns for the attention of the head of corporate relations, and not surprisingly, it did not always get the attention it deserved. Indeed, Niven had not heard about the Juukan Gorge caves until just days before the destruction[11], and even then, she was apparently unaware of extraordinary significance or age of the caves. The situation was worse. Her direct reports did not include anyone with dedicated accountability for Indigenous relations. The way it worked was that people with a particular responsibility for Indigenous relations at Rio’s iron ore operations in Australia reported to an Australian head of corporate relations, who in turn reported to the global head. Read more: World-first mining standard must protect people and hold powerful companies to account[12] This Australian head had the same diverse portfolio of concerns as did his global boss, which again meant it was difficult for Indigenous relations to get the attention it deserved. Moreover, a look at his resume suggests that Indigenous relations was not a significant part of his professional experience. As well as a primary reporting line to global head of corporate affairs, the Australian head had a secondary or dotted reporting line to the head of Rio Tinto iron ore[13]. As head of the Indigenous relations function it would have been his role to elevate the Juukan Gorge matter to the senior leadership team of Iron Ore, well before preparations to blast the area began. However, it seems he had very little awareness of the issue and was himself briefed about it at a meeting just three days before the blast occurred[14]. Even then, the briefing paper “did not identify the exceptional significance of the sites or their age[15]”. Read more: How Rio Tinto can ensure its Aboriginal heritage review is transparent and independent[16] In short, the indigenous relations function failed dismally to alert top management because it had lost its influence and been swallowed[17] by a corporate relations function with a much wider remit. This is the fourth and critical level of level of explanation. Has Rio learnt its lesson? The changes which the Rio board has announced suggest it has learnt this lesson. First, it announced that a “social performance[18]” function will be established that reports to an executive on the corporate executive committee. Social performance is broader than Indigenous relations, but it is far more focussed on the rights of project-affected people than is the broad concept of corporate relations.

Juukan Gorge caves before destruction. Puutu Kunti Kurrama And Pinikura Aboriginal Corporation[19] Second, the board specifies that the executive concerned will is also be the culmination point for heath, safety and environment, as well as technical and projects. The inclusion of “projects” might be a serious drawback, since that role is likely to be production-oriented. It conflicts with the thrust of the health, safety and environment and social performance roles, which aim to ensure these issues are not sacrificed in the interests of production. Third, as well as being part of a specialised function that reports up to the executive committee, social performance staff will be “embedded” within local mine management. They will have secondary reporting lines within Rio Tinto Iron Ore which will enable them to exercise more influence than previously. Read more: Rio Tinto's climate change resolution marks a significant shift in investor culture[20] The critical question is whether the social performance function will retain its identity to the top of the hierarchy. Specifically, will it be headed by a corporate social performance specialist who answers directly to the relevant executive on Rio’s executive committee. If not, the social performance will be swallowed, just as was Indigenous relations before it. Companies tend to implement major organisational changes after a disaster that affects the whole corporation. The Juukan Gorge matter was, among other things[21], a corporate public relations disaster for the whole company. Now is the time to fix the organisational failings that contributed to it. If Rio Tinto fails to implement the lessons effectively, the sacrifice of three of its corporate chiefs to appease investors will have been in vain.