Since the Indian Ocean tsunami of 2004, disaster recovery plans are almost always framed with aspirational plans[1] to “build back better”. It’s a fine sentiment – we all want to build better societies and economies. But, as the Cheshire Cat tells Alice when she is lost, where we ought to go depends very much on where we want to get to.

The ambition to build back better therefore needs to be made explicit and transparent as countries slowly re-emerge from their COVID-19 cocoons.

The first three are obvious. We clearly want our economies to recover fast, be safer and be more sustainable into the future. It’s the last objective – fairness – that will inevitably be the most challenging long-term goal at both the national and international level.

Economic fallout from the pandemic is already being experienced disproportionately among poorer households, in poorer regions within countries, and in poorer countries in general.

Some governments are aware of this and are trying to ameliorate this brewing inequality. At the same time, it is seen as politically unpalatable to engage in redistribution during a global crisis. Most governments are opting for broad-brush policies aimed at everyone, lest they appear to be encouraging class warfare and division or, in the case of New Zealand, electioneering[4]. 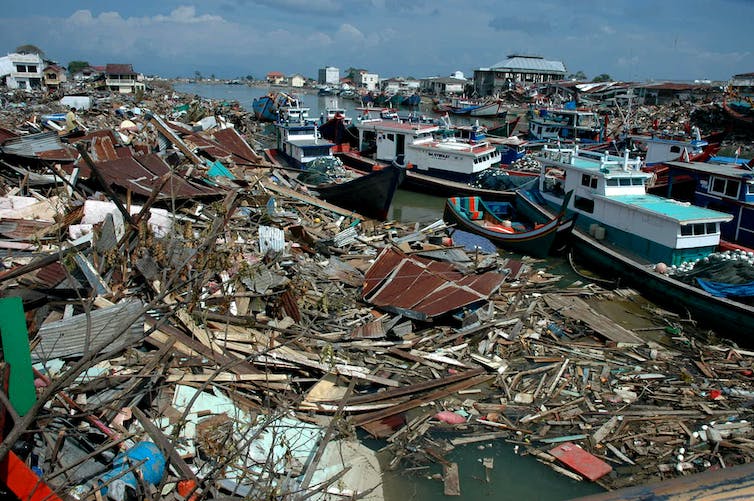 Banda Aceh, Indonesia, after the 2004 tsunami: the impact of disaster is not felt equally by all. www.shutterstock.com

In fact, politicians’ typical focus on the next election aligns well with the public appetite for a fast recovery. We know that speedier recoveries are more complete, as delays dampen investment and people move away from economically depressed places.

Speed is also linked to safety. As we know from other disasters, this recovery cannot be completed as long as the COVID-19 public health challenge is not resolved.

The failure to invest in safety, in prevention and mitigation, is now most apparent in the United States, which has less than 5% of the global population but a third of COVID-19 confirmed cases. Despite the pressure to “open up” the economy, recovery won’t progress without a lasting solution to the widespread presence of the virus.

Economic potential also aligns with political aims and is therefore easier to imagine. A build-back-better recovery has to promise sustainable prosperity for all.

The emphasis on job generation in New Zealand’s recent budget was entirely the right primary focus. Employment is of paramount importance to voters, so it has been a logical focus in public stimulus packages everywhere.

Fairness, however, is more difficult to define and more challenging to achieve.

While a rising economic tide doesn’t always lift all boats – as the proponents of growth-at-any-cost sometimes argue – a low tide lifts none. Achieving fairness first depends on achieving the other three goals. 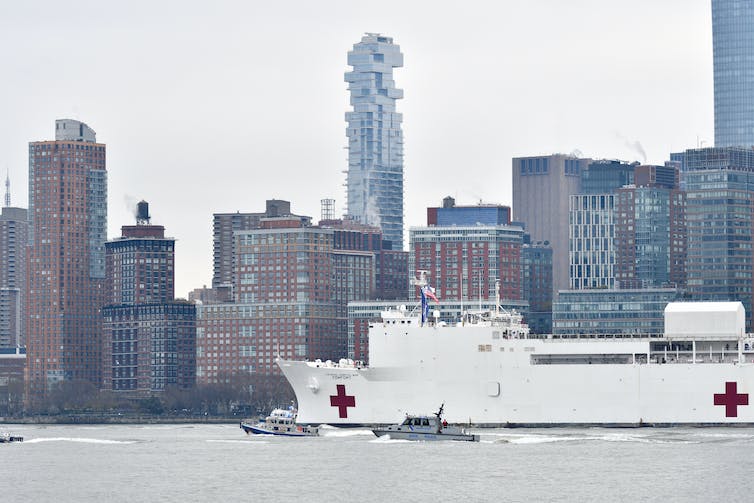 Under-prepared and under-resourced: the hospital ship Comfort arrives in New York during the COVID-19 crisis. www.shutterstock.com

Economic prosperity is a necessary precondition for sustainable poverty reduction, but this virus is apparently selective in its deadliness. Already vulnerable segments of our societies – the elderly, the immuno-compromised and, according to some recent evidence, ethnic minorities[6] – are more at risk. They are also more likely to already be economically disadvantaged.

This pattern of increased vulnerability to shocks in poorer households is not unique to epidemics, but we expect it to be the case even more this time. In the COVID-19 pandemic, economic devastation has been caused by the lockdown measures imposed and adopted voluntarily, not by the disease itself.

These measures have been more harmful[8] for those on lower wages, those with part-time or temporary jobs, and those who cannot easily work from home[9].

Many low-wage workers also work in industries that will be experiencing longer-term declines associated with the structural changes generated by the pandemic: the collapse of international tourism, for example, or automation and robotics being used to shorten long and complicated supply chains.

Read more: Defunding the WHO was a calculated decision, not an impromptu tweet[10]

Poorer countries are in the worst position. The lockdowns hit their economies harder[11], but they do not have the resources for adequate public health measures, nor for assisting those most adversely affected.

In these places, even if the virus itself has not yet hit them much, the downturn will be experienced more deeply and for longer[12].

Worryingly, the international aid system that most poorer countries partially rely on to deal with disasters is not fit for dealing with pandemics. When all countries are adversely hit at the same time their focus inevitably becomes domestic.

Very few wealthy countries have announced any increases in international aid. If and when they have, the amounts were trivial – regrettably, this includes New Zealand[13]. And the one international institution that should have led the charge, the World Health Organisation, is being defunded[14] and attacked by its largest donor, the US.

Unlike after the 2004 tsunami, international rescue will be very slow to arrive. One would hope most wealthy countries will be able to help their most vulnerable members. But it looks increasingly unlikely this will happen on an international scale between countries.

Without global empathy and better global leadership, the poorest countries and poorest people will only be made poorer by this invisible enemy.