Calls by the head of the Australian Competition and Consumer Commission Rod Sims for Australian businesses to cut the hurdle rates of return they expect on new investments should be taken with a grain of salt.

A hurdle rate[1] is the minimum annual return that an investor or firm demands in order to allow a new project to go ahead.

For years, interest rates have been falling, cutting the cost of borrowing, but the hurdle rates of return demanded from that borrowing have remained little changed.

Sims told the Australian Financial Review[2] this month that the rates of return demanded should be lower because interest rates were lower. 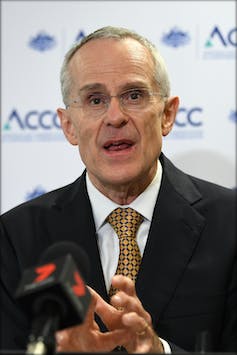 “We don’t want to lose investment that we should otherwise get because of hurdle rates that are too high,” he said.

“And we don’t want overseas companies coming in and buying our assets because they’ve got more realistic hurdle rates”.

It is straight from the Reserve Bank’s playbook.

Both the present Reserve Bank governor Phillip Lowe and his predecessor Glenn Stevens have said the same thing.

“We hear reports that a hurdle rate of return of 13-14% has been hard-wired into the corporate culture in some companies,” Lowe said in October[3].

This is especially so for investments with long-term payoffs, because future returns no longer need to be discounted as highly. This means that low interest rates give us the opportunity to lengthen our horizons and think about projects with really long-term payoffs.

Lowe and Sims are right to observe that some hurdle rates remain surprisingly high.

What if the reluctance to invest is rational?

Investment in mining and manufacturing projects is way below earlier peaks notwithstanding record low interest rates, even though investment in other industries is close to its historical high.

Which suggests something else could be in play, and not only here. Some overseas hurdle rates are as high as 12% to 15%.

A dampened appetite for risk is one explanation, thanks to a rise in global economic policy uncertainty. Another is challenging business conditions, especially in Australia’s two largest sectors; banking and resources.

Consensus estimates of future profits have been downgraded.

Profit forecasts have been downgraded

Among the ASX 200, which are the 200 most valuable companies traded on the Australian Securities Exchange, the consensus forecast for annual returns has slid to its lowest point in three years. Among the major banks consensus estimates have slid to their lowest level in two decades.

This largely reflects the lift in minimum capital requirements imposed by the Australian Prudential Regulation Authority, higher compliance costs associated with the implementation of the banking royal commission recommendations and the divestment of high returning wealth management businesses whose activities are no longer tenable for banks in the wake of the royal commission.

Demands from shareholders have been upgraded

In contrast, the expected profitability of mining companies has improved. But they are increasingly disciplined about how they use their capital, focused instead on generating free cash flow.

They are conscious of catering to greater demand from their shareholders for dividends and share buybacks.

Those shareholders remember well the destructive growth strategies pursued at the peak of the China boom a decade ago.

Most are happy that the dividend payout ratio for the sector has climbed well above long term norms to 60%, meaning that six dollars out of every ten dollars of profit is paid out to shareholders rather than invested back in the business.

Read more: We asked 13 economists how to fix things. All back the RBA governor over the treasurer[4]

Against this backdrop, the competition watchdog and the Reserve Bank bemoaning what they consider to be stubbornly high hurdle rates will do little to precipitate a recovery in investment.

The Reserve Bank would achieve more by making an unambiguous commitment to do whatever it takes to achieve its inflation target, which it has undershot for the past five years.