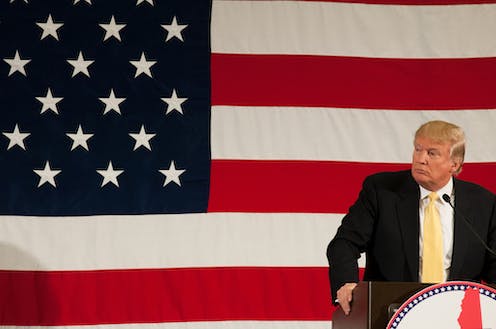 US President Donald Trump has levied a 25%[1] tariff on steel and a 10% tariff on aluminium[2] imported from all countries except Canada and Mexico. Trump had hinted[3] that the trade protections would exclude Australia, but it wasn’t explicitly exempted.

Regardless, import tariffs on steel and aluminium will have only a small impact on the Australian economy, as Australia isn’t a large exporter of steel or aluminium. What Australia does export to the United States is covered by a free trade agreement.

Even though the European Union, China and other countries will have tariffs levied on their steel and aluminium exports, the US move is unlikely to escalate into a trade war. The World Trade Organisation[4] has powers to sanction countries that arbitrarily impose tariffs.

And Trump’s justification for the tariffs in the first place, that the United States is losing something due to running trade deficits, has been thoroughly debunked by modern economics.

A tariff imposed on any good is an extra tax that raises its sale price equivalently, making it less attractive to buyers than the domestically made product.

There could be some concern if the United States extends tariffs to beef, other meat products, aircraft parts, pharmaceuticals and alcoholic beverages. These goods comprise the top five Australian exports to the United States[6] and account for considerably larger trade volumes than steel and aluminium.

Yet there is no reason to expect tariffs will suddenly be imposed on these major exports, given the provisions of the Australia–United States Free Trade Agreement[7].

This agreement comprehensively covers trade in goods and services, as well as investment flows, between the two nations. It eliminated many of the pre-existing tariffs affecting trade.

US Vice President Mike Pence has even described[8] this free trade agreement as “a model for the world”.

The World Trade Organisation to the rescue?

In 2002, President George W. Bush imposed tariffs[9] of up to 30% on imported steel in the midst of major structural change in the US steel industry. Major steel exporters Canada and Mexico were exempt from the Bush tariffs under the provisions of the North America Free Trade Agreement[10].

But there are grounds for hoping history will repeat and the World Trade Organisation will slap down the new tariffs, given the possible trade ramifications if countries retaliate with their own tariffs[13].

If the World Trade Organisation upholds the Trump tariffs, it could herald the end of the international trading system that has operated passably well over recent decades.

Trump frequently laments the persistent trade deficits the United States runs against other major economies, notably China, Japan and Germany, and refers to these deficits to justify protectionist measures.

But this argument isn’t new – the idea that trade deficits are “bad” for an economy has been around since economics as an academic discipline began.

For instance, one strand of economics[14] from Elizabethan England advocated achieving trade surpluses as the means to national prosperity. In the words[15] of a leading proponent, Thomas Mun, it was necessary to “sell more to strangers yearly than we consume of theirs in value”.

But this doctrine has been soundly debunked, first by the father of economics, Adam Smith[16], and modern economic theory has since confirmed Smith’s position.

Read more: There may be a silver lining to Trump's trade policies[17]

Modern economics[18] shows that trade and current account deficits (a broader measure of trade that includes international money flows) are not problematic. This is because they are inflows of capital that can lead to increased domestic investment.

In other words, running a trade or current account deficit can actually assist economic growth, just as it has for Australia[19], by enabling lower long-term interest rates and higher capital accumulation than otherwise.

The major exception to this is when foreign capital inflow finances government budget deficits, thereby strengthening the local currency and worsening international competitiveness.

Ironically, the American manufacturing sector could suffer greater damage from lost international competitiveness than from cheap steel and aluminium imports.