Every good race needs an avid audience of dedicated fans to spur the competitors along and the 36th America’s Cup[1], which starts today, is no exception.

But current protocols are a far cry from the event’s rarefied and remote origins in Britain. For most of the cup’s history, the race was sailed on offshore courses away from the viewing public, under the auspices of elite yacht clubs.

Times have changed. Team New Zealand CEO Grant Dalton specifically sited the opportunity[2] of racing in the enclosed waters of Auckland’s Waitematā Harbour as a way to maximise the public’s ability to view the event from land.

“This America’s Cup is for everyone,” says Team New Zealand’s Ray Davies.

This has been the way Aucklanders have watched regattas since the early colonial days when two of New Zealand’s favourite diversions, gambling and sailing, collided.

Read more: Why we should release New Zealand's strangled rivers to lessen the impact of future floods[3]

The Waitematā provides a series of perfect outdoor arenas[4] for both local regattas and the courses set by the America’s Cup Race Committee.

And the new AC75 class[5] chosen for the current America’s Cup are purpose built — large foiling yachts that sail like rockets, adding scale, acceleration and vivid visual spectacle to the drama of match racing. 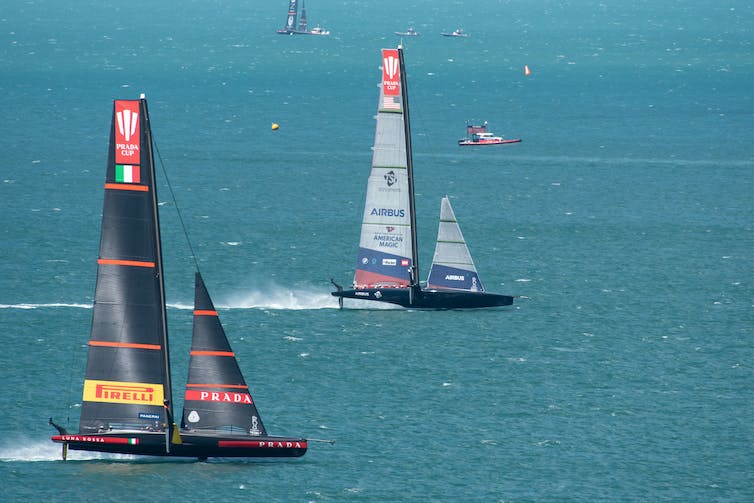 A race offshore, out of sight

Founded in Britain in 1851[6], the America’s Cup quickly became dominated by the New York Yacht Club. The US held the cup for 128 years until it was won by Australia in 1983[7].

A win by New Zealand in 1995[8] firmly embedded Southern Hemisphere locations in the race circuit. And it was there that real public engagement began. Syndicate bases became visible or accessible, first in Fremantle in 1986 and then in San Diego in 1995. 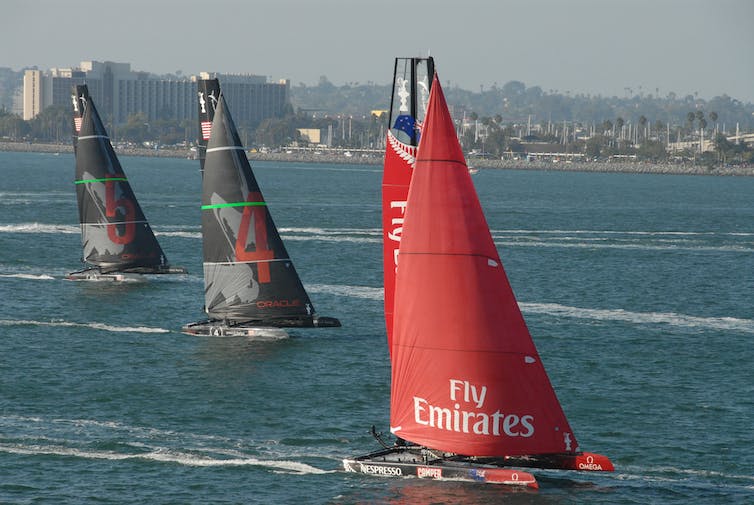 People got to see more of the racing in places such as San Diego, US. Flickr/Port of San Diego, CC BY[9][10]

In Auckland’s Viaduct Harbour, the cup facilities were integrated into a new mixed-use urban extension of the city for the 2000 and 2003 challenges. But the racing was still well away from public view in the Hauraki Gulf.

Then-Team New Zealand boss Sir Peter Blake[11]’s vision for the 2000 America’s Cup was to have a venue where the syndicate bases were integrated into a vibrant waterfront neighbourhood.

Auckland was ripe for this kind of development. The result was the establishment of the city’s first waterfront precinct and the unlocking of urban coastal space from its 19th century industrial origins.

From London to Buenos Aires and beyond, industrialised waterfronts had undergone revitalisation for several decades. The America’s Cup helped Auckland join the trend. 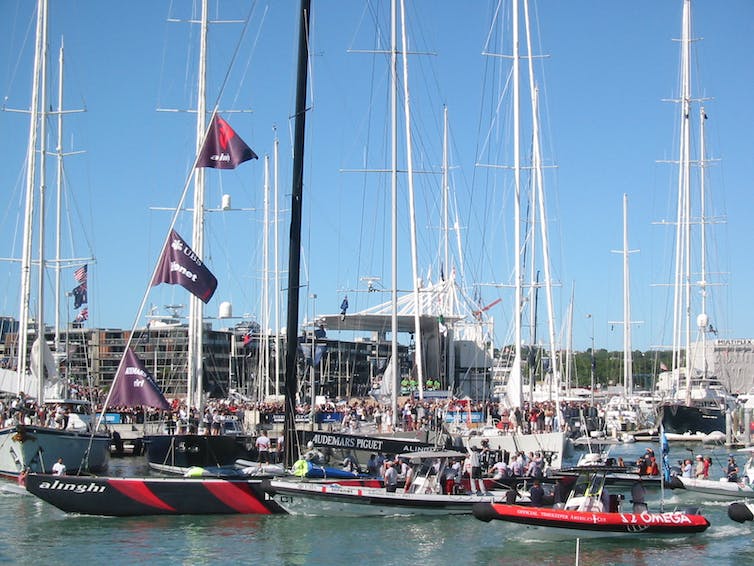 The Viaduct Harbour gave people a chance to get up close to the yachts from the America’s Cup. Flickr/Yasuhiro Chatani, CC BY[12][13]

The construction of the Viaduct Harbour provided an opportunity for high-quality public space to evolve at the centre of Auckland. The new precinct and its flagship event added valuable waterfront real estate and boosted the city economy.

The development became a benchmark for future urban design initiatives in the city, such as the Wynyard Quarter and Tank Farm, with the former now housing the America’s Cup race village.

Valencia in Spain tried the same formula but struggled to maintain an accessible public space in the wake of international terrorism and aggressive security measures.

The idea behind all these developments was to engage a wider audience for these largely elitist events. The trouble was, the public in the cup village settings only witnessed the yachts leave and return to base — albeit in style and with fanfare.

Broadcasting races with computer graphic enhancements on outdoor and home screens significantly enhanced the global audience for sailing. But the racing itself was remote.

The spectator environment changed for the San Francisco challenge in 2013 where the natural environment allowed race viewing within the land-captured waterways of the Bay Area. 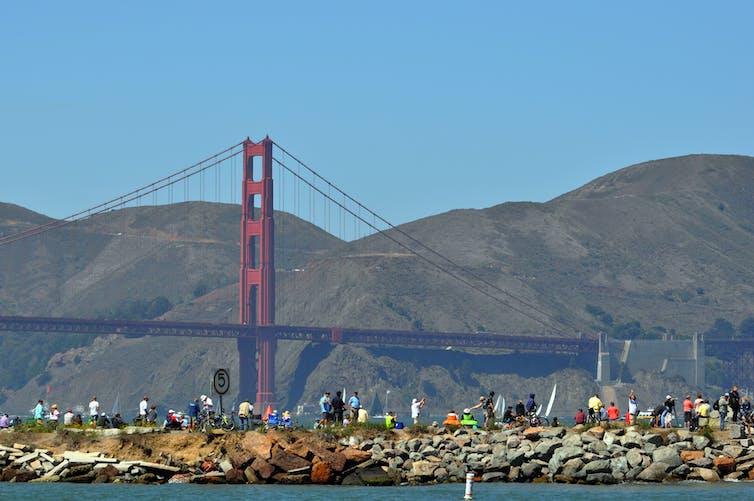 This created the perfect observation platform and the experience was replicated on the Great Sound in Bermuda in 2017.

It was a logical move for the New Zealand organisers to configure the race courses to allow people to line the coastal promontories, or to watch from vessels anchored on the race-course boundaries as the new nautical flying machines cut up and down the harbour at astronomical speeds.

With a choice of inshore and offshore courses, it has also been possible to avoid public gatherings during COVID-19 lockdowns by opting for the more remote course. This happened in the latter stages of the Prada Cup[16] challenger series in February when Auckland was at alert level 2.

The spectacle works because of the large scale (26.5 metre masts) and airborne demeanour of these semi-flying machines, which reach speeds of more then 50 knots (90+kmh) as they foil around the course.

By comparison, the average sailing speed for a pleasure yacht is 6-12 knots (11-22kmh).

The AC75 yachts can be easily seen from an elevated vantage point, against a backdrop of wind-ruffled water, as they tack and gybe up and down a course.

The America’s Cup challenges have been key to Auckland reclaiming its waterfront for public use and exploiting its natural coastal setting for spectator advantage. 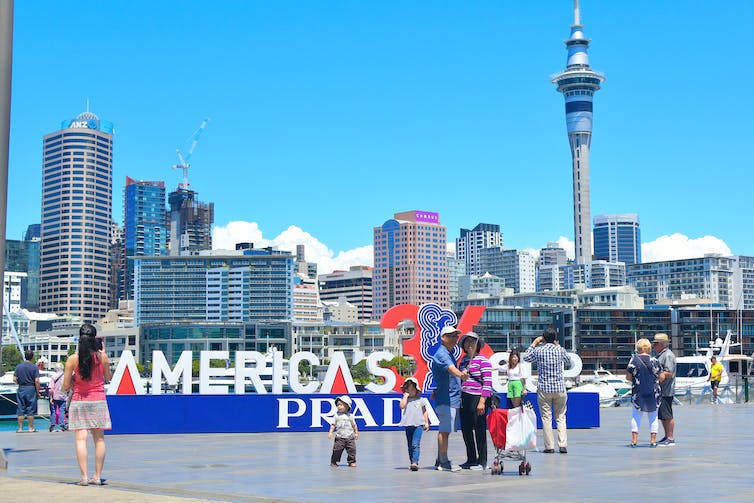 An urban harbour arena such as the Waitematā is the perfect venue, as it maximises sport, spectacle, super-scaled and super-funded vessels, land enclosure, security, public participation and controversy.

The race village has become the onshore site for entertainment and celebration. It is a formula future organisers would do well to emulate if they can capitalise on the right urban infrastructure and captivating landscapes.