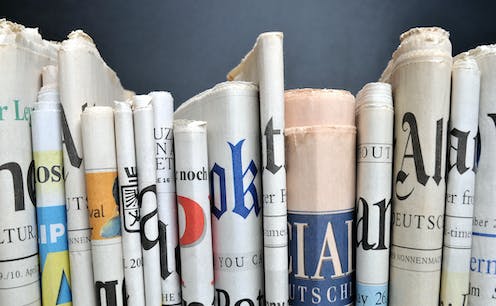 Its paywall is the first for a general newspaper in New Zealand.

Back in 2011, the NZ Herald’s parent company APN (now NZME) launched a digital-first initiative which was deemed critical[2] for its future digital revenue. As a part of that initiative, APN was considering digital subscriptions for the NZ Herald.

Eight years later, this future imagined by APN bosses has arrived and will affect other players in New Zealand media.

The National Business Review, a business newspaper, has charged its readers since 2009, and digital news outlet Newsroom already charges for its premium content.

The New Zealand portfolio of Stuff, which is now owned by Australian Nine, includes digital news site Stuff, print newspapers and the community site Neighbourly. Stuff has no paywall, but the NZ Herald’s move to paid online content raises the question of whether it will follow its competitor. My bet is that a similar move is unlikely.

Stuff has built its revenue model on e-commerce activities and is now selling broadband access, electricity and health insurance among other things.

For years, NZME and Fairfax Fairfax NZ (now part of Nine) avoided charges for their digital news content because of their duopoly in the New Zealand print and online news markets. The two companies feared that if one of them would introduce paid content, the other one would reap the benefits and gain in traffic.

On the other hand, traffic is perhaps not the main concern of the NZ Herald as it is targeting to convert a proportion of its audience to paid readers. For the first year, its aim is modest. It is aiming to gain 10,000 digital subscriptions.

To put the current situation into context, in 2018 Stuff had a unique audience of 2.1 million[4] and the NZ Herald 1.7 million. According to SimilarWeb[5] data, in the first quarter of 2019, Stuff had 34 million monthly visits compared to the NZ Herald’s 27 million.

For several years, NZME and Stuff pursued a proposal to merge. But when ruling against the merger[6] in 2017, the Commerce Commission[7] observed:

Both NZME and Fairfax have currently decided against introducing some form of paywall primarily because of the threat of readers switching to their competing online news websites and the risk of putting advertising revenue at risk.

That risk still exists, and it will be interesting to see whether Stuff gains in audience, traffic and advertising now that the NZ Herald paywall is going up.

The Commerce Commission was also concerned that if the merger had gone through, the combined company would introduce a more expensive paywall. As the merger was denied, this worry does not apply. But we don’t know how restrictive or pricey a joint paywall would have been.

The NZ Herald paid content model is a freemium model. It allows readers free access to some content, but the premium content such as business news will be behind a paywall. It is also a very bundled model as the paper promises paid readers syndicated material from the New York Times, the Financial Times, The Times and Harvard Business Review, to name a few.

At this point it is not clear how much and what content exactly this large syndicate offers for the NZ Herald readers, but clearly the deal does not include full access to these sites.

While our major focus is on the delivery of the very best New Zealand journalism, we know that the addition of these four publishers, alongside the likes of the Washington Post and The Daily Telegraph will make for a terrific, unrivalled package of journalism and content.

As indicated in the table below, the annual digital subscription to the NZ Herald’s will cost NZ$199, compared to The Age’s and The Sydney Morning Herald’s NZ$294. Compared to prices of The New York Times (US) and The Telegraph (UK) it is cheaper, but compared to Le Monde (France) it is substantially more expensive.

It remains to be seen how much of the NZ Herald’s content will be behind a paywall and how much will continue to be freely accessible. Interestingly, academic studies[9] of paywalled content have found that paywalled newspapers offer news sourced from newswires and syndicates for free whereas the most valuable content such as hard news, financial news, politics and opinion pieces have been hidden behind a paywall.

Alexander says the paper invests especially in business coverage, and it aims to be “the go-to destination for specialist, insightful and essential business journalism”.

The National Business Review and Newsroom Pro are competing in the same market, and they already have paid content strategies in place. I do wonder if the New Zealand market is really big enough for three players focusing and charging for business content.

One major decision is where to draw the line between free versus paid content. In France, Le Monde paywalls roughly 37% of its content, so readers have free access to the majority of its articles. According to Digiday[10], the paper found that putting more than 40% of its content behind a paywall had a negative impact[11] on the potential of gaining new subscribers. When the paper reduced the number of its paid articles last November, its traffic rose from 84 million to 97 million in a month, increasing its pool of potential subscribers.

Getting the balance rights seems to matter.