The idea of the living wage is back on the political agenda. In the United States the Democrats are proposing to double the federal minimum wage[1]. In Australia the federal Labor Party has promised to deliver a living wage.

“A living wage should make sure people earn enough to make ends meet, and be informed by what it costs to live in Australia today – to pay for housing, for food, for utilities, to pay for a basic phone and data plan,” Opposition leader Bill Shorten said this week[2].

The principle of the living wage is the subject of my book published in January[3]. To write the book I spent five years researching working conditions in countries including Australia, Bulgaria, Cambodia, India and Thailand.

What my research underlines is that there are limits to thinking about a living wage for Australian workers without also making the principle global.

Australia first embraced the living wage more than a century ago in what is arguably the nation’s most famous labour law case. The Harvester Judgement of 1907 defined a living wage as “fair and reasonable” payment sufficient for an unskilled worker to support a family in reasonable comfort.

Read more: Explainer: what exactly is a living wage?[5]

Twelve years later the principle was enshrined in international labour law, when the International Labour Organisation was established in 1919. It defined a living wage as one “adequate to maintain a reasonable standard of life as this is understood in their time and country”.

A century on, Australia’s industrial relations system has long abandoned the central premise of the living wage. Around the world being paid enough to live on remains elusive. We are all intimately connected to many of these workers. They have assembled the phones we handle. They have sewn our clothes. 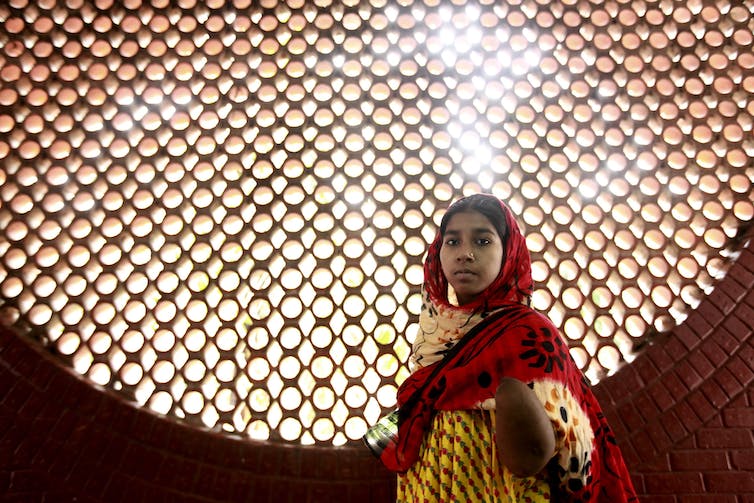 Bangladeshi garment worker Marium lost her left arm when an eight-storey building in Dhaka collapsed in April 2012. A reported 1,134 workers died in the tragedy. Abir Abdullah/EPA

Women in Bangladesh who make clothes for brands such as Big W, Kmart, Target and Cotton On earn as little as 51 cents an hour, according to an Oxfam report[6] published last month.

The report is based on interview with 470 garment workers in Bangladesh and Vietnam. Three-quarters of the Vietnam workers and all of the Bangladeshi workers earned less than a living wage (as calculated by the Global Living Wage Coalition[7]).

Read more: It would cost you 20 cents more per T-shirt to pay an Indian worker a living wage[8]

It is very hard for workers to mobilise for higher wages in many countries around the world. In January 5,000 garment workers in Bangladesh were sacked [9] after going on strike for higher wages. During protests, police shot dead one worker[10]. More than 50 others were injured. Striking garment workers in Cambodia have also been shot dead by police[11] during protests. 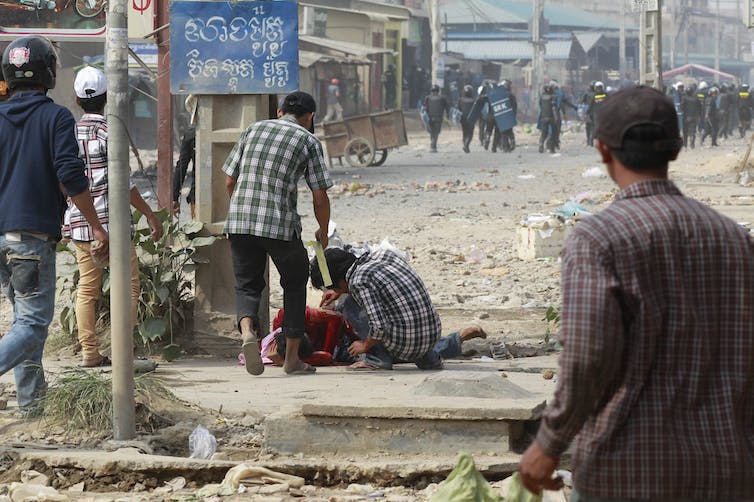 Especially in price-sensitive industries, globalisation exerts strong pressure on governments to keep minimum wages low, lest any increase lead to “capital flight”. This competition pits countries in a race to the bottom.

Should labour costs go up in Bangladesh, for example, its government fears garment brands moving production to, say, Ethiopia. It’s a legitimate fear; in my 15 years of research I’ve seen whole garment factories dismantled and trucked across borders to countries where the labour is cheaper.

Cooperation is the answer

The obvious solution would be for countries to cooperate and raise minimum wages collectively and incrementally (at an agreed percentage every year). This approach would help overcome “first mover risk”. Business would have less incentive to look for cheaper labour elsewhere.

For this to occur would, of course, require huge amounts of international political good will. Nation states would need to put aside the tendency to think in terms of immediate self-interest and work cooperatively for mutual benefit.

Here we face a problem with the architecture of international law in general, and labour law in particular.

Though the principle of a living wage was enshrined in the treaty that formed the International Labour Organisation, it is not codified in any of the eight fundamental international labour conventions[12]. These cover forced labour, child labour, workplace discrimination and the right to unionise.

But even if it was, that wouldn’t necessarily make much difference. International law isn’t the same as national law. Most international treaties, conventions and agreements are not enforceable. There is no real penalty for any country that refuses to sign, nor for any signatory failing to meet its obligations. The ILO cannot enforce targets in the way needed to address a problem this big.

However, there is one area of international law that comes close to what we usually think of as law: international trade and investment law.

In addressing goals like reducing tariffs, countries faced similar coordination problems. Beginning with the General Agreement on Tariffs and Trade[13], which came into effect in 1948, half a dozen major multilateral trade deals were negotiated before the agreement in 1994 to establish the World Trade Organisation.

The WTO has since adjudicated hundreds of disputes in which one nation has accused another of failing to meet its WTO commitments. Investors can also take states to tribunals[14] to seek compensation for unfair behaviour. States take these tribunals very seriously.

Why not emulate this architecture of international trade law for living wages?

Concrete targets for raising wages could be set through multilateral agreements. Countries would increase wages incrementally, by a certain percent each year, in a coordinated fashion, until they reached a living wage level.

An international tribunal would hear claims against states accused of failing to raise or enforce minimum wages as agreed. National tribunals would adjudicate cases involving corporations.

Cambodian garment workers, for example, would be able to take their government to the international tribunal for failing to raise wages or enforce minimum wage laws. A state held liable to pay compensation for wage breaches could pursue factory owners or their international buyers through national tribunals. This would be an incentive for states to police their own labour laws.

Instead of having separate national conversations about living wages, now is a good time to start the conversation at a global scale.