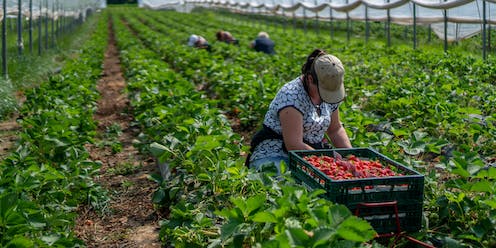 The Fair Work Commission’s ruling that Australian farm workers paid piece rates to pick fruit and vegetables must now get a base wage of $25.41 an hour is long overdue and absolutely necessary.

In theory, anyone working in Australia should be paid a minimum wage. But piecework payments, by which workers are paid solely on what they produce with no guarantee of a minimum rate, have lingered on as a common practice in the agricultural sector.

Piecework arrangements needn’t be exploitative. It depends on the rates – whether they’re enough to make a living in a bad season, when fruit is scarce. By law, they should be. In practice they haven’t been. The Fair Work Commission has acknowledged and sought to address this. It’s about time.

Underpayment is an open secret

The Horticulture Award, which covers farm fruit and vegetable pickers, does set minimum weekly and hourly rates. But it also permits full-time, part-time or casual employees to make a piece-rate agreement with their employee.

Such agreements must be entered into “without coercion or duress”, and the agreed rate is meant to “enable the average competent employee to earn at least 15% more per hour than the minimum hourly rate” set in the award.

This has not been the reality for many.

In 2017 the National Temporary Migrant Work Survey[3] found wage theft common for migrant workers. Of 4,322 participants in the survey, 46% earned no more than $15 an hour, while 30% earned $12 a hour or less. Wage theft was prevalent across a range of industries, but the worst paid jobs were in farm work. Of the migrants working as fruit and vegetable pickers, 31% earned $10 per hour or less, while 15% earned $5 an hour or less.

Numerous studies have found wage theft rife in the horticultural sector, with piece rates being the most common means for underpay workers. Shutterstock

A 2019 study by Unions NSW and the Migrant Worker Centre[4] in Victoria found similarly grim results. Of 1,300 migrant workers surveyed, 78% reported being underpaid at some point, and 34% on piece rates had never signed an agreement. The lowest piece rates reported were from grape and zucchini farms, where respondents reported earning as little as $9 a day.

Just ask any backpacker working in the sector if they know anyone who has been ripped off. It’s not exactly a secret. I’ve picked fruit myself and experienced it firsthand.

It is worth noting that not all migrant farm workers have been equally vulnerable.

The Seasonal Worker Program, for workers from nine Pacific nations and Timor Leste, has been more tightly regulated, and generally successful in avoiding the sort of exploitation described above. In 2019 this program offered about 12,000 visas. Stephen Howes of the Development Policy Centre[5] has argued the program could be expanded to more than 100,000 places[6].

Read more: Why closing our borders to foreign workers could see fruit and vegetable prices spike[7]

Far more vulnerable to exploitation have been those on the more laissez-faire Working Holiday Maker Scheme – better known as the backpackers’ visa. This visa requires 88 days of farm work to stay in Australia for a year, and a further 180 days to stay for a second year. The evidence is that many accept being underpaid for those periods as a cost of staying in Australia.

Newly arrived Australian residents, particularly refugees, are also at risk, due to unfamiliarity with working rights and entitlements.

If piece rates are set at a fair level, and the agreement is truly voluntary, such payment can be win-win – good for the farmer and an opportunity for a motivated worker to earn better money than just working for a flat minimum rate.

A lot of my career has involved working abroad in places where the poor and unconnected have no hope of getting ahead. Researching on Australian agriculture I’ve often been touched by the stories I’ve heard of experienced pickers, who plan to keep picking to save enough money to buy land of their own. They tend to be fierce and hard-working. You don’t want to get between them and the good fruit.

Earning more than the Horticulture Award’s minimum rates through a piece-rate agreement does happen, but it is the exception rather than the norm. Shutterstock

But not everyone is an experienced picker able to look out for their own interests. That is why a base rate is essential.

The problem with the piecemeal rate provisions in the the Horticulture Award was that clause 15.2(i) stated:

Nothing in this award guarantees an employee on a piecework rate will earn at least the minimum ordinary time weekly rate or hourly rate in this award for the type of employment and the classification level of the employee, as the employee’s earnings are contingent on their productivity.

The Australian Workers Union applied in December 2020 to have this clause struck out and replaced with a provision setting a minimum hourly rate for piecework. This application was supported by the United Workers’ Union, the Australian Council of Social Service, and the state governments of Queensland, Victoria and Western Australia.

Read more: How migrant workers are critical to the future of Australia's agricultural industry[9]

In its decision on October 3[10], the Fair Work Commission said while some pieceworkers earn significantly more than the target rate for the “average competent employee”, the totality of the evidence “presents a picture of significant underpayment of pieceworkers”.

The best way to look at this is the Fair Work Commission closing a loophole.

It was already the responsibility of employers to pay piece rates high enough to allow competent workers make 15% more the minimum wage. Rather than thinking of this ruling as imposing an “extra cost” on farmers, it should been seen as putting in place a mechanism to ensure compliance with law.

A base rate takes the prospect of vulnerable workers getting paid $3 an hour off the table. That’s not asking for a lot.