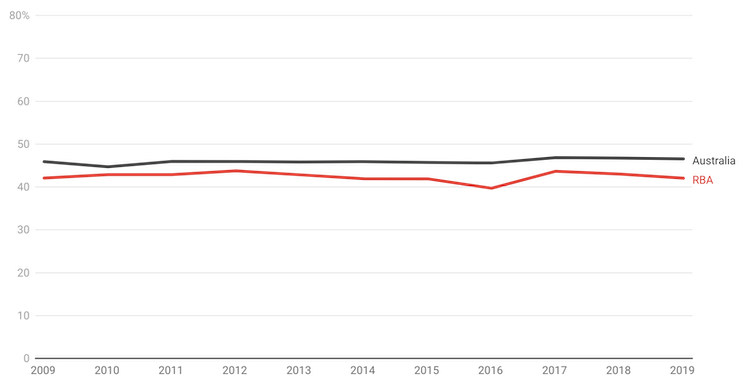 The Reserve Bank of Australia was roiled today by the resignation of its Deputy Governor Guy Debelle, who is leaving with only six days’ notice[1].

Dr Debelle said that he was resigning to become chief financial officer of Andrew Forrest’s Fortescue Future Industries[2], a company investing in zero-emission technologies such as green hydrogen.

The move came as a surprise given that, as deputy, Guy Debelle was long seen as the heir apparent to Reserve Bank Governor Philip Lowe, whose term expires in September next year.

He is recognised around the globe, from the halls of Massachusetts Institute of Technology where he has been a visiting professor, to the world of central banking, where he chaired several international committees.

What made Guy go?

Why then did Debelle jump ship? As deputy governor he has shown a keen interest in the transition to a net-zero economy, giving several speeches on how the move will affect Australia’s economy[4] and its financial system[5].

But as recently as last month it seemed that he was still hoping to be given the keys to the Reserve Bank vault in Sydney’s Martin Place, testifying[6] to parliament that he didn’t own any financial assets in order to minimise perceived conflicts of interest.

However, notwithstanding his interest in the zero-emission transition, it seems that his decision to leave was in part because his status as governor-in-waiting was no longer a sure bet.

The Reserve Bank has faced criticism for missing its inflation target[7] five years in a row and for “group-think[8]” – an unwillingness to pay attention to outside ideas.

Regardless of who wins the next federal election, both sides of politics[9] have promised an inquiry into the bank to investigate why it made such an apparent error and what needs to change to make sure it doesn’t happen again.

Given its apparent failure, it is possible that the Treasury and its political masters felt that another internal appointment would be inappropriate and that the next governor should be appointed from outside to shake things up.

Guy Debelle might also have seen writing on the wall about gender diversity.

The bank has not had a female governor in the 100 or more years since it printed its first banknote.

While the RBA has made a concerted effort[11] in recent years to encourage greater diversity within its workforce, compared to the rest of Australia it remains male, pale and stale – particularly at the higher levels.

Percentage of total at 30 June, RBA versus Australian workforce. Reserve Bank of Australia

In this respect the Reserve Bank is behind the times. Appointing Guy Debelle governor would have kept it there for perhaps another decade.

Who will inherit the throne?

All eyes will now turn to who will be appointed deputy governor in Debelle’s place - and potentially next governor of the Reserve Bank.

If Treasurer Josh Frydenberg wants to keep a degree of continuity, he might well choose one of the assistant governors. The two most likely are Dr Luci Ellis and Dr Chris Kent, who together oversee the bank’s monthly policy process as the heads of the economic and financial markets groups respectively.

Alternatively, Frydenberg may choose to inject some new blood ahead of the post-election review.

Each has worked at the Reserve Bank and each has an outsider’s perspective.

One thing that’s clear is that an orderly coronation has been thrown in the bin.

With a review looming on the horizon and a change in government likely, the deputy governorship may well be a poisoned chalice – an impossible task with little time to learn on the job.

The only certainty at the bank is turbulent times ahead.