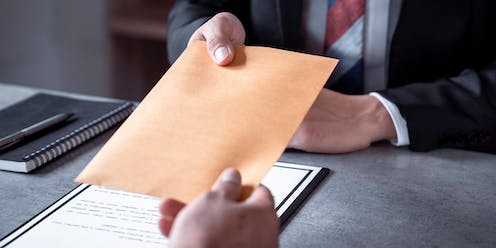 The Australian government has decided not to establish a federal anti-corruption watchdog this parliamentary term, despite a promise in December 2018[1] to deliver an integrity commission

with teeth, resources and proper processes that will protect the integrity of Australia’s Commonwealth public administration

In the three years since that promise was made, Australia has slipped[2] further down the international corruption league tables.

On the respected Corruption Perceptions Index compiled by Transparency International[3], it is now in 18th position, down from 13th in 2018.

A decade ago Australia was seventh.

This 12-point drop is, along with Hungary’s fall from 55 to 43[4], equal worst among the 38 nations in the OECD – the economies with institutions and cultures most comparable to Australia.

New Zealand, by comparison, has consistently been in the top three, with scores between 88 and 91.

CC BY[5] Does Australia’s decline in this index really matter? Its score is, after all, still comparatively high, and the Corruption Perceptions Index is only a proxy measure of corruption. Yes, it does. Dozens of studies have demonstrated the corrosive economic effect of corruption, and perceptions are almost as important as reality in guiding economic decisions. Read more: Australia and Norway were once tied in global anti-corruption rankings. Now, we're heading in opposite directions[6] Based on studies correlating corruption indices with economic impacts, I estimate the difference between Australia’s 2012 and 2021 ratings equates to 0.6% lower economic growth. This translates to about 60,000 extra new jobs and an extra A$10 billion in government revenue a year. The value of measuring perceptions Because corruption is hard to measure – not least because it’s generally illegal – the Corruption Perceptions Index[7] does the next best thing. Measuring perceptions is useful, particularly when considering economic impacts. Perceptions are critical in investment decisions – whether it be a major corporation investing in a billion-dollar project, a small business borrowing money to expand, or an individual taking on a debt to get a university degree. Any impression a system is “rigged”, and that “who you know” is more important than how hard or smart you work, acts as a disincentive against taking risks. Read more: It's the luxuries that give it away. To fight corruption, follow the goods[8] The Corruption Perceptions Index’s credentials are strengthened by it being a survey of expert surveys, drawing on 13 different data sources from 12 authoritative institutions. These include the World Economic Forum’s Executive Opinion Survey[9], the World Justice Project’s Rule of Law Index[10], the Economist Intelligence Unit’s Country Risk Ratings[11] and the World Bank’s Policy and Institutional Assessment[12].

In June 2021 an open letter to Prime Minister Scott Morrison signed by 59 former judges, lawyers and ‘eminent Australians’ called for the urgent establishment of a National Integrity Commission, as promised in 2018. Mick Tsikas The index is focused on public-sector corruption – from misusing public institutions for private or political gain to outright fraud and bribery. Many of its sources also incorporate perceptions of broader corruption. According to a 2018 World Bank[13] review of eight major corruption measures, this “composite methodology” makes the Corruption Perceptions Index the most valid measure of the magnitude of overall corruption in many countries. Calculating economic impacts To estimate the economic impact of Australia’s falling score, I’ve drawn on the extensive body of economic research done over the past 30 years quantifying the impact of corruption on economic growth. A useful overview of these many studies came from a 2011 meta-analysis for the United Kingdom government by University of London economists Mehmet Ugur and Nandini Dasgupta[14]. They sorted through more than 1,000 papers, analysing 115 of those studies in detail to calculate concrete numbers for the relationship between corruption index scores and economic performance. Read more: Equality: our secret weapon to fight corruption[15] They created a six-point corruption scale from “0” (very corrupt) to “6”. Every one-point change on this six-point scale, they calculated, increased or reduced per capita economic growth by, on average, 0.86% a year. Each one-point change on their scale equals a 17-point change on the Corruption Perceptions Index 100-point scale, meaning Australia’s 12-point decline suggests 0.6% less income per capita. What this means for Australia It suggests that if Australia had the same Corruption Perceptions Index score as in 2012, therefore, it would enjoy GDP per capita growth of 2.2% over the next few years instead of Treasury’s forecast 1.6%[16]. In terms of jobs, the Treasury forecasts 1.6%[17] annual growth between 2022 to 2025 – about an extra 200,000 jobs per year. An extra 0.5% would lift that growth by 60,000 jobs per year. The calculations are necessarily rough. International averages don’t automatically translate to a specific nation’s circumstances. However, Ugur and Dasgupta’s study finds higher economic effects apply in wealthier countries, meaning applying the average effect to Australia might produce an underestimate. The result is also broadly consistent with an International Monetary Fund study, published in 2016[18] linking a 22-point improvement on the Corruption Perceptions Index to a tax revenue increase equal to 0.88% of GDP. Applying this to Australia’s performance would suggest its 12-point decline is costing government revenue some 0.5% of GDP - that’s $10 billion - a year. Perceptions of corruption do matter. These results suggest they go well beyond integrity and good governance. Simply put, an effective integrity commission and other steps tackling corruption are both sensible economic management and good budget repair. References^ in December 2018 (www.pm.gov.au)^ has slipped (theconversation.com)^ Transparency International (www.transparency.org)^ from 55 to 43 (www.economist.com)^ CC BY (creativecommons.org)^ Australia and Norway were once tied in global anti-corruption rankings. Now, we're heading in opposite directions (theconversation.com)^ Corruption Perceptions Index (www.transparency.org)^ It's the luxuries that give it away. To fight corruption, follow the goods (theconversation.com)^ Executive Opinion Survey (www.weforum.org)^ Rule of Law Index (worldjusticeproject.org)^ Country Risk Ratings (www.eiu.com)^ Policy and Institutional Assessment (databank.worldbank.org)^ World Bank (openknowledge.worldbank.org)^ Mehmet Ugur and Nandini Dasgupta (eppi.ioe.ac.uk)^ Equality: our secret weapon to fight corruption (theconversation.com)^ 1.6% (budget.gov.au)^ 1.6% (budget.gov.au)^ published in 2016 (www.imf.org)Authors: Tony Ward, Fellow in Historical Studies, The University of Melbourne