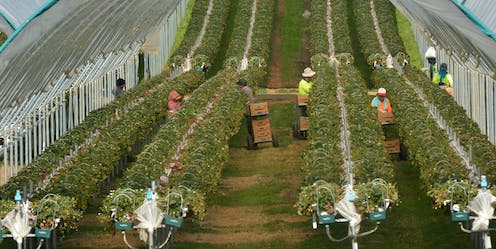 The Australian government has announced a major change to its arrangements for migrant workers from Pacific Island nations (and Timor-Leste), replacing two existing temporary visa schemes with a single scheme, to be known as the Pacific Australia Labour Mobility[1] (PALM) scheme.

The consolidated scheme will come into effect in April 2022. It will replace the Seasonal Worker Programme, which has provided visas of six to nine months’ duration to meet employer needs for “unskilled” labour, mostly in farm harvesting work, and the Pacific Labour Scheme, which has provided visas of one to three years for “low-skilled” and “semi-skilled” workers in rural and regional areas.

The consolidation, announced today[2], comes at time when farmers are crying out for more workers while industry and government are under pressure to address structural issues in the existing schemes that have enabled worker mistreatment and wage theft.

The PALM scheme seems partly designed to respond to these criticisms. The press release issued[3] by foreign minister Marise Payne and minister for the Pacific Zed Seselja contains vaguely framed assurances of “enhanced worker protections”, including a “compliance and assurance program” (details unknown).

But much clearer is how the scheme will address long-running employer concerns about the existing schemes, by cutting down the paper work and requirements to show they have been unable to fill positions with local workers before applying to recruit migrant workers.

“Flexibility” is the buzzword here – though more for employers than workers.

Back in 2017, pre-pandemic, I sat in a forum hosted by a labour hire agency in the middle of a picking season in north-central Victoria. Speaking to room full of farmers, the agency’s representative talked about how backpackers would leave farms if they weren’t getting paid enough. “This is a challenge”, the representative said. The farmers nodded in agreement.

Farmers I’ve interviewed then and since describe their frustrations with spending days getting a group of workers up to speed, only to have them leave.

This is one reason employers like the Seasonal Worker Programme, which ties the visa holder to the sponsoring employer (typically a labour hire agency). As a packing-shed manager put it:

We can get a group of staff and know that they can’t actually go and work anywhere else.

For workers though, this tying of visas to a particular employer[4] has been one of the key problems with the existing Pacific worker visa schemes. It limits workers’ ability to complain about exploitative treatment or to leave and find more favourable work.

While the details of the new scheme are sparse, it seems the PALM scheme won’t substantially change this control mechanism.

The “labour mobility” being delivered is not the worker’s choice, but movement between employers “in response to workforce demand”.

That is, where employers struggle to provide the minimum average of 30 hours of work a week required, they (or more likely, the labour hire agencies managing their workforce) will be able to move workers between employers.

This kind of increased flexibility has already been instituted under pandemic revisions to the Seasonal Worker Programme rules. Worker “consent” will be required for these moves, but this is hardly the same as allowing workers the capacity to instigate changes of employers themselves.

Thus, while the changes will likely yield some improvements for workers – through reducing situations in which they remain stuck with farmers who have run out of enough work for them – they won’t address the fundamental power disparity embedded in these schemes.

Employers like the way the Seasonal Worker Programme ties the visa holder to the sponsoring employer (typically a labour hire agency). Shutterstock

Another change with PALM will be the capacity for seasonal workers to apply for longer-term visas – up to four years. This too sounds promising. But the framing of the changes again suggests the balance of power will remain firmly with employers.

Workers will be able to apply for these longer-term visas only once they are Australia, and only if recommended by their employers. This will replicate the vulnerability in the existing schemes, by which workers’ chances of staying in the country or qualifying for a future visa are often contingent on the whims of their employer. It’s a powerful disincentive against complaint.

Read more: If Australia cares about Pacific nations, we should also invest in their care givers[6]

Still a recipe for precarious work

Strengthening worker protections would involve giving workers increased control over the conditions of their labour, and rights not contingent on their employer’s approval.

So what are the strengthened protections for workers under the new scheme? There is little detail beyond generalised references to “welfare and cultural expertise”, “community connections” and “maintaining the paramount importance of worker wellbeing”.

The most concrete change described is establishing a “24/7 helpline” for migrant workers. Exactly what help this will provide remains unclear. A helpline might assist workers facing illegal exploitation. It won’t help much with the unfairness produced by the system working exactly as intended.

With so little detail, the full implications of the new scheme are impossible to gauge. At this point, notwithstanding some nods to worker protection, it looks to be largely a continuation of established patterns, with intensified “flexibility” for industry – a recipe for precarious employment.