On May 29, the government announced by way of media release[1] the extension of an emergency COVID measure.

The temporary halving of minimum drawdown rates for retirement superannuation accounts — introduced in March 2020[2] while the Australian stock market was in freefall — would continue for another year.

The explanation was terse and does not stand up to scrutiny.

The biggest beneficiaries of the extension are the wealthy retirees, who use super to escape tax on funds they are building up to hand on to their children.

It provides no benefits to less well-off retirees who need to use money in super to live on in retirement. 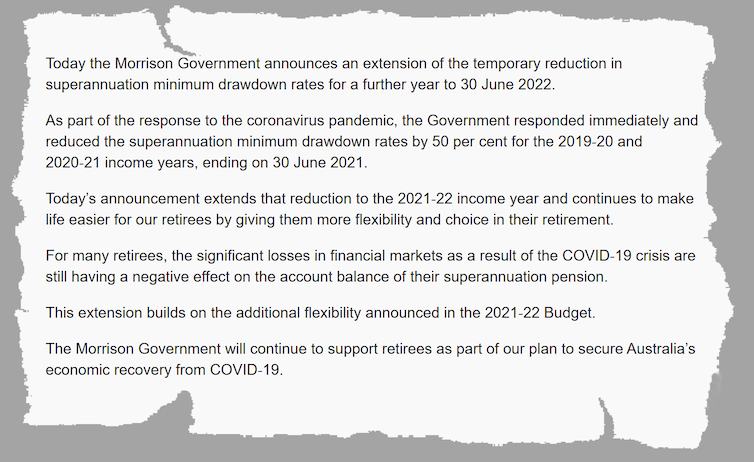 Before the temporary halving of drawdown requirements in March 2020, a retiree aged between 65-74 would be required to withdraw at least 5% of their account balance each year. The minimum withdrawal rate increased with age. The merit in the requirement (even if the numbers used have an unavoidable element of arbitrariness) was that it limited the ability of wealthy retirees to use super as a pure tax dodge. Super is meant to be for retirement Funds in super retirement accounts have a zero tax rate on earnings and are untaxed when withdrawn. The original decision in March 2020 to halve minimum withdrawals possibly made some sense. Following a peak on February 20 2020, stock markets plunged and super funds suffered negative returns (minus 10.3%[3] in the March quarter, according to the Australian Prudential Regulation Authority). Read more: Retirement incomes review finds problems more super won't solve[4] Withdrawing funds, possibly not currently needed, from a tax-preferred portfolio at a time when its value was (hopefully temporarily) depressed was not an optimal wealth management strategy. Those sufficiently well-off and able to draw on assets outside super, could now draw down less in order to maximise super tax benefits. The less well-off (without significant financial assets outside of super) got no such benefit. They still needed to draw down at a similar rate for living expenses, or cut back consumption. There are possibly some (probably not many), between these two groups, for whom the policy change meant improved whole-of-retirement living standards given the subsequent recovery in super fund returns. And the announcement may have had some beneficial psychological effects! So, it was possible to give the original decision a tick of approval. The S&P/ASX 200 has more than recovered from last year’s crisis

S&P Global[5] But what about the decision to extend the halving of minimum withdrawal rates for another entire financial year? The explanation[6] in the media release is little more than unsubstantiated waffle. Today’s announcement extends that reduction to the 2021-22 income year and continues to make life easier for our retirees by giving them more flexibility and choice in their retirement. For many retirees, the significant losses in financial markets as a result of the COVID-19 crisis are still having a negative effect on the account balance of their superannuation pension. The second sentence certainly warrants scrutiny. APRA statistics show that in the year to March 2021 the rate of return for institutional super funds was 18.2% This is well in excess of what was required to reverse the temporary loss in the March quarter of 2020 that prompted the original decision. These APRA statistics for March 2021 were published on May 25. The information underlying them was presumably available to the government well before its announcement on May 29. Superannuation performance (excluding self-managed funds)

APRA Quarterly superannuation performance statistics, March 2021, Table 1C[7] The APRA figures are aggregates. There might be some individual funds that have not recovered from the losses of a year earlier, but each of the categories of institutional funds in the APRA statistics appear to have done so. The APRA statistics do not include self-managed funds, and some of them might not have fully recovered (we don’t know). But even if so, that would reflect decisions about asset allocations in the control of the fund members. This means the second sentence of the explanation reproduced above is at best unproven, and likely wrong. The first sentence is, of course, tautologically true. The extension will indeed give retirees more flexibility in their retirement. Super as a tax dodge But the rationale for the drawdown requirement was to limit the use of super as a wealth maximisation strategy for the benefit of heirs. The purpose of super is meant to be to provide income security and a reasonable standard of living in retirement. Read more: Home ownership and super are far more entwined than you might think[8] That’s what the 200-page report of the retirement income review commissioned by Treasurer Josh Frydenberg told him in November. The key beneficiaries of the extension will be the well-off who already get the most benefit from Australia’s super system. Retirees who need super to live on won’t benefit in the least.