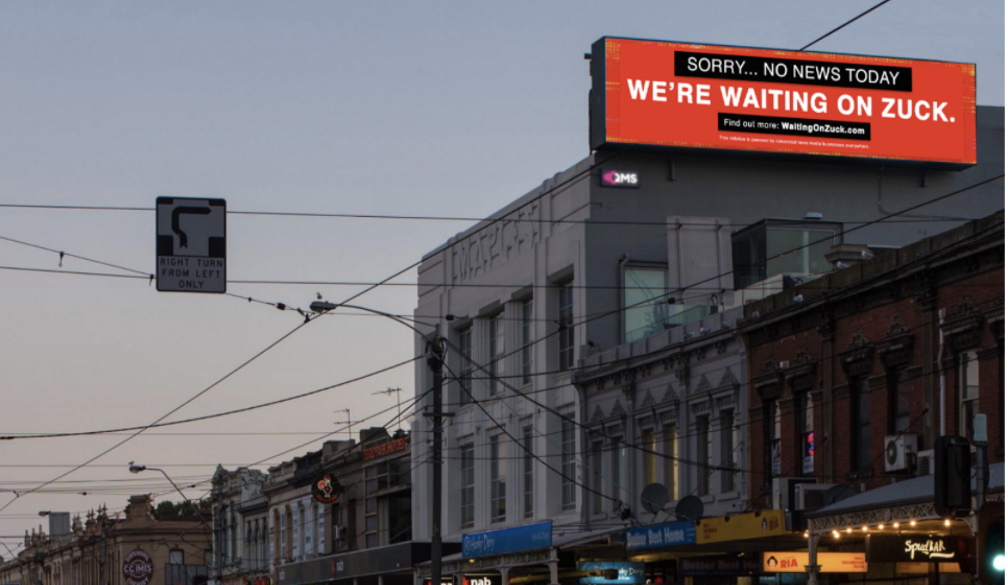 In Australia, over 30 media outlets will stop publishing news for 24 hours in a collective freeze to fight for the future of Australian news media. The news freeze will let the world know that small and medium news publishers are #WaitingOnZuck to pay for journalism and content that appears on the Facebook platform.

The independent news outlets, including Broadsheet, Pro Bono Australia, Concrete Playground, Urban List, City Hub, Star Observer, Australian Jewish News, and Australian Chinese Daily, will freeze their news feed for the day and replace it with a direct message for Meta CEO, Mark Zuckerberg. Others who are not able to freeze due to existing obligations and agreements will show their support in the form of campaign ad’s and editorial pieces.

These publishers - Australia's small and medium news businesses - and their millions of readers are currently waiting on Zuckerberg (and his businesses), to come to the negotiating table and make commercial deals that are transparent, fair, and pay for quality independent journalism. The news freeze warns of a future without independent news if publishers don't get a fair deal and a level playing field.

The #WaitingOnZuck campaign encourages Australians to get involved by downloading their own #WaitingOnZuck action kit via www.WaitingOnZuck.com and show their support via their own social channels. They can also email Josh Frydenberg via the campaign website and let him know that Mark Zuckerberg will continue to erode the Australian news media landscape without greater accountability for Facebook (Meta) to negotiate with independent publishers.

Twelve months ago, the Australian Federal Government passed the News Media Bargaining Code into law, led by Federal Treasurer Josh Frydenberg. This Code aims to reduce the imbalance between Australian news media businesses and digital platforms, specifically Facebook and Google. Under the Code, the digital platforms are legislated into commercial negotiations with local media companies. Facebook has negotiated deals directly with the large media networks; however, they have failed to negotiate with most of Australia's independent publishers. The unintended consequence is that independent news businesses, without an agreement, are at a significant competitive disadvantage, and their futures are at real risk.

This world-leading Code has been a significant step in the right direction. However, the Code doesn't go far enough in ensuring that all media news outlets, regardless of size, are paid for their journalism and content. The sustainability of independent news is a critical issue for Australians. Independent publishers deliver essential news and information and form part of the backbone of communities by celebrating diversity, shining a light on local heroes, nurturing our unique interests, and sharing the stories that help us feel seen, heard, and represented in Australia.

Karen Mahlab AM, Founder and CEO of Pro Bono Australia, said, “The purpose of the Media Bargaining Code was to support public interest journalism. I don’t believe its purpose is being met when small to medium sized publications who represent a huge diversity of opinions and views are left out of the equation.”

Federal Treasurer Josh Frydenberg (and the Department of Treasury) is currently reviewing the impact and effectiveness of the Code. The Code requires designated tech platforms to strike commercial deals with Australian publishers; however, Facebook and Google have not been designated. As part of the review, designation is being seriously considered for both platforms. Now is the time to ensure that the Code holds Facebook to account and helps build a sustainable news industry that is independent, diverse, and representative of all Australians.

Nick Shelton, Founder and Publisher of Broadsheet Media, said, "The unintended consequences of how this code has been handled is that independent publishers face unprecedented competition from our publishing colleagues who have struck deals. With millions and millions of dollars now being spent on talent, marketing, technology and audience acquisition, independents are finding it impossible to compete.

“Facebook and Google are in a position to pick the winners and losers in Australian media, which is something the Australian public should be very worried about. The only way for independent media to survive is to designate the platforms.”

The #WaitingOnZuck campaign was created by D.O.A, which stands for Decade of Action - a consultancy focused on social purpose, led by Ebony Gaylor.