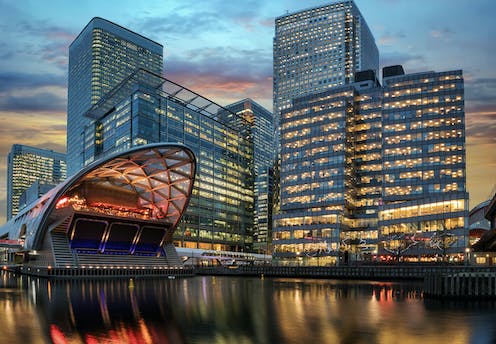 At a time of rising prices and an ever increasing cost of living, there are at last signs of a financial boost for an industry toiling away at the economic coal face. British bankers, it seems, could be about to receive a hefty pay rise, with the new UK chancellor reportedly planning to scrap[1] the limit on how much they receive in bonuses.

The cap was introduced as part of efforts to improve regulation of the banking sector in the wake of the financial crisis[2] of 2008. That crisis sparked the first British bank run[3] for 150 years and led to the UK government spending billions of pounds[4] of taxpayers’ money bailing out failed banks.

In many countries, unemployment spiked[5] and household wealth evaporated[6]. The crisis had long-term negative effects on global economic growth, income inequality[7] and, some have argued, political stability[8].

As a result, authorities introduced extensive reforms to banking and financial regulation, seeking to avoid a repeat of this economic catastrophe. One key problem to solve was the banking industry’s desire to maximise short-term profit, where risk-taking was rewarded with extremely generous pay packages. The bonus cap was introduced by the European Union[9] in 2014 – when the UK was a member – to curb such pay mechanisms triggering reckless and risky behaviour.

At the time, the bonus cap was criticised[10] by the then Conservative UK chancellor George Osborne as having a “perverse effect”. Eight years on, the new prime minister Liz Truss and her chancellor Kwasi Kwarteng, appear to see scrapping the cap as a key part of their “pro-growth” post-Brexit agenda.

They will argue that such a move will lure the best talent to the UK’s financial industry, helping London in particular to become the attractive and competitive hub it once was. US banks in particular, reportedly find it challenging to employ staff in London[11] because of the cap.

Kwarteng will probably say that highly paid finance professionals help to boost the national economy, with more tax paid on bigger bonuses. British banks such as Barclays and HSBC would also benefit in their international operations as the cap applies to their staff working abroad.

There is too, an argument to be made that the bonus cap reduces the flexibility of banks to manage costs at times of economic difficulty. This is because bonus caps inevitably increase the fixed component of employees’ salaries, which unlike bonuses, cannot be reduced when profits are down.

The new UK government then, have an apparently strong case to make. Removing the cap could have short-term benefits, and the idea has been widely welcomed[12] by many prominent voices in banking.

But research into banking bonuses suggests caution, with evidence of a direct relationship[13] between “variable executive remuneration” (performance dependent bonuses) and risk taking. In the US for example, it has been found that bank CEOs with pay incentives linked to risk took on higher levels of risk[14] in the run up to the financial crisis. And financial firms where pay levels rewarded a short-term approach were more exposed[15] to subprime credit risk and performed poorly during the crisis.

The new UK chancellor, a man with a plan? EPA-EFE/Neil Hall[16]

Politically speaking, it could be seen as a highly insensitive move for a new government, as the effect of energy and food prices prove devastating for vast numbers of households. Is it really a wise move to increasing bankers’ already high incomes[17] when real wages of others are decreasing during a cost-of-living crisis?

Those who support ditching the cap should also consider whether or not it would really boost the UK’s financial sector, which may have more fundamental problems. After Brexit, around 43% of the largest UK financial institutions announced plans to move some of their business and staff to the EU[18], where bonuses are also capped.

And what about the long-term consequences of deregulation? Banks are not like other business. The public depends on them, and economies cannot function without them. When they fail, they drag down the whole economy down with them, with catastrophic outcomes.

Heavier bank regulation, including the bonus cap, was a response to the financial crisis and the need to avoid a repeat of its shattering consequences. It was introduced to help maintain financial stability.

In the current economic climate, the new government should be cautious and carefully consider the motives of those regulators. Taking big risks for potential short-term financial gain is to be avoided – whether you’re a bank or a national government.