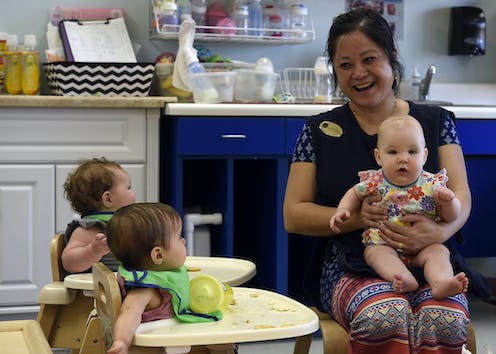 The federal government has rolled out[1] new Child Care Subsidy[2] arrangements based on parents’ earnings. Recent policy changes emphasise the need for quality childcare. To this end, policy has promoted minimum educational qualifications for childcare workers and increased reliance on market principles.

Often forgotten in the middle of all these changes are the childcare workers themselves, known as “educators”. In particular, family day care[3] educators have been conspicuously absent in discussions.

Historically, these workers have been at the bottom of the early childhood education and care work hierarchy[4]. They have been the least visible, most isolated, and lowest paid.

With even federal education minister Simon Birmingham encouraging families to shop around[6] for cheap childcare, many of these workers end up having to cut their rates to attract families.

Family day care workers have much in common with home-based workers in the garment industry. Migrant women are overrepresented in both types of work. The employment is uncertain and their work conditions are often poor.

However, our research[7] shows that garment workers have benefited from better regulation and representation, and this would help family day care workers too.

Who provides family day care, and how are they regulated?

Family day care is different from other forms of early childhood education and care. The workers are home-based and are not employees. Under federal law, they are considered independent contractors. According to the peak body Family Day Care Australia[8], there are more than 22,000 of these workers.

Read more: A new definition of 'worker' could protect many from exploitation[9]

Most of these workers are women. The work allows them to contribute financially to their household, while still being able to care for their own family. They operate as small businesses, independently contracted to a family day care coordination unit.

However, the usual association of self-employment with independence and entrepreneurship does not hold in this case. The business cannot be expanded, sold, or operated independently of the scheme.

These educators work long hours and are unable to control or limit them. With the marketisation drive, many have had to cut rates to be competitive.

Any changes in their operation are highly regulated. Workers spend a lot of time completing paperwork for compliance.

Family day care also attracts a lot of migrant women. A 2013 ACECQA report[10] indicated that nearly two in five (38%) of these workers speak a language other than English at home.

Most of the women migrants arrive on a dependant visa[11]. It’s difficult for them to find other jobs due to lack of recognition of qualifications and experience[12] from their home countries, lack of local experience, and discrimination in the labour market[13]. They also lack social support in their new country.

Entry into the childcare sector is relatively easy. Childcare is widely considered to come “naturally” to women. Therefore, many women are pushed into this work, and family day care in particular, so that they can also look after their own children. In fact, government policy[14] frames family day care as an important career pathway for migrant women.

However, in reality, these women experience isolation due to long hours, inflexible schedules, and the compliance workload.

In most cases, all these activities are undertaken at low pay. In 2014, the government announced cuts to the Community Support Program[15]. Under this program, well-established day care centres supported family day care operators. These cuts, along with strict eligibility conditions[16], have increased the uncertainty[17] for family day care workers.

Many now have to find a new scheme with which to associate for referrals. In some cases these are not local, with the result that educators are left to find new clients on their own.

For migrant educators, this can be difficult. They do not have the network. They also often face racial discrimination[18].

How does this compare to garment workers?

Despite the many common features of family day care educators and home-based workers in the garment industry, our research[20] has shown the regulation of their work is very different.

Because of advocacy by the unions (TCFUA and FairWear) for garment homeworkers, they are deemed to be employees under federal law. This gives them legislative protections under the Fair Work Act 2009, including the right to a minimum wage, long service leave, and superannuation. They are also protected from unfair dismissal.

In the case of garment homeworkers, advocacy focused on the workers. However, advocacy around childcare has focused mainly on the needs of working parents and access to affordable childcare, rather than on the pay and conditions of the workers. Family day care homeworkers have been left at the mercy of market forces.

Childcare policy in Australia has focused on human capital – present and future. It has sought to help new mothers to return to work and provide the next generation with a strong foundation.

It is time to recognise the essential role of family day care workers in providing this foundation. Their voice and the advocates working to improve their protection need to be heard.

Read more: Childcare may be expensive, but it's worth it in the long run[21]