The Parliamentary Budget Office (PBO) has just released a report[1] on trends in Commonwealth taxation receipts. While supporting the expectations of a budget in balance by 2019-20, it exposes worrying trends in the balance of the burden of taxes in Australia. In particular, its analysis of trends in the composition of tax revenue identifies an increasing reliance on personal income tax.

The PBO shows that tax revenue from labour (mostly income tax) was 8.6% of GDP in 1971-72. By 2015/16, this had risen to 12.6% of GDP. Over the same period, tax collections from capital (mostly company tax) as a percentage of GDP was virtually unchanged, from 3.3% to 3.2% – although this increased noticeably during the “economic boom”, which ended when the Global Financial Crisis (GFC) hit in 2007.

Taxes on consumption (such a GST and excise duties) were 5.3% of GDP in 1971-72 and 5.7% of GDP in 2015-16. While the introduction of the GST in July 2001 raised consumption taxes temporarily, revenue from both GST and particularly excise taxes has been in decline as a percent of GDP since.

Figure 2 from the report shows these trends over the decades. 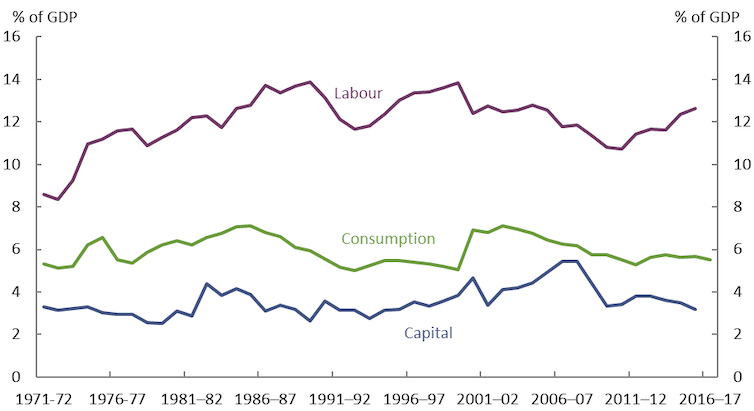 The main emphasis of the PBO report is on the period since 2001-02. The chart below shows the increased reliance on income tax and declining importance of taxes on consumption and capital. 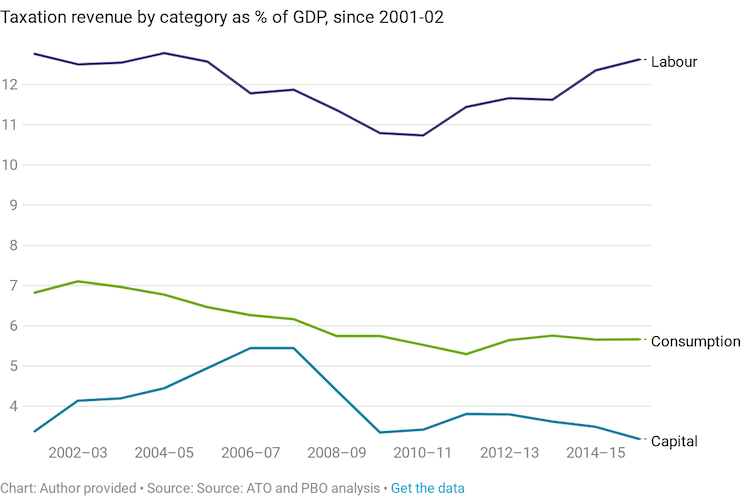 What is driving these shifts? The main reason for the rise in income tax revenue is “bracket creep” as incomes increase and taxpayers move into higher marginal tax brackets. This is due to successive governments not fully indexing tax brackets to increases in CPI or average earnings. Meanwhile, consumers have been changing their tastes and responding to prices by altering their consumption patterns. The so-called “sin taxes”, or rates of excise duties on alcohol and tobacco, have increased significantly over time. This has been particularly true for tobacco where the volume of consumption has fallen as fewer people smoke and those who do smoke less. However, the percentage fall in consumption has been less than the percentage rise in tax, so tobacco tax revenue has risen. For alcohol, consumers have been switching from more highly taxed beer to wine, which is more lightly taxed. For instance, a full-strength beer from your bottle shop carries a tax of $37.10 per litre of alcohol. A moderately priced bottle of wine bears a tax less than half that ($17.60 per litre). What might be considered a distortion in the taxing of alcohol means that changes in tastes towards drinking wine reduce tax revenue. The system of taxing alcohol is distorting in that encourages changing consumption habits away from beer drinking to wine. Fuel excise is levied on a number of fuels but revenue comes mainly from petrol sales. The indexing of fuel excise rates was abolished in 2001 before being reintroduced in 2014. This reduction in the real excise rates was accompanied by significant reduction in the volume of fuel per household, from 11.4 L/km in 2001 to 10.6 L/km in 2016, as vehicles became more fuel-efficient. The combination of reduced real excise rates and reduced consumption have reduced fuel excise revenue as a percentage of GDP. The GST, one of the principal aims of which was to provide a broadly based growth tax, is declining in relative importance. This is mainly due to the exemptions from the GST base. For instance, spending on education and health, which are exempt from GST, is growing faster than spending on other goods and services. There is also some loss in revenue due to online purchases from overseas, which the government is trying to address. As the share of consumers’ spending continues to switch from GST-liable to GST-exempt items the share of GST revenue will continue to fall. Company taxes have diminished in importance in Australia and elsewhere because of the way multinational companies can arrange their tax liabilities across national borders to minimise tax. However, there is also worldwide recognition of the need to reduce company tax rates because of the detrimental effects these have on investment and growth. The need to cut ‘deadweight loss’ When discussing taxes economist often refer to “deadweight loss”, which is the loss to the economy over and above the amount recouped in tax revenue. When revenue is taken from individuals or companies this results in less of a service or good being produced. It is argued that governments should put more reliance on taxes that cause less distortion – less deadweight loss. That is, they should have as little effect on individuals’ and firms’ behaviour as possible. A broad-based GST is efficient because all goods and services bear the same tax rate and therefore will not change relative consumption. It is exemptions that bring about inefficiency by encouraging consumption of untaxed items and discouraging consumption of taxed items. Taxing wine more lightly than beer encourages wine consumption at the expense of beer. The Australian Treasury has named company tax and income tax as having the “biggest deadweight loss” of all the Commonwealth taxes[3]. International research backs this up. The deadweight loss falls on consumers and shareholders but mostly on workers and wages through lower investment. The Treasury estimates the deadweight loss of company tax could be more than half the revenue raised from taxation. For income taxes, the deadweight loss is estimated to be 21 cents for every dollar of revenue. This comes about from reduced incentives to work, save or invest. The PBO report suggests that with continuing trends in taxation revenue the budget’s reliance on personal income tax will increase if current levels of Commonwealth taxation are maintained as a percentage of GDP. While proposals to reduce company tax rates will reduce inefficiency of taxes somewhat, a heavy and increasing reliance on personal income tax points to the need for substantial tax reform. But that’s something neither major party seems prepared to do.