Rising inequality is a concern across the developed economies, including Australia where top earners’ pay has soared to a 17-year high while ordinary workers’ wage growth has been the lowest on record. And that’s ultimately bad news for economic growth. This is longer than the usual Conversation article, so allow some time to read and enjoy.

In the last decade or more, economic growth has slowed across the Western world, although a belated though weak recovery has been under way since around 2017. In the US, for example, growth in gross output per capita averages around 1% a year[1] this century. That’s about half the average rate during the second half of the 20th century. 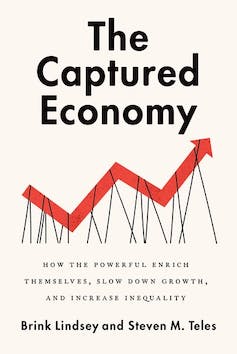 American economist Arthur Okun famously argued there was a trade-off[3] between equality and economic efficiency, implying little chance of high inequality and sluggish economic growth occurring together. Yet this is exactly what is happening in the US. What has gone wrong?

In The Captured Economy[4], Brink Lindsey and Steven Teles explore US economic sectors such as finance, land use, occupational licensing and intellectual property rights. They argue powerful interests have captured these sectors and are using the state to distort markets to their advantage. This kind of rent-seeking[5] is weakening growth and driving up inequality. As the authors put it:

Across a number of sectors, the US economy has become less open to competition and more clogged by insider-protecting deals … Those deals make our economy less dynamic and innovative, leading to slower economic growth … At the same time, they redistribute income and wealth upwards to elites in a position to exploit the political system to their favour.

Read more: Why businesses want the ear of government and are willing to pay for it[6]

This special dealing is but one facet of a much wider problem of competing claims for economic resources increasingly damaging Western economies. The arguments by Lindsey and Teles concern dysfunctions on the supply side of the economy.

In our recent book, Fair Share: Competing Claims and Australia’s Economic Future[7], Michael Keating and I argue that even bigger competing claims and distributional problems are now affecting the demand side of Western economies. These problems are also producing weak economic growth and rising inequality.

Time to pay attention to demand 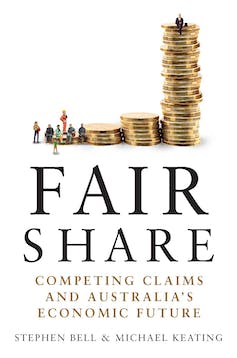 MUP[9] But how are these two outcomes connected? In Fair Share, we argue that rising inequality is weakening economic growth across the advanced economies by reducing aggregate demand[10]. Our account differs from mainstream economics, which argues that growth stems mainly from the supply side of the economy. In recent decades many neoliberal, supply-side policies have been implemented. The recent sluggish pattern of growth calls the supply-side theory into question. Indeed, the gap between theory and reality has prompted former US treasury secretary Lawrence Summers to argue[11] that “the events of the last decade should precipitate a crisis in the field of macroeconomics”. Some salient facts on the demand side are increasingly hard to ignore. Most Western economies have been marked by increased inequality since the 1980s[12]. Wage shares[13] have fallen[14]. Even more important has been the rise in income inequality. The wage increases that have occurred have been largely concentrated among the top income earners. These “winners” have a lower propensity to consume than those in the lower deciles of earnings distribution. As a result, too much income inequality and slow wages growth relative to productivity growth risk a continuing shortfall in demand and hence weaker economic growth. Prior to the Global Financial Crisis (GFC), many economic policies sought to avoid this shortfall in aggregate demand. This did so either by maintaining a very competitive exchange rate to support export-led growth (e.g. China, Germany) or, more often, by increasing the availability of consumer credit to support consumer demand (e.g. the US, UK). Neither of these strategies has proved viable in the longer run. First, not all countries can be net exporters at the same time. Second, the required growth in consumer credit became increasingly risky, and eventually helped fuel the GFC. Since then, the advanced economies have experienced protracted stagnation and a weak recovery due to a shortfall in aggregate demand. The longer this shortfall continues, the greater the risk that the rate of increase in potential output will also slow. The impact on economic output is due to lack of new investment, on which technological progress depends, and atrophying of workforce skills when labour is not fully employed. Indeed, the combination of low unemployment and slow economic growth suggests this slowdown in potential output growth is already occurring in the US. More generally, however, competing economic claims can potentially deliver various combinations of inflation, wage stagnation, growing inequality, weak demand and slower economic growth. Our central proposition in Fair Share links income distribution and economic growth. Why growth depends on balanced distribution Western capitalism has always run on a fairly narrow distributional path. If the distributional balance gets too far out of kilter in either direction the threats of inadequate aggregate demand and weak growth are likely to emerge. As we saw in the 1970s, pursuit of excessive wage increases risks stagflation[15], resulting in inadequate investment and rising unemployment. On the other hand, and as is happening now, a significant shift towards wage stagnation and increased income inequality risks slower growth through inadequate demand and consumption. Hence, it is the distributional shifts, in pursuit of higher wages in the 1970s and more recently in favour of capital and the highest-income groups, that have largely been responsible for the difficulties in both epochs in maintaining growth in the advanced capitalist economies. 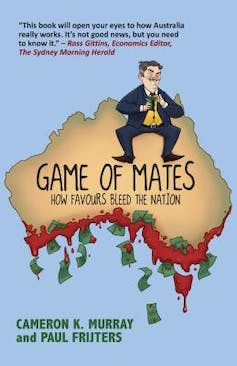 Game of Mates. gameofmates.com[16] Our theory thus suggests that the problems of stagflation in the 1970s were not as far removed from today’s problems as one might think. The root cause of the problems across both eras has essentially been distributional changes. Some analysts argue that regulatory and other changes have altered the relative power of those involved in competing claims, with workers and wage levels, in particular, losing out. Others, such as Lindsay and Teles, argue returns are skewed by oligopolistic competition, rent-seeking and other forms of market power and powerlessness (see also Cameron Murray[17] and Paul Frijters[18]’ Games of Mates[19] on Australia). Read more: Speaking with: Cameron Murray on grey corruption and the 'Game of Mates'[20] We acknowledge both of these changes but argue that the biggest changes in income distribution have come from technological changes that have hollowed out middle-income jobs, while any relative labour shortages have tended to be skill-biased. These two factors are the main drivers of increased income polarisation. Furthermore, to the extent that trade-union power matters, we think changes in the industrial and occupational structure of the workforce, in response to technological change, have largely been responsible for reduced trade union membership and the loss of bargaining power. What should governments do about this? In response, governments should aim to boost wages and redress growing income inequality. Any such strategy will be most effective if it focuses on responding to the technological changes that are the prime cause of rising inequality. As Thomas Piketty concluded[21] in the most significant analysis of inequality[22] published this century: To sum up: the best way to increase wages and reduce wage inequalities in the long run is to invest in education and skills. We argue therefore that education and training need to be boosted to help workers cope with changing markets and job opportunities. This approach can be expected to boost both aggregate demand and supply. Direct measures to boost lower incomes may also be needed to improve the social safety net for those who miss out. More generally, the successful continuation of the open-economy model, and indeed the sustainability of capitalist democracy, will depend upon the successful resolution of competing claims. In particular, this requires a fair sharing of the gains from increased economic production and a tight link between wages and productivity growth. It is certainly clear that the supply-side, neoliberal policies of recent decades have largely run their course in many advanced economies. Too often the starting premise of the supply-side agenda is that the role of government should be minimised through further deregulation and tax cuts. However, the nature of many of today’s problems requires government to be more interventionist rather than less, while still maintaining the key strengths of an open, liberal, market economy. The new focus of policy must be on the demand side. The failure to reasonably share income and educational opportunities is creating a highly volatile mix of unhappy “losers”. Hence, we see a growing political backlash, the rise of right-wing populism and extremism, Brexit, Trump etc. The backlash against globalisation and economic restructuring is real and growing. It poses a threat to economic development and to liberal democratic capitalism. All this has led commentators such as German sociologist Wolfgang Streeck to refer to “the crises of democratic capitalism[23]”, featuring “an endemic and essentially irreconcilable conflict between capitalist markets and democratic politics”. Perhaps so, yet capitalist democracies have managed to do much better in the past, especially during the post-war golden age of the 1950s and 1960s. What does this mean for Australia? Even today some countries are handling the situation better than others, suggesting politics and policies can make a difference. Australia is a case in point. In recent decades reforms to improve market flexibility in Australia have underpinned one of the longest expansions in capitalist history[24]. At the same time the wage share[25] in Australia in 2015 was about the same as in 1990 and a bit higher than in 1960. In addition, Australia has possibly the most efficient redistributive system[26] of all the advanced economies. Under the Hawke and Keating Labor governments’ Accord[27] with the trade unions, the social wage increased substantially faster than other incomes. Read more: Who gets what? Who pays for it? How incomes, taxes and benefits work out for Australians[28] Nevertheless, although income inequality has risen less in Australia than in many overseas countries, it has risen here too. In the last few years there are clear signs that wages are stagnating[29] and household debt levels are now very high[30]. Thus, it is imperative for Australia that it adopts a more growth-oriented income distribution. Key elements include wage-supporting measures and ensuring people are better equipped to change the organisation of existing jobs and, in many cases, move to the higher-skilled and well-paid jobs that technology is often creating. A new agenda is needed. We have to recognise that economic growth inevitably involves economic transformation, based on innovation and technological change. Thus, contrary to the assumptions many economists make, it is highly probable that economic growth will impact on the distribution of incomes. This of itself can create future problems for the sustainability of that growth. The bottom line, economically and politically, is that governments need to be prepared to promote demand as well as supply. Increasingly, we can no longer escape the distributional issues at hand. The winners will need to help the losers through more effective support and a degree of redistribution – especially if things get worse through ongoing wage stagnation and rising resistance to the perceived inequities of the present economic system.