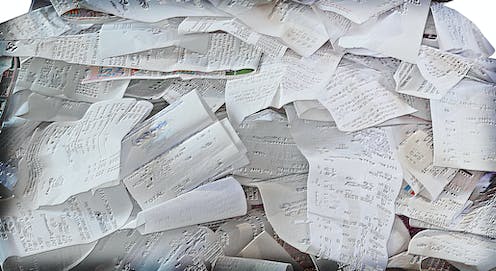 Ever wondered why you’re still collecting receipts on the off-chance the Tax Office wants to see them?

A decade ago, fired up by what he’d read in the Henry Tax Review[1], Labor Treasurer Wayne Swan promised to end[2] what he said was the “hassle of shoeboxes full of receipts”.

From 2012 onwards everyone would be offered a standard deduction of $500 in lieu of claiming work-related and tax-preparation expenses. It was to climb to $1,000 from 2013. 6.4 million Australians could stop stuffing shoeboxes.

Then a year later his focus changed. He had decided not to proceed[3] because of a separate change to the tax-free threshold he said would free 1 million taxpayers from lodging returns.

As a result, we’ve kept stuffing receipts into shoeboxes (and email archive boxes).

Laundry, the use of cars… we’re claiming billions

Overclaiming appears to be rife[5].

According to the Tax Office, while many of the overclaimed deductions are small, collectively they constitute “a significant amount of lost revenue”.

We have used Tax Office data to calculate ways in which we could revive Swan’s proposal in order to give everyone who wants it a standard deduction (and others more, up to a cap) without increasing the total paid out.

We could make most of it automatic

The data has helped us come up with four options[6], each of which our modelling tells us would provide a good balance between increased simplicity for most and limits on deductions for a few, costing no more than at present.

Many of us would be better off, a few worse off

The Blueprint Institute[8] has put forward a different proposal for a $3,000 standard deduction covering work-related and a range of other expenses.

Unlike the options we have put forward, the Institute’s proposal is far from revenue-neutral — on its own estimate costing tax revenue $5 billion per year.

Read more: Be careful what you claim for when working from home. There are capital gains tax risks[9]

A bolder way of simplifying the system would be to abolish[10] work-related deductions altogether, as New Zealand did in 1987.

Arguments for keeping deductions in some form, are that people have grown used to them, and without them, occupations where big work-related expenses are required would become less attractive.

Our reform options suggest it is possible to make big gains in simplicity (allowing the vast majority of taxpayers to stop stuffing receipts into shoeboxes) while disadvantaging only a few and costing the budget nothing.