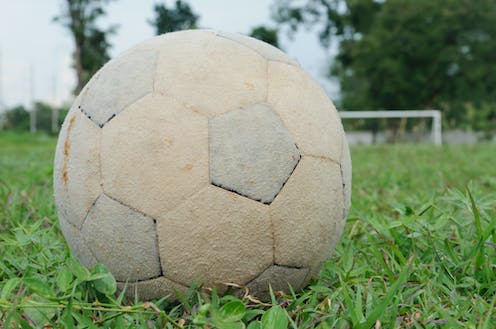 Over 80%[1] of the world’s high-quality hand-stitched footballs begin with the home-based work of female villagers in Pakistan’s Sialkot region[2].

These women belong to one of the most vulnerable groups in the global economy. Working from home and poorly paid, they experience conditions familiar to those in precarious jobs in developing and developed countries alike.

They are paid by the piece rather than earning a wage. They lack job contracts, social security and guarantees of work. And they must deal with intermediary subcontractors rather than their “real” employers.

However, the best course of action is not to outlaw this work. Rather it’s to regulate it and provide institutional support for their collective organisation.

This is because, when viewed in the context of their family and social networks rather than in an individualistic framework, the chance to earn even a low cash income has improved village women’s economic, social and psychological well-being.

Football manufacturing in Sialkot dates back[3] to the early 1900s, when male members of the leather-working caste supplied sporting goods to British India.

By 1972, the work had shifted to small factories. But since then manufacturers have circumvented worker protection laws by shifting labour-intensive processes such as hand-stitching to village women working at home.

Researchers[4] have suggested a number of reasons for the workers to prefer home-based work. This includes avoiding the costs of on-site work and the flexibility of being able to combine work with family responsibilities.

On the other side, it’s been argued being tied to the home is a constraint on entry into public life and wider occupational choice. And even bringing in money does not empower women to claim an equal division of labour in housework.

Overwhelmingly, the women we interviewed[6] saw labour market participation through homeworking as vital to their economic well-being.

Lacking opportunities for formal education and skills training, they saw football hand-stitching as a valuable skill.

In terms of social standing, home-based work was a much more respected and safer option than factory-based work.

Most importantly, the work provided the opportunity to improve their children’s life opportunities through education:

Now I have no other desire but to provide education to my children so they can establish themselves in their lives […] My children go to government school and somehow their school expenditure is managed from football stitching.

This should not diminish our appreciation of the clear deficits of labour and human rights, in relation to piecework and home-based work.

Read more: Protecting the rights of the digital workforce in the 'gig' economy[7]

The Sialkot workers incur the expenses[8] of supplying needles, wax and tools, as well as energy costs and loss of space in a single-room house.

Subcontractors arbitrarily deduct[9] “repair money” costs for allegedly defective stitching. Without any social security mechanism, homeworkers are locked into a relationship with the subcontractor, exacerbated by the family’s debt bondage and the contractor’s supply of raw material.

The piece rate has only just kept pace with inflation. Young unmarried women hand their earnings to the family, with no opportunity for saving. Without social security, medical expenses can be crippling.

Informal and ‘gig’ work: two sides of the same coin?

In both rich and poor countries precarious work arrangements are spreading. The notion of “gig” work is generally an emerging trend in developed economies, while home-based work is mainly discussed as an example of work in the informal economy, performed by 60% of the world’s workers globally[10].

Both these forms of work are insecure, and neither offers the promised flexibility to organise work independently. In reality, there’s limited control over total hours of work. Efforts to vary the quantity and rhythm of work risk serious repercussions for future income and employment opportunities.

Nevertheless, just as we are seeing the beginnings of organisation by gig workers in Britain and Australia, in Sialkot there’s also room for collective action to mitigate the exploitative aspects while realising the contribution of this work to rural women’s well-being.