When Debbie (not her real name) lost her main client and was left without a reliable income, the sole trader sold her home and adjoining investment unit to pay off her debts and ensure she had the means to support her daughter and herself.

But things didn’t work out as she had hoped.

A year later she was still mired in debt – only now to the Australian Tax Office, owing more than A$70,000 in capital gains tax from the sale of the investment property. By the time the payment deadline came, she still owed about A$61,000 plus A$13,500 in ATO-charged interest.

So she applied for tax relief under the “serious hardship” relief provisions that have been part of Australian tax law since 1915.

Her case might seem exactly the sort of reason why Australia’s Taxation Administration Act[1] gives the Commissioner of Taxation discretion to release individuals “in whole or in part” from tax debts, if they will “suffer serious hardship” by being required to pay.

Debbie had always paid her taxes on time. A single mother, she had never drawn child-support payments. She was not in good health, having had breast cancer and depression. But her application was rejected. Twice.

Because Debbie’s claim had a fatal flaw, according to the rules governing the tax commissioner’s discretion. She couldn’t show that having her tax debt waived would, on its own, save her from serious financial hardship.

That is, the rules effectively say a tax debt can only be waived if it is the only debt pushing a person into serious hardship. But even without the tax debt, Debbie couldn’t meet her living expenses. Her application was therefore rejected.

So, perversely, the greater the financial hardship a person finds themselves in, the less likely a tax debt will be waived.

This, and a few other significant quirks, is why the ATO’s tax relief rules need reform.

No published data since 2013

We know Debbie’s story because she is one of a very small number that have appealed the tax commissioner’s decision to the federal Administrative Appeals Tribunal.

Just 34 appeals have been made in the past 50 years, according to our analysis[2]. All but four lost those appeals.

One interpretation of these numbers is the tax office almost always makes the right decision – granting relief when appropriate and denying it when not. We’re not convinced.

How many people apply and are granted relief in any year? We don’t know.

The Australian Tax Office hasn’t published those figures since 2013. The numbers for that year show about 15,000 people applied. About 2,500 were granted full or partial tax debt forgiveness.

We can only speculate about why this data is no longer published. But one effect is to minimise awareness that people in financial hardship can apply for tax debt relief. Our research suggests[3] many more than 15,000 people could potentially qualify. 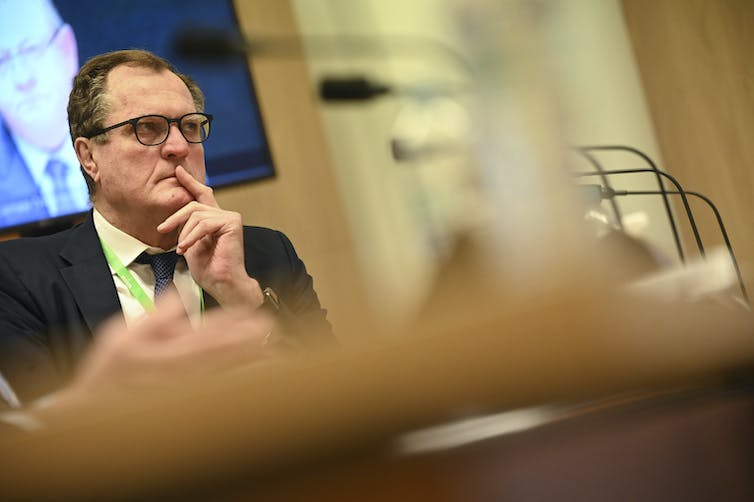 Commissioner of Taxation Chris Jordan before a Senate inquiry on June 9 2020. The rules give him limited discretion to waive tax debts. Lukas Coch/AAP

But the perversities of the rules mean those most needing help don’t necessarily get it, as shown by the 34 cases we have examined.

The median tax debt in those cases was about A$80,000. A majority (19 of the 34) represented themselves, while the tax office was represented by lawyers. The reasons they found themselves in debt were generally complex – involving serious mental and physical health problems, relationship breakdowns, carer responsibilities preventing full-time return to work, and so on. Seven were self-employed.

Read more: Hard bump ahead? Drop in insolvencies and bankruptcies is a ticking time bomb[4]

Looking at the reasons most these claims were rejected, we see the need for three key reforms.

1. The greater the hardship, the less relief offered

As outlined above, the tax commissioner can release someone from a tax debt only when it is “solely” the payment of that tax debt that will cause “serious hardship”.

This was the case in the two appeals that succeeded. In cases such as Debbie’s, no relief was granted because waiving the tax debt would not resolve all the person’s financial troubles.

This causal link should be removed.

2. Penalised for paying other debts

This leads to the second reform. Evidence of a person paying off other debts is grounds to disqualify them from tax debt relief.

The rationale is that tax obligations shouldn’t be treated as less important than other debts. But it has the perverse outcome that someone who pays off a credit card debt before their tax is effectively barred from serious hardship relief.

Rather than a “one strike and you’re out” approach, the law should recognise degrees of culpability - distinguishing between someone who deliberately and intentionally disregards their obligations and someone who gets in financial trouble due to losing their job, sickness, business failure, relationship breakdown and so on.

Arguably the most problematic aspect of the rules is they make no provision for financial difficulties arising from being a sole trader or running a small business. In particular, the rules exclude forgiving GST debts.

On one level this makes sense. GST is meant to be collected with every invoice, then forwarded to the tax office with quarterly Business Activity Statements. A GST debt is therefore pocketing other people’s tax.

But these days many people are forced into being small business people, such as through working as contractors. They can be overwhelmed by the paper work, and not have the cash to pay a bookkeeper to do it for them. In our experience from running a tax clinic[5], people who come to us for help on average are eight years behind on tax returns and seven years on business activity statements.

The rules should recognise this reality and allow GST-related tax liabilities to be forgiven in some circumstances.

Read more: Performers and sole traders find it hard to get JobKeeper in part because they get behind on their paperwork[6]

Time for a serious rethink

When someone is genuinely experiencing serious financial hardship, it is futile to chase them for money they cannot pay. Forcing them into bankruptcy doesn’t help anyone.

We need more compassionate rules that reflect the reality of why people find themselves in debt.

Such reform has been made even more urgent by the COVID economic crisis. Federal government subsidies and relaxation of normal rules have enabled many small businesses to stay afloat during the COVID crisis.

It hardly makes sense, given all the public money spent in other ways, for outdated tax-relief laws to force people into insolvency and bankruptcy now.