Politics remains mired in ideological preconceptions of what is optimal, often landing us with bad policy. Too often we see a simplistic and false dichotomy between partisan claims that markets are the best policy tool because they are efficient, or that government should lead because this ensures equity. This is a major drag on our progress and prosperity because today’s policy challenges typically require hybrid policy solutions: sophisticated combinations of government and market tools that promote equity and efficiency at the same time.

The 20th century can be seen as a process of trial and error through which we came to understand where governments or markets were more appropriate. Libertarian, free-market capitalism collapsed in the Great Depression. The welfare state, in which government sensibly intervened to overcome market failures in sectors like health care, saved capitalism from itself[1].

Read more: Not-for-profits must adapt as one arm of government's 'three-sector solutions'[2]

But, far from being a perfect system, the social democratic welfare states of the post-war years terminated in the horrors of stagflation: rising unemployment and inflation amid torpid economic growth. To overcome this, structural adjustment was needed to bring markets back into areas of policy where they had a comparative advantage.

Welfare states rolled back tariffs, price controls, subsidies and other distortions. They deregulated many markets to encourage open competition and the productivity improvements it brings.

This resulted in prolonged economic growth around the world from the mid-1980s until the Global Financial Crisis. It also accelerated growth in poor countries throughout Asia, dramatically reducing poverty and improving living standards.

A key factor in the long-term success of structural adjustment was whether the governments prosecuting it considered the compensation of losers from reform.

France and Japan had a strong focus on potential losers from change. Consequently, structural adjustment never took place. The state continued to dominate the policy space, and the French[3] and Japanese[4] economies stagnated.

In America and Britain, structural adjustment took place under neoliberal regimes (Reagan and Thatcher). These were ideologically committed to markets even where government had a clear role to play. Growth took off, but the gains overwhelmingly went to the privileged. Marginalised citizens saw their prosperity continue to flat-line.

As growth was not invested in mobility in the form of schools, hospitals and infrastructure, the losers from change were never reactivated. Today large portions of American society struggle with limited health and education[5]. They have low productivity and low wages: a waste of human resources. And, as we’ve seen in recent elections, they are very angry about it.

Read more: How gross inequality and crushed hopes have fed the rise of Donald Trump[6]

In Australia, Denmark and Canada, among others, structural adjustment was undertaken in a way that reaped the benefits of liberalisation while compensating losers from change. These countries put themselves on a long-term path that ensured both competition and opportunity by exploiting complementarities between markets and government.

Similarly, egalitarian policy settings without open competition lead to the dominance of insiders like belligerent unions at the expense of outsiders. This is evident in staggering levels of youth unemployment in France[7] and workforce casualisation in Japan[8]. 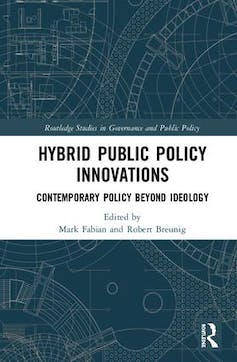 Routledge (2018)[9] Australia’s structural adjustment was begun in the twilight years of the Fraser government, prosecuted in earnest by Hawke and Keating and wound down by Howard. It has brought about several decades of growth with barely a budge in our Gini coefficient[10] (a measure of inequality). We distil some of the lessons of this period in our new book on hybrid policy design principles[11]. Australia’s structural reform was largely driven by a range of hybrid policies. These included the HECS system of higher education financing, our mixed public and private health system, and our unusually low-taxing[12] but highly targeted welfare system[13]. The result is a quality social safety net without unnecessary drag on the economy. Each of these policies brings to bear the strengths of governments and markets in tandem. This hybrid approach overcomes their respective weaknesses and ensures outcomes that both sides of politics can feel proud of. The HECS system replaced a prohibitively expensive free-tuition university system. Most university graduates go on to earn middle-class incomes, so why should taxpayers who didn’t attend university subsidise this? The HECS system includes a small subsidy to price in the broader benefits to the nation associated with education that go beyond the private benefits to the individual student. Ironically, including some tuition charges actually enhanced equality of opportunity by making it easier to scale up university admissions. Having the government act as the provider of loans to cover tuition fees overcomes the adverse selection issues that result in private markets undersupplying student loans, as in the United States. Some academically borderline students are a risky bet for private loans because they might default. But, as a group, many of these students would graduate if given the chance and earn higher incomes. They would then pay more tax. Through the HECS system, the government provides loans to all of these students. And, via those higher tax payments, it is then able to recover some of its losses from defaults. This efficiently promotes equality of opportunity. Finally, making loan repayments income-contingent ensures equity, especially for at-risk individuals like mothers who don’t return to the workforce for many years. Read more: Time for a blunt lesson on HECS and price signals[14] Grounded in evidence It is important to understand that hybrid policy designs are grounded in a rich body of theory and evidence. Our empirical understanding of the impacts of incentives, institutions and regulations on economic behaviour has grown tremendously in recent decades. So, too, has our ability to monitor the impact of individual policies and institutional or regulatory settings. We no longer need to rely on ideological conviction when choosing between different policy tools because we actually know what works in a lot of cases. We can further reduce our need to rely on conviction by attaching evidence-collection measures to policies as they are implemented. Randomised controlled trials[15], for example, are being widely utilised to test the efficacy of different policies. This ensures poor policy designs are identified and discarded while effective ones are scaled up. Well-designed policy implementation combined with detailed administrative data can allow us to evaluate programs even in the absence of randomised controlled trials. We have a wealth of tools at our disposal. Politicians can sometimes fear evidence in public policy because of its ability to disprove their sacred truths. But the effect of evidence-based public policy is not to eject normative issues from governance. Instead, it focuses normative debate on normative questions like the appropriate balance between efficiency and equity. That leaves technical and factual matters to be decided on the basis of knowledge rather than belief. Read more: Mounting housing stress underscores need for expert council to guide wayward policymaking[16] Challenges call for renewed reform Australia is in desperate need of a fresh round of hybrid policy reform. By the end of the 20th century we had exhausted the gains from marginally improving where government and markets are used individually in policy settings. The challenges we face today include making the most of the internet and automation, and responding to climate change, tax reform and urban and demographic change, to name a few. All require hybrid thinking to understand and solve. Australia was a pioneer of this in the past. Many of our systems remain at or near world best even as we have lost focus on policy reform. We can reclaim our leadership position by applying evidence-based hybrids.