While one sounds bad (the World Trade Organisation has rules that restrict tariffs) the other sounds understandable — if the European Union is imposing a carbon tax on its own products as Australia once did[3], surely it is reasonable to impose it on products from overseas.

The argument is that if a German steel manufacturer has to pay a tax of, say, $77 a tonne for the carbon it emits while making the steel, an Australian manufacturer should be charged the same when its product enters the country, unless it has already paid the same tax here.

To do otherwise would give the Australian product an unfair price advantage — it would create “carbon leakage” of the kind Australian businesses used to warn about[4] in the leadup to Australia’s carbon price.

The European Union approved the idea in principle on March 10[5].

The details are less than clear, in part because it is possible that carbon tariffs are not permitted under the rules of the World Trade Organisation to which European nations and most other nations belong.

The rules say taxes or “charges of any kind[6]” can only be imposed on imported products the same way as they are domestically.

That appears to mean that they can be imposed on importers but not on producers, which isn’t quite what the European Union has in mind.

Ideally the World Trade Organisation would be able to provide guidance, but (in part because of the actions of the US Trump administration) it isn’t really in a position to do.

…if only they were enforceable 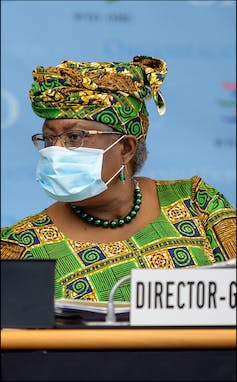 The WTO has a new director general in Ngozi Okonjo-Iweala[7] who took office this month, but it will remain in an “induced coma[8]” for as long as its appellate body is unable to hear disputes[9].

Under Trump, the US kept vetoing appointments[10] to the appellate body until the expiration of terms of its existing members meant it no longer had a quorum.

Disputes can still be initiated by countries such as Australia, forcing consultations, but without final determinations.

Although the European Union says it wants to ensure that its adjustment mechanism complies with the WTO’s rules, it hasn’t ruled out the possibility of relying on provisions that allow exceptions.

Both sides could make a case

The catch is these exceptions are not allowed to discriminate between countries and must not be disguised restrictions on trade.

It is arguable that an adjustment mechanism designed to protect the competitiveness of European industries will breach these provisions.

Read more: No point complaining about it, Australia will face carbon levies unless it changes course[12]

The European Union has suggested that border adjustments will be unnecessary when the rest of the world has matched it in committing to achieve net zero emissions by 2050, so long as these commitments are back up by real actions.

But that hasn’t happened yet, and despite talk by Prime Minister Scott Morrison of his “hope[13]” that Australia can get to net zero by 2050, Australia hasn’t made a commitment, and hasn’t backed it with tax-like instrument.

With any World Trade Organisation determination uncertain and perhaps impossible, apart from complaining[14] about carbon tariffs or border adjustments, there may be little Australia can do.