It’s not often centre-left economists disagree with each other – let alone get into a stoush. But it’s what happened over the last week.

On February 5 former US Treasury Secretary and National Economic Council Chair Larry Summers published an opinion piece[1] suggesting the Biden administration’s US$1.9 trillion bill might be “too big”.

I am known as a dove [one who supports low interest rates and generous government assistance] I believe that the absolute priority is to protect people and firms affected by COVID. Still, I agree with Summers. The $1.9 trillion program could overheat the economy so badly as to be counterproductive. Protection can be achieved with less.

This all caused a good deal of consternation within the Biden administration, and led the current Treasury Secretary Janet Yellen to push back hard[3], saying “we are in a huge hole with respect to the job market”.

further delay in approving a larger relief program would be a mistake. That ‘wait and see’ approach has proved to be deeply wrong since the pandemic began. The issue is what I have called the No. 1 rule of virus economics: If you want to help the economy, you have to stop the virus.

The case for restraint 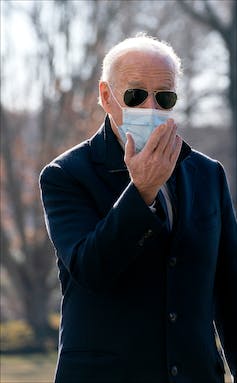 The core of Summers’ argument is that, according to the Congressional Budget Office, the economy is running $50 billion a month below it’s potential[5], an output gap that will decline to $20 billion a month over the course of the year.

The improvement is in part because of a $900 billion package approved in December under the Trump administration.

Summers points out the Biden administration’s extra $1.9 trillion package would be three times larger than the projected shortfall in output.

As a result, it would “set off inflationary pressures of a kind we have not seen in a generation, with consequences for the dollar and financial stability”.

As well, a package so large might preclude the future spending on infrastructure and productivity-enhancing measures that will be needed to overcome the sluggish growth (“secular stagnation[6]”) identified by Summers before COVID-19.

The case for bold action

Those who support the Biden plan argue it isn’t a traditional stimulus package of the kind Obama enacted in 2009 to get the economy out of recession. COVID is more like a natural disaster.

That said, about a quarter the $1.9 trillion will be spent on sending $1,400 cheques[7] to individuals, on top of the $600 cheques sent as part of the earlier package. That part looks more like a traditional stimulus measure than disaster relief.

The central controversy is whether the output gap[8] is large enough to accommodate the Biden spending without undue inflationary pressure.

Financial journalist Matt Yglesias has looked to the markets[9] for an answer.

He points out that

The resulting graph shows inflation expectation has moved back into the Federal Reserve’s target window of 2-3%.

Federal Reserve Bank of St. Louis[10] What this means depends on what the market thinks will happen to the package. If it thinks the full package will be enacted, it looks like an endorsement. The package should be enough to get inflation back to the target, but not enough to accelerate it beyond that. But if it thinks only a fraction will be enacted – maybe half or two-thirds – but what turns out to be enacted is the full package, it might mean the market expects inflation to run out of control, just as Summers and Blanchard suggest. So the markets provides clues, but no answer. It will give us a better steer when we are certain how much of the package will become a reality. Read more: Joe Biden sends a clear message to the watching world – America’s back[11] For now, it’s hard to tell who’s right: Summers and Blanchard, or the Biden administration. Given that the US Federal Reserve would put the brakes on inflation if it did start to take off, it’s probably wisest to back Biden and run the risk of spending too big rather than too small.