We are hearing an unusual amount from the Reserve Bank this week.

On Tuesday, after its first board meeting for the year, the bank outlined plans to spend another A$100 billion[1] it didn’t have (“created money”), to buy government bonds in order to keep interest rates down – so-called quantitative easing.

On Wednesday Governor Philip Lowe said he expected to keep the closely-watched inter-bank cash rate at its present all-time low of 0.10% for at least another three years[2].

And on Friday Lowe will give evidence to the parliament’s economics committee[3] in Canberra while in Sydney bank staff release updated forecasts[4].

Lowe told the press club that while Australia had a long way to go with its recovery, its economy had bounced back earlier and stronger than he expected.

He identified two key reasons[5]. One was Australia’s success in containing the virus.

The second was spending by Australian governments amounting to 15% of GDP.

It has provided a welcome boost to incomes and jobs and helped front load the recovery by creating incentives for people to bring forward spending.

But there’s no necessary reason to assume these successes will continue.

Lowe is optimistic about household spending, while acknowledging that over the next six months household income is likely to decline as JobKeeper and the JobSeeker extension unwind.

“Normally when income falls, so does consumption,” he said, before adding that “we are not in normal times”.

The extra savings over the past six months and the bigger financial buffers can support future spending – people will have more freedom to spend as restrictions are eased and be more willing to spend as uncertainty recedes. 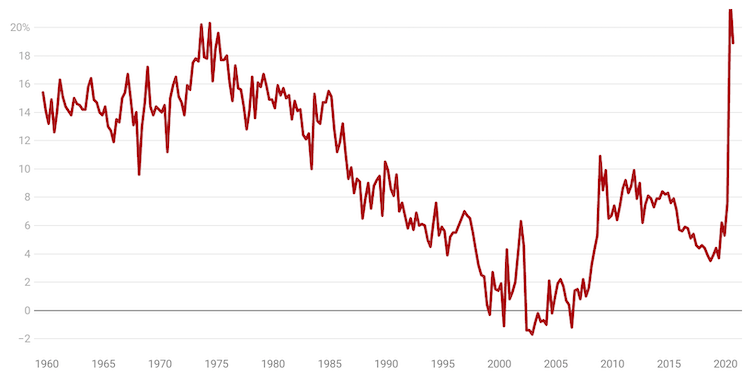 ABS Australian National Accounts[6] Australian households have indeed been saving an unprecedented proportion of their income, but will they really unwind this and the process of repairing their balance sheets at a time when the global pandemic is far from over and its anyone’s guess when the next one comes. Health risks aplenty On the health front, there are reasons to be concerned about Australia’s vaccine rollout strategy, as Steven Hamilton and I outlined this week[7]. More than 100 million people in 77 countries[8] have already been vaccinated. But none here, not until later this month. On Thursday the prime minister announced that he had secured an extra 10 million doses of the Pfizer vaccine, taking the total to 20 million, to which will be added 53.8 million doses of the Oxford University/AstraZeneca vaccine and 51 million doses of the Novavax vaccine. Read more: A little ray of sunshine as 2021 economic survey points to brighter times ahead[9] But to start with the rollout will be slow – only 80,000[10] Pfizer doses per week. A slow rollout means a slow recovery. The bank is forecasting an unemployment rate not much better than the one we’ve got by the end of the year. Economic risks continue One thing the governor clarified in his address to the press is that he is committed to the present inflation-targeting regime[11] that aims to keep consumer price inflation between 2% and 3% on average over time. Economists Warwick McKibbin, John Quiggin and I have argued that the bank should instead target growth in nominal gross domestic product[12], which is easier to identify than inflation and more directly impacts living standards. Read more: Reserve Bank Governor not for turning. No rate hike until unemployment near 4.5%[13] It looks as though Lowe doesn’t want to. How effective our vaccine strategy turns out to be, and how quickly the economy bounces back from pandemic is an open question. As the governor is increasingly fond of saying, “only time will tell[14]”.